A coordinate system is one which uses one or more numbers, or coordinates, to uniquely determine the position of a poi nt or other geometric element on a manifold such as Euclidean space.

A coordinate system is one which uses one or more numbers, or coordinates, to uniquely determine the position of a poi nt or other geometric element on a manifold such as Euclidean space. 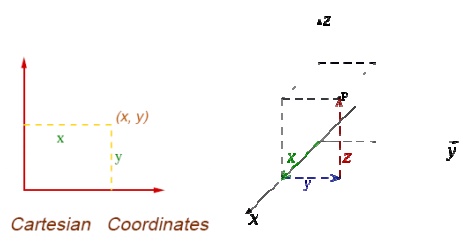 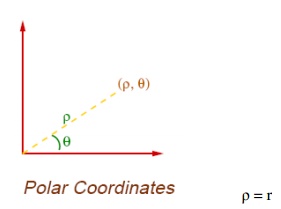 For a given angle θ, there is a single line through the pole whose angle with the polar axis is θ ( measured counter clockwise from the axis to the line). Then there is a unique point on this line whose signed distance from the or igin is r for given number r. For a gi ven pair of coordinates (r, θ) there is a single p oint, but any point is represented by many pairs of coordinates. For example (r, θ), (r, θ+2π) and (−r, θ+π) are all po lar coordinates for the same point. The pole is represented by (0, θ) for any value of θ.

The origin of the system is the point where all three coordinates can be given as zero. This is the intersection between the reference plane and the axis.

The axis is variously called the cylindrical or lon gitudinal axis, to differentiate it fro m the polar axis, which is the ray that lies in th e reference plane, starting at the origin and pointing in the reference direction. 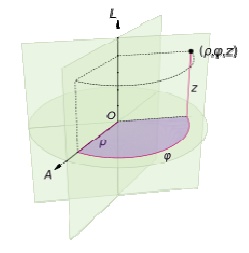 The distanc e from the axis may be called the radial distance or radius, while the angular coord inate is sometimes referred to as the angular position or as the azimuth.

A spherical c oordinate system is a coordinate system for three-dimensional space where the positi on of a point is specified by three numbers: the radial distance of that point from a fixe d origin, its polar angle measured from a fixe d zenith direction, and the azimuth angl e of its orthogonal projection on a reference plane that passes through the origin an d is orthogonal to the zenith, measured from a fixed reference direction on that plane . 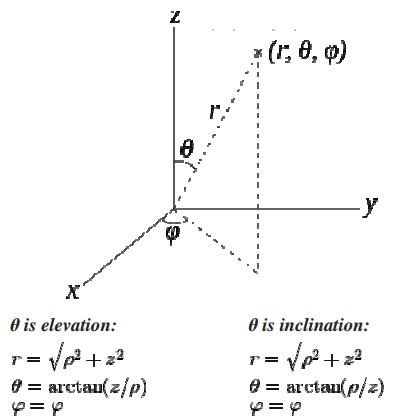