In our day-to-day life, we use infinitely many things with shapes like circle, triangle, square, rectangle, rhombus etc., don’t we?

In our day-to-day life, we use infinitely many things with shapes like circle, triangle, square, rectangle, rhombus etc., don’t we? We use them separately as well as with two or three or more shapes combined together as shown in the following figures.

What do we observe from the above figures?

The shape of a glass window is like a semi-circle placed over a rectangle whereas the front – facing wall of a model house looks like a triangle over a square.

Likewise, list the shapes used to make an invitation card and a locker.

Thus, two or more plane figures joined with the sides of same measure give rise to combined shapes.

The perimeter of a combined shape is the sum of all the lengths of the sides that form a closed boundary.

The combined shapes that we come across mostly in our day-to-day life are irregular polygons. To find the area of the given irregular polygon, we must identify the simple shapes in it, find their areas separately and then add them up.

For example, an irregular polygonal field given below can be split into known simpler shapes as under and then its area can be found.

A closed plane figure formed by three or more sides is called a ‘polygon’ .Based on the es, some of the polygons are named as given below.

If all sides and all angles of a polygon are equal, then it is called as a regular polygon.

All the sides of a rhombus are equal. Is it a regular polygon?

∴ It is not a regular polygon. 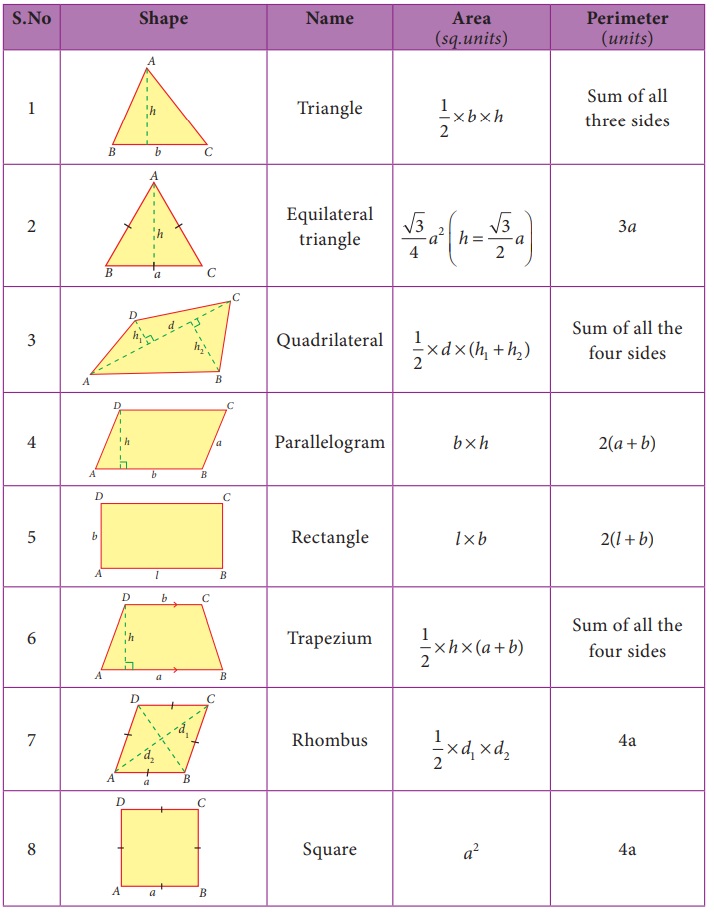