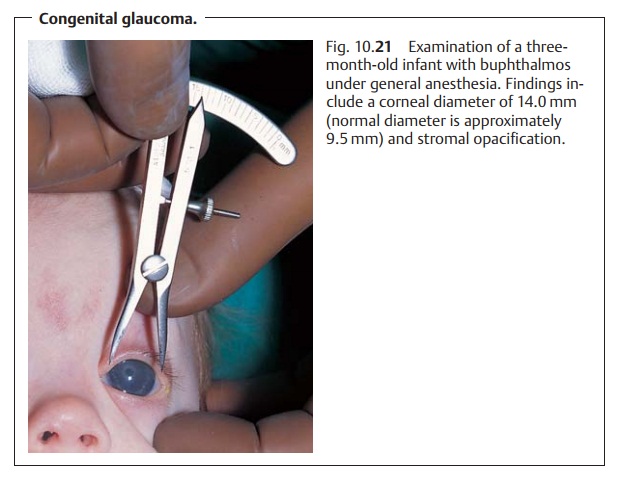 Any abnormal increase in intraocular pressure during the first years of life will cause dilatation of the wall of the globe, and especially of the cornea.

Any abnormal increase in intraocular pressure during the first years of life will cause dilatation of the wall of the globe, and especially of the cornea. The result is a characteristic, abnormally large eye (buphthalmos) with a progress-ive increase in corneal diameter. This is also referred to as hydrophthalmos or hydrophthalmia.

Today there is widespread public awareness of glaucoma in adults.

Unfortunately, this does not yet apply to glaucoma in children.

(See also physiology and pathophysiology of aqueous humor circu-lation): The iris inserts anteriorly far in the trabecular meshwork (Fig. 10.2). Embryonic mesodermal tissue in the form of a thin transparent membrane (Barkan’s membrane) covers the trabecular meshwork and impedes the flow of aqueous humor into the canal of Schlemm. Other abnormal ocular or systemic findings are lacking. 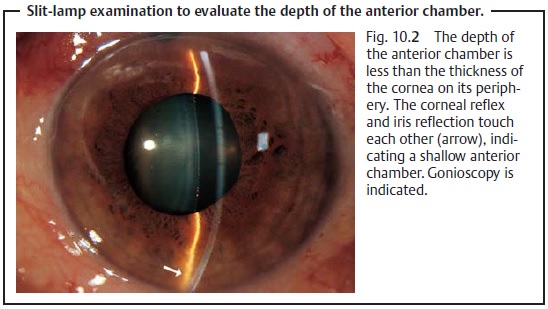 Aside from isolated buphthalmos, other ocular changes can lead to sec-ondary hydrophthalmos. These include:

Regardless of the cause of the increase in intraocular pressure, the objective signs and clinical symptoms of childhood forms of glaucoma are identical and should be apparent to any examining physician.

Classic signs include photophobia, epiphora, corneal opacifica-tion, and unilateral or bilateral enlargement of the cornea. These changes may be present from birth (in congenital glaucoma) or may develop shortly after birth or during the first few years of life.

Children with this disorder are irritable, poor eaters, and rub their eyes often. The behavior of some children may lead one to suspect mental retarda-tion.

Physicians should be alert to parents who boast about their child’s “big beautiful eyes” and should measure intraocular pressure.

It is essential to diagnose the disorder as early in the child’s life as possible to minimize the risk of loss of or irreparable damage to the child’s vision. 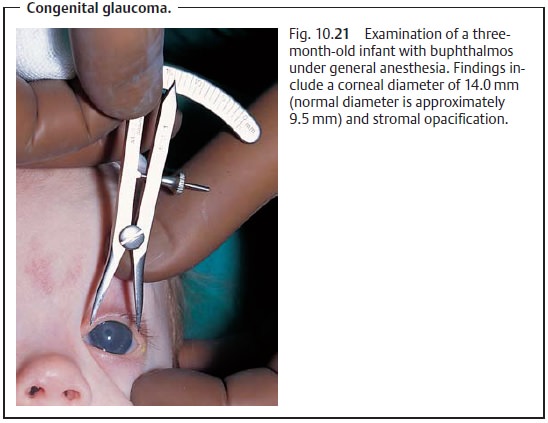 Measurement is facilitated by giving the hungry infant a bottle during the examination. Feeding distracts the baby, and a measurement usu-ally can be obtained easily. Such a measurement is usually far more accurate than one obtained under general anesthesia as narcotics, especially barbiturates and halothane, reduce intraocular pressure.

Optic disk ophthalmoscopy.The optic cup is a very sensitive indicator ofintraocular pressure, particularly in the phase in which permanent visual field defects occurs. Asymmetry in the optic cup can be helpful in diagnosing the disorder and in follow-up.

Special considerations: A glaucomatous optic cup in children may well bereversible. Often it will be significantly smaller within several hours of a successful trabeculotomy.

Inspection of the cornea.The cornea will appear whitish and opacified due toepithelial edema. Breaks in Descemet’s membrane can exacerbate an epithelial or stromal edema. These lesions, known as Haab’s striae, will exhibit a typical horizontal or curvilinear configuration.

The enlarged corneal diameter is a characteristic finding. The cornea nor-mally measures 9.5 mm on average in normal newborn infants. Enlargement to more than 10.5 mm suggests childhood glaucoma. Chronically elevated intraocular pressure in children under the age of three will lead to enlarge-ment of the entire globe.

Striae in Descemet’s membrane.In contrast to the horizontal Haab’s striae incongenital glaucoma, endothelial breaks can also occur as a result of injury during a forceps delivery (vertical striae), in keratoconus, and in deep ker-atitis.

None of these differential diagnoses are accompanied by elevated intraocular pressure.

Treatment: Childhood glaucomas are treated surgically. The prognosisimproves the earlier surgery is performed.

Principle and procedure of goniotomy.With a gonioscope in place on theeye, the goniotomy scalpel is advanced through the anterior chamber to the trabecular meshwork. The trabecular meshwork can now be incised as far the canal of Schlemm over an arc of about 120 degrees to permit drainage of the aqueous humor. Often two or three goniotomies at different locations are required to control intraocular pressure. These operations can only be per-formed when the cornea is clear enough to allow visualization of the struc-tures of the anterior chamber.

Principle and procedure of trabeculotomy.After a conjunctival flap andsplit-thickness scleral flap have been raised, access to the canal of Schlemm is gained through a radial incision, and the canal is probed with a trabeculo-tome. Then the trabeculotome is rotated into the anterior chamber (Fig. 10.22). This tears through the inner wall of the canal, the trabecular meshwork, and any embryonic tissue covering it to open a drainage route for the aqueous humor.

A higher rate of success is attributed to trabeculotomy when performed as an initial procedure. This operation can also be performed when the cornea is largely opacified. 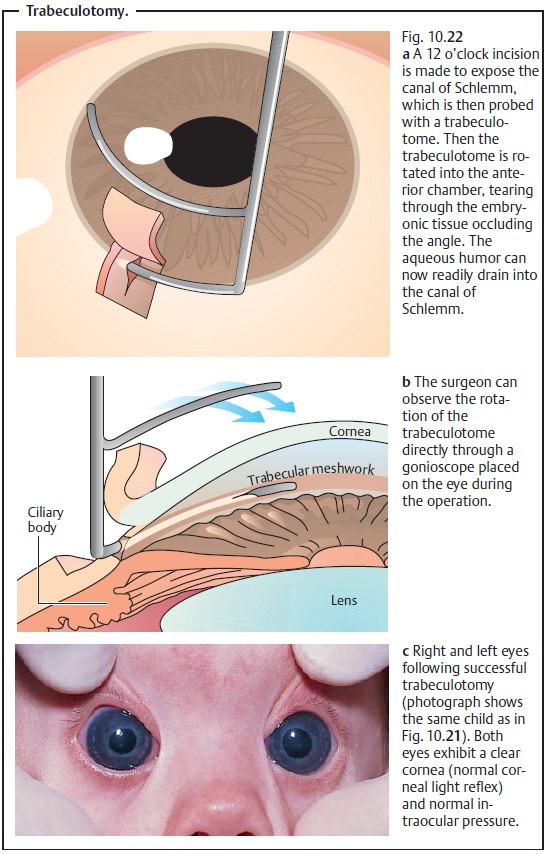 Goniotomies and trabeculotomies are not always successful.Even after apparently successful initial trabecular surgery, these children require a lifetime of follow-up examinations (initially several times a year and later once every year) as elevated intraocular pressure can recur, in which case repeat goniotomy or trabeculotomy is indicated.