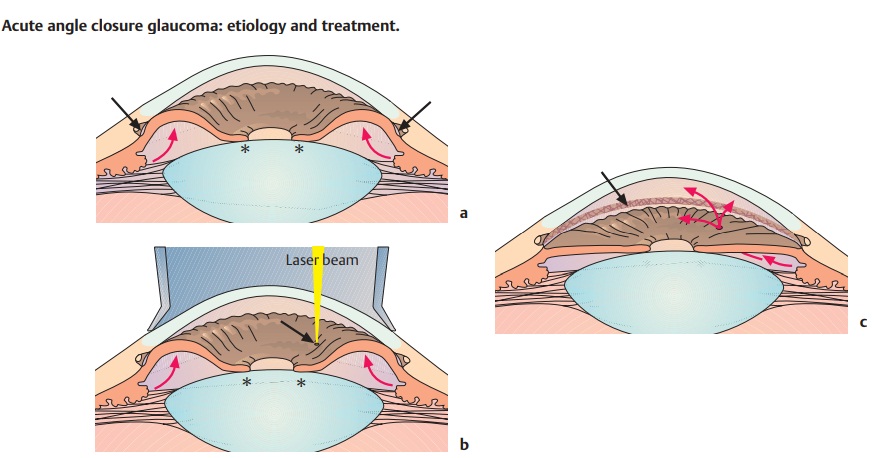 Acute episodic increase in intraocular pressure to several times the normal value (10 – 20 mm Hg) due to sudden blockage of drainage. Production of aqueous humor and trabecular resistance are normal.

Acute episodic increase in intraocular pressure to several times the normal value (10 – 20 mm Hg) due to sudden blockage of drainage. Production of aqueous humor and trabecular resistance are normal.

The incidence among persons over the age of 60 is one perthousand. Women are three times as likely to be affected as men. Inuit are more frequently affected than other ethnic groups, whereas the disorder is rare in blacks.

Anatomically predisposed eyes with shallow anterior chambers (see Fig. 10.1) pose a relative impediment to the flow of aqueous humor through the pupil. This pupillary block increases the pressure in the posterior cham-ber (Fig. 10.18a). The pressure displaces the iris anteriorly toward the trabecular meshwork, suddenly blocking the outflow of aqueous humor (angle closure). A typical glaucoma attack occurs unilaterally due to widening of the pupil either in dark surroundings and/or under emotional stress (dismay or fear). A typical situation is the evening mystery movie on television. Iatrogenic pharmacologic mydriasis and systemic psychotropic drugs can also trigger a glaucoma attack. 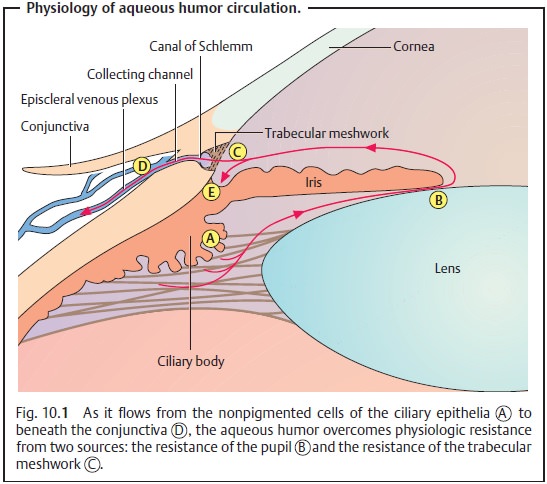 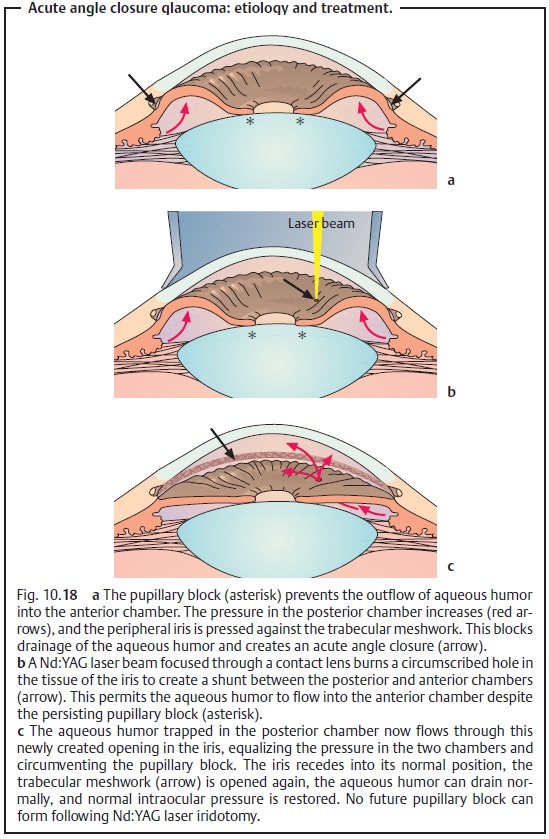 Bear in mind that mydriatic agents entail a risk of triggering a glaucoma attack by widening the pupil. Therefore, it is important to evaluate the depth of the anterior chamber in every patient even prior to a routine fundus examination.

Symptoms: Acute onset of intense pain. The elevated intraocular pressureacts on the corneal nerves (the ophthalmic nerve or first branch of the trigeminal nerve) to cause dull pain. This pain may be referred to the temples, back of the head, and jaws via the three branches of the trigeminal nerve, which can mask its ocular origin.

Nausea and vomiting occur due to irritation of the vagus nerve and can simu-late abdominal disorders. The generalized symptoms such as headache, vomiting, and nausea may dominate to the extent that the patient fails to notice local symptoms.

Diminished visual acuity.Patients notice obscured vision and colored halosaround lights in the affected eye. These symptoms are caused by the corneal epithelial edema precipitated by the enormous increase in pressure.

Prodromal symptoms.Patients report transitory episodes of blurred visionor the appearance of colored halos around lights prior to the attack. These prodromal symptoms may go unnoticed or may be dismissed as unimportant by the patient in mild episodes where the eye returns to normal. Early identi-fication of those risk patients with shallow anterior chambers and gonio-scopic findings is important as damage to the structures of the angle may be well advanced before clinical symptoms appear.

The full clinical syndrome of acute glaucoma will not always be present. The diminished visual acuity may go unnoticed if the other eye has nor-mal vision. Patients’ subjective perception of pain intensity can vary greatly.

The diagnosis is made on the basis of a triad of symptoms: 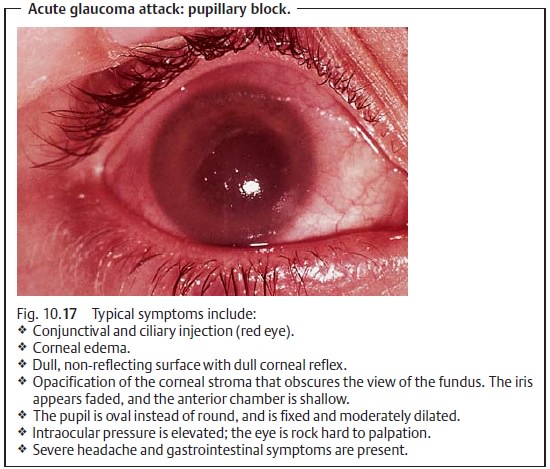 ❖  The cornea is dull and steamy with epithelial edema.

❖The fundus is generally obscured due to opacification of the corneal epithelium. When the fundus can be visualized as symptoms subside and the cornea clears, the spectrum of changes to the optic disk will range from a normal vital optic disk to an ill-defined hyperemic optic nerve. In the lat-ter case, venous congestion will be present. The central artery of the retina will be seen to pulse on the optic disk as blood can only enter the eye during the systolic phase due to the high intraocular pressure.

❖  Visual acuity is reduced to perception of hand motions.

Misdiagnosis is possible as the wide variety of symp-toms can simulate other disorders.

❖ General symptoms such as headache, vomiting, and nausea often predom-inate and can easily be mistaken for appendicitis or a brain tumor.

❖In iritis and iridocyclitis, the eye is also red and the iris appears faded.However, intraocular pressure tends to be decreased rather than elevated.

An acute glaucoma attack is an emergency, and the patient requires immediate treatment by an ophthalmologist. The underlying causes of the disorder require surgical treatment, although initial therapy is con-servative.

❖ Allow the cornea to clear (important for subsequent surgery). 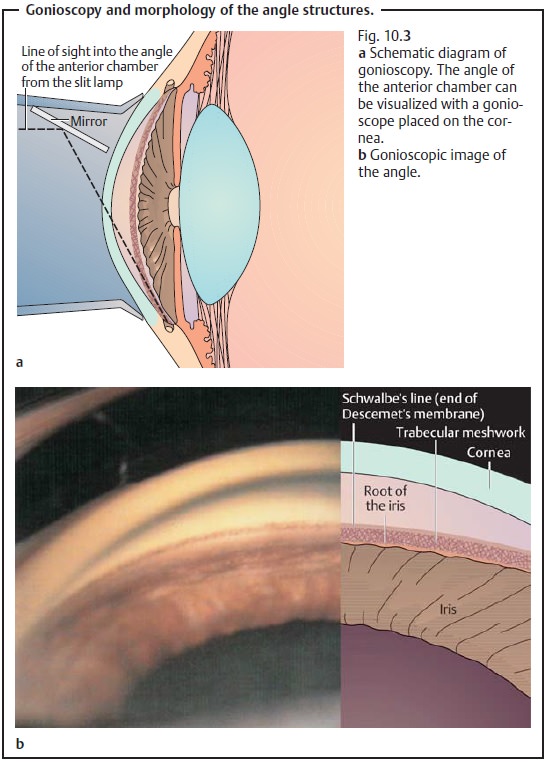 ❖ Production of aqueous humor is decreased by inhibiting carbonic anhy-drase (intravenous acetazolamide, 250 – 500 mg). Both steps are taken ini-tially to reduce intraocular pressure to below 50 – 60 mm Hg.

❖The iris is withdrawn from the angle of the anterior chamber by adminis-tering topical miotic agents. Pilocarpine 1% eyedrops should be applied every 15 minutes. If this is not effective, pilocarpine can be applied more often, every five minutes, and in concentrations up to 4%. Miotic agents are not the medications of first choice because the sphincter pupillae muscle is ischemic at pressures exceeding 40 – 50 mm Hg and will not respond to miotic agents. Miotic agents also relax the zonule fibers, which causes anterior displacement of the lens that further compresses the anterior chamber. This makes it important to first initiate therapy with hyper-osmotic agents to reduce the volume of the vitreous body.

❖ Symptomatic therapy with analgesic agents, antiemetic agents, and seda-tives may be initiated where necessary.

Mechanical indentation of the cornea: Simple repetitive indentation of thecentral cornea with a muscle hook or glass rod for approximately 15 – 30 sec-onds presses the aqueous humor into the periphery of the angle of the ante-rior chamber, which opens the angle. If this manipulation succeeds in keep-ing the trabecular meshwork open for a few minutes, it will permit aqueous humor to drain and reduce intraocular pressure. This improves the response to pilocarpine and helps clear up the cornea.

Neodymium:yttrium-aluminum-garnet laser iridotomy (nonincisional pro-cedure): The Nd:YAG laser can be used to create an opening in the peripheraliris (iridotomy) by tissue lysis without having to open the globe (Figs. 10.18a – c). The operation can be performed under topical anesthesia (Fig. 10.19). 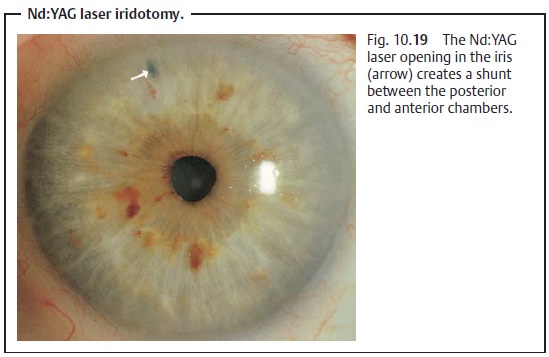 When the patient reports clear prodromal symptoms and theangle of the anterior chamber appears constricted, the safest prophylaxis is to perform a Nd:YAG laser iridotomy or peripheral iridectomy. If one eye has already suffered an acute attack, the fellow eye should be treated initially every 4 – 6 hours with pilocarpine 1% to minimize the risk of a glaucoma attack. The second eye should then be treated with a Nd:YAG laser to prevent glaucoma once surgical stabilization of the first eye has been achieved.

One can usually readily release a pupillary block and lowerintraocular pressure in an initial attack with medication and permanently prevent further attacks with surgery. However, recurrent acute angle closure glaucoma or angle closure persisting longer than 48 hours can produce peripheral synechia between the root of the iris and the trabecular meshwork opposite it. These persisting cases of angle closure glaucoma cannot be cured by Nd:YAG laser iridotomy or iridectomy, and the angle closure will persist despite surgery. Filtration surgery is indicated in these cases.

Where intraocular pressure is controlled and the cornea is clear, gonios-copy is indicated to demonstrate that the angle is open again and to exclude persistent angle closure.