These glaucomas are caused by other ocular diseases of factors such as inflam-mation, trauma, bleeding, tumors, medication, and physical or chemical influences.

These glaucomas are caused by other ocular diseases of factors such as inflam-mation, trauma, bleeding, tumors, medication, and physical or chemical influences (see Table 10.1). 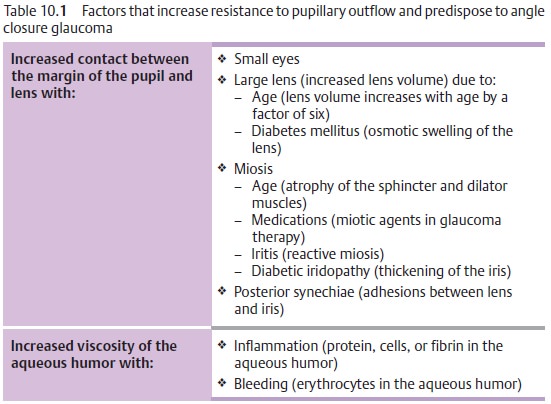 The most important forms:

Pigmentary glaucoma.Young myopic men typically are affected. The dis-order is characterized by release of pigment granules from the pigmentary epithelium of the iris that congest the trabecular meshwork.

Cortisone glaucoma.Thirty-five to forty per cent of the population react tothree-week topical or systemic steroid therapy with elevated intraocular pressure. Increased deposits of mucopolysaccharides in the trabecular mesh-work presumably increase resistance to outflow; this is reversible when the steroids are discontinued.

1.        The viscosity of the aqueous humor increases as a result of the influx of pro-tein from inflamed iris vessels.

Phacolytic glaucoma.This is acute glaucoma in eyes with mature or hyper-mature cataracts. Denatured lens protein passes through the intact lens cap-sule into the anterior chamber and is phagocytized. The trabecular meshwork becomes congested with protein-binding macrophages and the protein itself.

The most important causes:

Rubeosis iridis.Neovascularization draws theangle of the anterior chamber together like a zipper (neovascular glaucoma).

Ischemic retinal disorders such as diabetic retinopathy and retinal vein occlu-sion can lead to rubeosis iridis with progressive closure of the angle of theanterior chamber. Other forms of retinopathy or intraocular tumors can also cause rubeosis iridis. The prognosis for eyes with neovascular glaucoma is poor (see Fig. 10.20a and b). 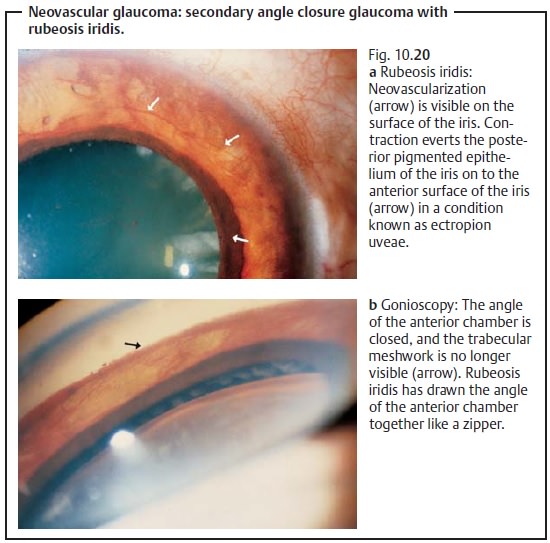 Trauma.Post-traumatic presence of blood or exudate in the angle of the ante-rior chamber and prolonged contact between the iris and trabecular mesh-work in a collapsed anterior chamber (following injury, surgery, or insuffi-cient treatment of primary angle closure) can lead to anterior synechiae and angle closure without rubeosis iridis.

Secondary glaucomas may be caused by many different factors, and the angle may be open or closed. Therefore, treatment will depend on the etiology of the glaucoma. The underlying disorder is best treated first. Glaucomas with uveitis (such as iritis or iridocyclitis) initially are treated conservatively with anti-inflammatory and antiglaucoma agents. Surgery is indicated where con-servative treatment is not sufficient.