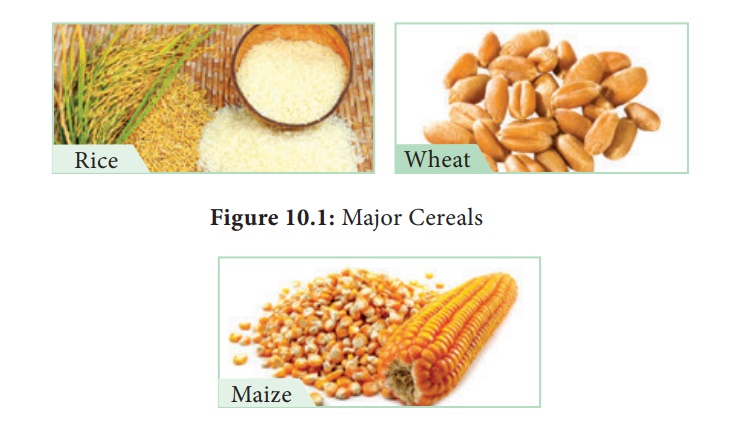 The nutrients provided by cereals include carbohydrates, proteins, fibres and a wide range of vitamins and minerals.

Currently about 10,000 food plants are being used of which only around 1,500 species were brought under cultivation. However, food base of majority of the population depends only on three grass species namely rice, wheat and maize.

The word cereal is derived from Ceres, which according to the Roman mythology denotes “Goddess of agriculture”. All cereals are members of grass family (Poaceae) that are grown for their edible starchy seeds. The prominence of cereals as food plants is due to the following attributes:

i. Greater adaptability and successful colonisation on every type of habitat.

ii. The relative ease of cultivation

iv. Compact and dry grains that they can be easily handled, transported and stored without undergoing spoilage.

The nutrients provided by cereals include carbohydrates, proteins, fibres and a wide range of vitamins and minerals. Cereals can be classified into two different types based on their size namely Major Cereals and Minor Cereals. 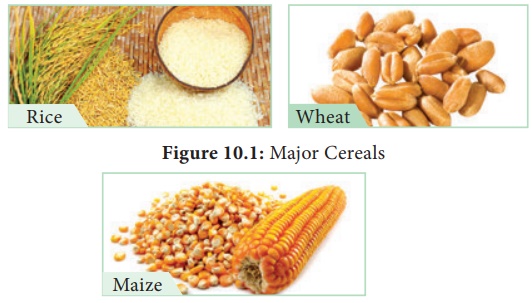 Paddy is a semi -aquatic crop and is grown in standing water. It is an important food crop of the world, occupying the second position in terms of area under cultivation and production, next to wheat. Rice is the chief source of carbohydrate.

South East Asia is considered as the center of origin of rice. Earliest evidences of rice cultivation have been found in China, India and Thailand. It is mainly cultivated in Delta and irrigated regions of Tamil Nadu.

Rice is the easily digestible calorie rich cereal food which is used as a staple food in Southern and North East India. Various rice products such as Flaked rice (Aval), Puffed rice / parched rice (Pori) are used as breakfast cereal or as snack food in different parts of India.

Rice bran oil obtained from the rice bran is used in culinary and industrial purposes. Husks are used as fuel, and in the manufacture of packing material and fertilizer.

Wheat is the staple food in Northern India. Wheat flour is suitable to make bread and other bakery products. Processed wheat flour, that has little fibre, is called Maida which is used extensively in making parota, naan and bakery products. Malted wheat is a major raw material for producing alcoholic beverages and nutritive drinks.

Origin and Area of Cultivation

Maize is the only cereal that has originated and domesticated from the New World. Madhya Pradesh, Himachal Pradesh and Punjab are the major maize producing states of India.

Whereas Perambalur, Ariyalur, Cuddalore, Dindigul and Tirupur are the major maize growing belts in Tamil Nadu.

Most of the corn produced is used as fodder than food. Corn syrup is used in the manufacture of infant foods. Corn is a raw material in the industrial production of alcohol and alcoholic beverages.