The central tegmental tract is the most important efferent pathway of the extrapy-ramidal motor system.

The central tegmental tract is the most important efferent pathway of the extrapy-ramidal motor system. It runs from the midbrain to the lower portion of the olive (A1) where the majority of its fibers terminate. The remaining fibers are thought to continue into the spinal cord via short neurons that synapse in series (reticuloretic-ular fibers) (A2). In the caudal midbrain, thetract lies dorsolaterally from the decussa-tion of the superior cerebellar peduncles; it forms a large, not clearly demarcated fiber plate in the pons. 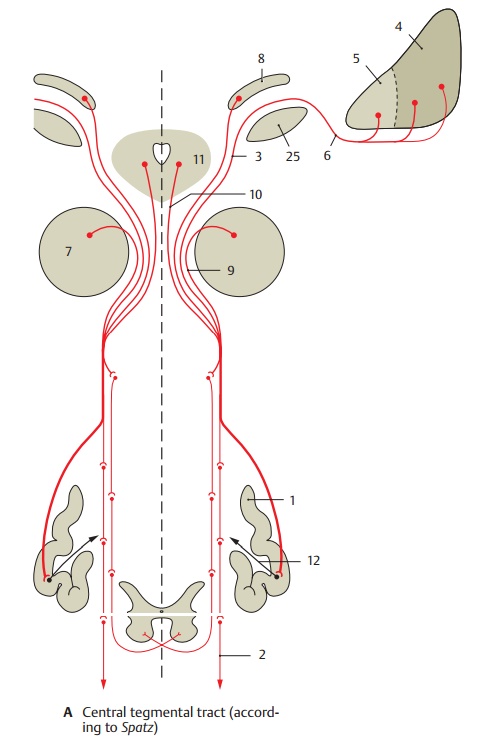 The tract consists of three components:

·           The pallido-olivary fibers (A3) from the stri-atum (A4) and the pallidum (A5), whichextend in the pallidotegmental bundle (A6) to the capsule of the red nucleus (A7) and further to the olive. Fibers from the zona incerta (A8) join them.

·           The reticulo-olivary fibers (A10) join the tegmental tract from various levels, namely, from the red nucleus, the central gray of the aqueduct (A11), and the retic-ular formation of pons and medulla ob-longata.

Impulses received by the olive from the ex-trapyramidal motor centers, and probably also from the motor cortex, are relayed to the cerebellar cortex via the olivocerebellarfibers (A12).