Chapter: Distributed and Cloud Computing: From Parallel Processing to the Internet of Things : Computer Clusters for Scalable Parallel Computing

This section reviews three top supercomputers that have been singled out as winners in the Top 500 List for the years 2008–2010. The IBM Roadrunner was the world’s first petaflops computer, ranked No. 1 in 2008. Subsequently, the Cray XT5 Jaguar became the top system in 2009. In November 2010, Chi-na’s Tianhe-1A became the fastest system in the world. All three systems are Linux cluster-structured with massive parallelism in term of large number of compute nodes that can execute concurrently.

In November 2010, the Tianhe-1A was unveiled as a hybrid supercomputer at the 2010 ACM Supercom-puting Conference. This system demonstrated a sustained speed of 2.507 Pflops in Linpack Benchmark testing runs and thus became the No. 1 supercomputer in the 2010 Top 500 list. The system was built by the National University of Defense Technology (NUDT) and was installed in August 2010 at the National Supercomputer Center (NSC), Tianjin, in northern China (www.nscc.tj.gov.cn). The system is intended as an open platform for research and education. Figure 2.24 shows the Tianh-1A system installed at NSC.

Figure 2.25 shows the abstract architecture of the Tianhe-1A system. The system consists of five major components. The compute subsystem houses all the CPUs and GPUs on 7,168 compute nodes. The service subsystem comprises eight operation nodes. The storage subsystem has a large number of shared disks. The monitoring and diagnosis subsystem is used for control and I/O operations. The communication subsystem is composed of switches for connecting to all functional subsystems. 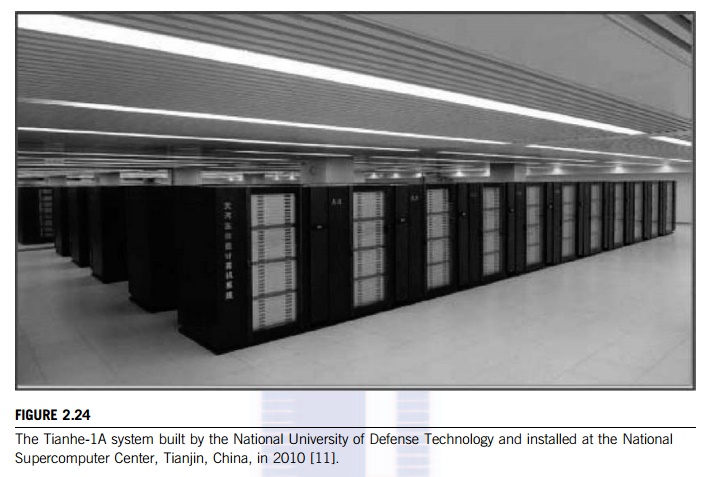 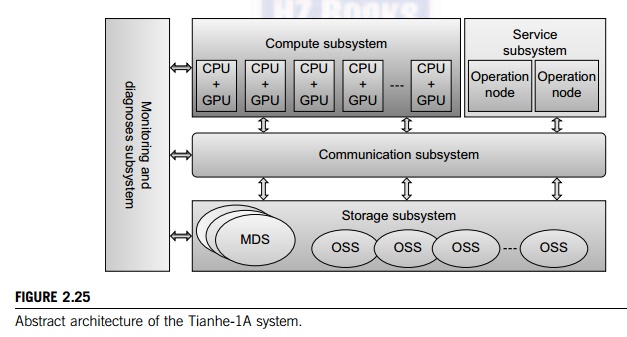 connected via PCI-E. A blade has two nodes and is 2U in height (Figure 2.25). The complete sys-tem has 14,336 Intel sockets (Westmere) plus 7,168 NVIDIA Fermi boards plus 2,048 Galaxy sock-ets (the Galaxy processor-based nodes are used as frontend processing for the system). A compute node has two Intel sockets plus a Fermi board plus 32 GB of memory.

The total system has a theoretical peak of 4.7 Pflops/second as calculated in Figure 2.26. Note that there are 448 CUDA cores in each GPU node. The peak speed is achieved through 14,236 Xeon CPUs (with 380,064 cores) and 7,168 Tesla GPUs (with 448 CUDA cores per node and 3,496,884 CUDA cores in total). There are 3,876,948 processing cores in both the CPU and GPU chips. An operational node has two eight-core Galaxy chips (1 GHz, SPARC architecture) plus 32 GB of memory. The Tianhe-1A system is packaged in 112 compute cabinets, 12 storage cabinets, six communications cabinets, and eight I/O cabinets.

The operation nodes are composed of two eight-core Galaxy FT-1000 chips. These processors were designed by NUDT and run at 1 GHz. The theoretical peak for the eight-core chip is 8 Gflops/second. The complete system has 1,024 of these operational nodes with each having 32 GB of memory. These operational nodes are intended to function as service nodes for job crea-tion and submission. They are not intended as general-purpose computational nodes. Their speed is excluded from the calculation of the peak or sustained speed. The peak speed of the Tianhe-1A is calculated as 3.692 Pflops [11]. It uses 7,168 compute nodes (with 448 CUDA cores/GPU/compute node) in parallel with 14,236 CPUs with six cores in four subsystems.

The system has total disk storage of 2 petabytes implemented with a Lustre clustered file sys-tem. There are 262 terabytes of main memory distributed in the cluster system. The Tianhe-1A epi-tomizes modern heterogeneous CPU/GPU computing, enabling significant achievements in performance, size, and power. The system would require more than 50,000 CPUs and twice as much floor space to deliver the same performance using CPUs alone. A 2.507-petaflop system built entirely with CPUs would consume at least 12 megawatts, which is three times more power than what the Tianhe-1A consumes.

The high performance of the Tianhe-1A is attributed to a customed-designed ARCH interconnect by the NUDT builder. This ARCH is built with the InfiniBand DDR 4X and 98 TB of memory. It assumes a fat-tree architecture as shown in Figure 2.27. The bidirectional bandwidth is 160 Gbps, about twice the bandwidth of the QDR InfiniBand network over the same number of nodes. The ARCH has a latency for a node hop of 1.57 microseconds, and an aggregated bandwidth of 61 Tb/ second. At the first stage of the ARCH fat tree, 16 nodes are connected by a 16-port switching board. At the second stage, all parts are connects to eleven 384-port switches. The router and net-work interface chips are designed by the NUDT team. 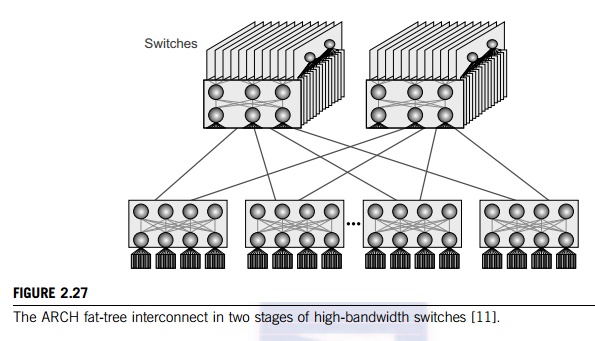 The software stack on the Tianhe-1A is typical of any high-performance system. It uses Kylin Linux, an operating system developed by NUDT and successfully approved by China’s 863 Hi-tech Research and Development Program office in 2006. Kylin is based on Mach and FreeBSD, is compatible with other mainstream operating systems, and supports multiple microprocessors and computers of different struc-tures. Kylin packages include standard open source and public packages, which have been brought onto one system for easy installation. Figure 2.28 depicts the Tianhe-1A software architecture.

The system features FORTRAN, C, C++, and Java compilers from Intel (icc 11.1), CUDA, OpenMP, and MPI based on MPICH2 with custom GLEX (Galaxy Express) Channel support. The NUDT builder developed a mathematics library, which is based on Intel’s MKL 10.3.1.048 and BLAS for the GPU based on NVIDIA and optimized by NUDT. In addition, a High Productive Parallel Running Environ-ment (HPPRE) was installed. This provides a parallel toolkit based on Eclipse, which is intended to inte-grate all the tools for editing, debugging, and performance analysis. In addition, the designers provide workflow support for Quality of Service (QoS) negotiations and resource reservations.

The power consumption of the Tianhe-1A under load is 4.04 MWatt. The system has a footprint of 700 square meters and is cooled by a closed-coupled chilled water-cooling system with forced air. The hybrid architecture consumes less power—about one-third of the 12 MW that is needed to run the system entirely with the multicore CPUs. The budget for the system is 600 million RMB (approximately $90 million); 200 million RMB comes from the Ministry of Science and Technol-ogy (MOST) and 400 million RMB is from the Tianjin local government. It takes about $20 million annually to run, maintain, and keep the system cool in normal operations. 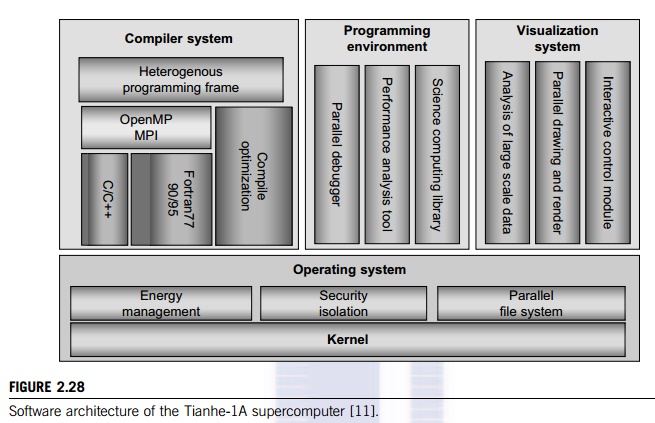 The system has an efficiency of 54.58 percent, which is much lower than the 75 percent efficiency achieved by Jaguar and Roadrunner. Listed below are some applications of Tianhe-1A. Most of them are specially tailored to satisfy China’s national needs.

The Cray XT5 Jaguar was ranked the world’s fastest supercomputer in the Top 500 list released at the ACM Supercomputing Conference in June 2010. This system became the second fastest super-computer in the Top 500 list released in November 2010, when China’s Tianhe-1A replaced the Jaguar as the No. 1 machine. This is a scalable MPP system built by Cray, Inc. The Jaguar belongs to Cray’s system model XT5-HE. The system is installed at the Oak Ridge National Laboratory, 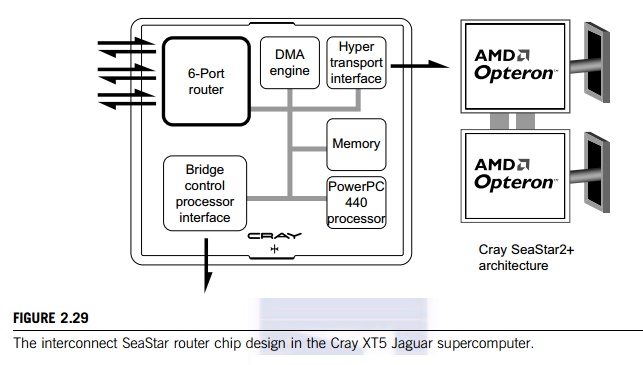 Department of Energy, in the United States. The entire Jaguar system is built with 86 cabinets. The following are some interesting architectural and operational features of the Jaguar system:

•    Attained a sustained speed, Rmax, from the Linpack Benchmark test of 1.759 Pflops

The basic building blocks are the compute blades. The interconnect router in the SeaStar+ chip (Figure 2.29) provides six high-speed links to six neighbors in the 3D torus, as seen in Figure 2.30. The system is scalable by design from small to large configurations. The entire system has 129 TB of compute memory. In theory, the system was designed with a peak speed of Rpeak = 2.331 Pflops. In other words, only 75 percent (=1.759/2.331) efficiency was achieved in Linpack experiments. The external I/O interface uses 10 Gbps Ethernet and InfiniBand links. MPI 2.1 was applied in mes-sage-passing programming. The system consumes 32–43 KW per cabinet. With 160 cabinets, the entire system consumes up to 6.950 MW. The system is cooled with forced cool air, which con-sumes a lot of electricity. 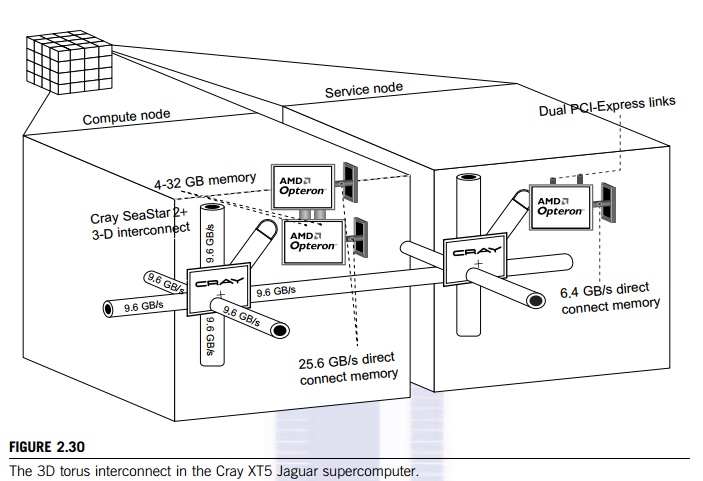 links which connect to six neighbors in the 3D torus. The peak bidirectional bandwidth of each link is 9.6 GB/second with sustained bandwidth in excess of 6 GB/second. Each port is configured with an independent router table, ensuring contention-free access for packets.

The router is designed with a reliable link-level protocol with error correction and retransmission, ensuring that message-passing traffic reliably reaches its destination without the costly timeout and retry mechanism used in typical clusters. The torus interconnect directly connects all the nodes in the Cray XT5 system, eliminating the cost and complexity of external switches and allowing for easy expandability. This allows systems to economically scale to tens of thousands of nodes— well beyond the capacity of fat-tree switches. The interconnect carries all message-passing and I/O traffic to the global file system.

The Cray XT5 family employs an energy-efficient packaging technology, which reduces power use and thus lowers maintenance costs. The system’s compute blades are packaged with only the necessary components for building an MPP with processors, memory, and interconnect. In a Cray XT5 cabinet, vertical cooling takes cold air straight from its source—the floor—and efficiently cools the processors on the blades, which are uniquely positioned for optimal airflow. Each processor also has a custom-designed heat sink depending on its position within the cabinet. Each Cray XT5 sys-tem cabinet is cooled with a single, high-efficiency ducted turbine fan. It takes 400/480VAC directly from the power grid without transformer and PDU loss.

The Cray XT5 3D torus architecture is designed for superior MPI performance in HPC applica-tions. This is accomplished by incorporating dedicated compute nodes and service nodes. Compute nodes are designed to run MPI tasks efficiently and reliably to completion. Each compute node is composed of one or two AMD Opteron microprocessors (dual or quad core) and direct attached memory, coupled with a dedicated communications resource. Service nodes are designed to provide system and I/O connectivity and also serve as login nodes from which jobs are compiled and launched. The I/O bandwidth of each compute node is designed for 25.6 GB/second performance.

3. IBM Roadrunner: The Top Supercomputer in 2008

In 2008, the IBM Roadrunner was the first general-purpose computer system in the world to reach petaflops performance. The system has a Linpack performance of 1.456 Pflops and is installed at the Los Alamos National Laboratory (LANL) in New Mexico. Subsequently, Cray’s Jaguar topped the Roadrunner in late 2009. The system was used mainly to assess the decay of the U.S. nuclear arsenal. The system has a hybrid design with 12,960 IBM 3.2 GHz PowerXcell 8i CPUs (Figure 2.31) and 6,480 AMD 1.8 GHz Opteron 2210 dual-core processors. In total, the system has 122,400 cores. Roadrunner is an Opteron cluster accelerated by IBM Cell processors with eight floating-point cores.

The Cell/B.E. processors provide extraordinary compute power that can be harnessed from a single multicore chip. As shown in Figure 2.31, the Cell/B.E. architecture supports a very broad range of applications. The first implementation is a single-chip multiprocessor with nine processor elements 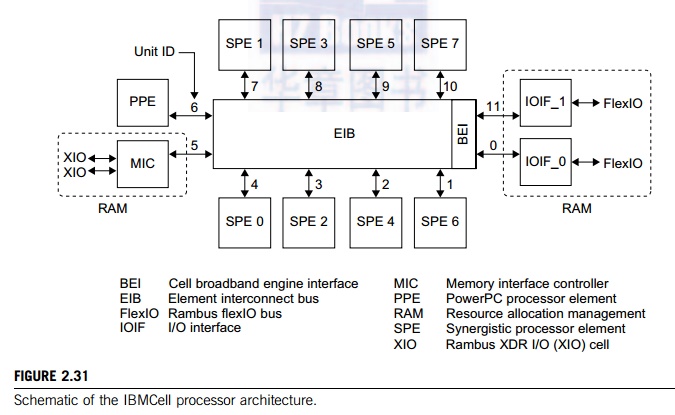 operating on a shared memory model. The rack is built with TriBlade servers, which are connected by an InfiniBand network. In order to sustain this compute power, the connectivity within each node con-sists of four PCI Express x8 links, each capable of 2 GB/s transfer rates, with a 2 μs latency. The expansion slot also contains the InfiniBand interconnect, which allows communications to the rest of the cluster. The capability of the InfiniBand interconnect is rated at 2 GB/s with a 2 μs latency.

The Roadrunner cluster was constructed hierarchically. The InfiniBand switches cluster together 18 connected units in 270 racks. In total, the cluster connects 12,960 IBM Power XCell 8i processors and 6,480 Opteron 2210 processors together with a total of 103.6 TB of RAM. This cluster com-plex delivers approximately 1.3 Pflops. In addition, the system’s 18 Com/Service nodes deliver 4.5 Tflops using 18 InfiniBand switches. The second storage units are connected with eight InfiniBand switches. In total, 296 racks are installed in the system. The tiered architecture is constructed in two levels. The system consumes 2.35 MW power, and was the fourth most energy-efficient supercom-puter built in 2009.