Endocardial isolation involves making an incision into the endo-cardium that separates the area where the dysrhythmia originates from the surrounding endocardium. The edges of the incision are then sutured together. The incision and its resulting scar tissue prevent the dysrhythmia from affecting the whole heart.

In endocardial resection, the origin of the dysrhythmia is identi-fied, and that area of the endocardium is peeled away. No recon-struction or repair is necessary.

Catheter ablation destroys specific cells that are the cause or cen-tral conduction method of a tachydysrhythmia. It is performed with or after an EP study. Usual indications for ablation are AV nodal reentry tachycardia, atrial fibrillation, or VT unresponsive to previous therapy (or for which the therapy produced signifi-cant side effects).

Ablation is also indicated to eliminate accessory AV pathways or bypass tracts that exist in the hearts of patients with preexcita-tion syndromes such as Wolff-Parkinson-White (WPW) syn-drome. During normal embryonic development, all connections between the atrium and ventricles disappear, except for that be-tween the AV node and the bundle of His. In some people, em-bryonic connections of normal heart muscle between the atrium and ventricles remain, providing an accessory pathway or a tract through which the electrical impulse can bypass the AV node. These pathways can be located in several different areas. If the pa-tient develops atrial fibrillation, the impulse may be conducted into the ventricle at a rate of 300 times per minute or more, which can lead to ventricular fibrillation and sudden cardiac death. Pre-excitation syndromes are identified by specific ECG findings. For example, in WPW syndrome there is a shortened PR interval, slurring (called a delta wave) of the initial QRS deflection, and prolonged QRS duration (Fig. 27-33). 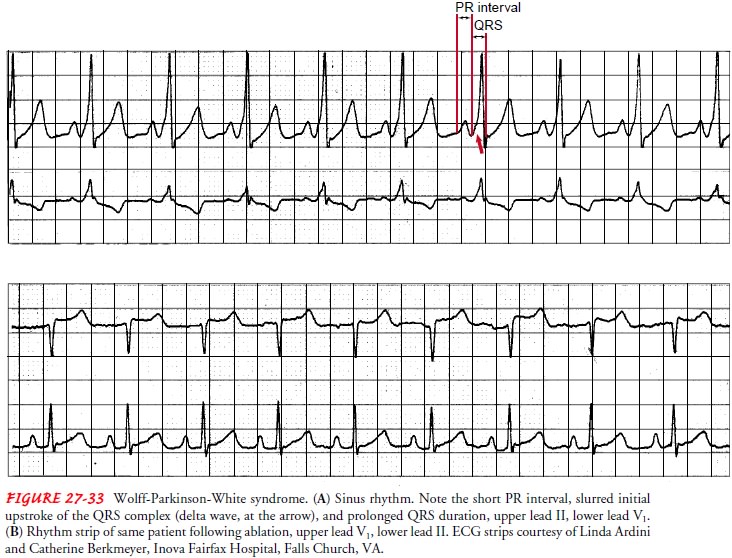 Ablation may be accomplished by three different methods: radiofrequency ablation, cryoablation, or electrical ablation. The most often used method is radiofrequency, which involves plac-ing a special catheter at or near the origin of the dysrhythmia. High-frequency, low-energy sound waves are passed through the catheter, causing thermal injury and cellular changes that result in localized destruction and scarring. The tissue damage is more specific to the dysrhythmic tissue, with less trauma to the sur-rounding cardiac tissue than occurs with cryoablation or electri-cal ablation.

Cryoablation involves placing a special probe, cooled to a tem-perature of −60°C (−76°F), on the endocardium at the site of the dysrhythmia’s origin for 2 minutes. The tissue freezes and is later replaced by scar tissue, eliminating the origin of the dysrhythmia.

In electrical ablation, a catheter is placed at or near the origin of the dysrhythmia, and one to four shocks of 100 to 300 joules are administered through the catheter directly to the endocardium and surrounding tissue. The cardiac tissue burns and scars, thus eliminating the source of the dysrhythmia.

Postprocedural care is similar to that for an EP study, except that the patient is monitored more closely, depending on the time needed for recovery from sedation.