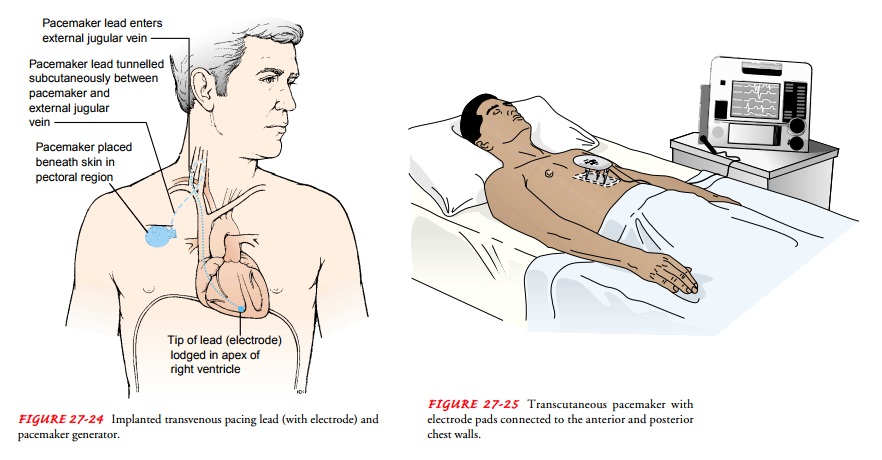 A pacemaker is an electronic device that provides electrical stimuli to the heart muscle.

A pacemaker is an electronic device that provides electrical stimuli to the heart muscle. Pacemakers are usually used when a patient has a slower-than-normal impulse formation or a conduction dis-turbance that causes symptoms. They may also be used to control some tachydysrhythmias that do not respond to medication ther-apy. Biventricular (both ventricles) pacing may be used to treat ad-vanced heart failure that does not respond to medication therapy.

Pacemakers consist of two components: an electronic pulse gen-erator and pacemaker electrodes, which are located on leads or wires. The generator contains the circuitry and batteries that gen-erate the rate (measured in beats per minute) and the strength (measured in milliamperes [mA]) of the electrical stimulus deliv-ered to the heart. The pacemaker electrodes convey the heart’s elec-trical activity through a lead to the generator; the generator’s electrical response to the information received is then transmit-ted to the heart.

Leads can be threaded through a major vein into the right ven-tricle (endocardial leads), or they can be lightly sutured onto the outside of the heart and brought through the chest wall during open heart surgery (epicardial wires). The epicardial wires are al-ways temporary and are removed by a gentle tug within a few days after surgery. The endocardial leads may be temporarily placed with catheters through the femoral, antecubital, brachial, or jugu-lar vein (transvenous wires), usually guided by fluoroscopy. The endocardial and epicardial wires are connected to a temporary generator, which is about the size of a small paperback book. The energy source for a temporary generator is a common household battery; monitoring for pacemaker malfunctioning and battery failure is a nursing responsibility. This type of pacemaker therapy necessitates hospitalization of the patient.

The endocardial leads also may be placed permanently, usu-ally through the external jugular vein, and connected to a per-manent generator, which is usually implanted underneath the skin in a subcutaneous pocket in the pectoral region or below the clavicle (Fig. 27-24). Sometimes an abdominal site is selected. This procedure is usually performed in a cardiac catheterization laboratory with the patient receiving a local anesthetic. Perma-nent pacemaker generators are insulated to protect against body moisture and warmth. There are several different energy sources for permanent generators: mercury-zinc batteries (which last 3 to 4 years), lithium cell units (up to 10 years), and nuclear-powered sources such as plutonium 238 (up to 20 years). Some of the bat-teries are rechargeable. If the battery is not rechargeable and fail-ure is impending, the old generator is removed and the new one is connected to the existing leads and reimplanted in the already existing subcutaneous pocket. This procedure is usually performed with the patient receiving a local anesthetic. Hospitalization of the patient is needed for implantation or battery replacement. 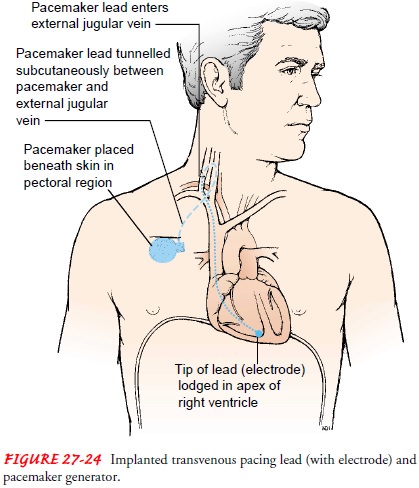 If a patient suddenly develops a bradycardia, emergency pac-ing may be started with transcutaneous pacing, which most de-fibrillators are now equipped to perform. AEDs are not able to do transcutaneous pacing (see later discussion). Large pacing ECG electrodes (sometimes the same conductive pads that are used for cardioversion and defibrillation) are placed on the patient’s chest and back. 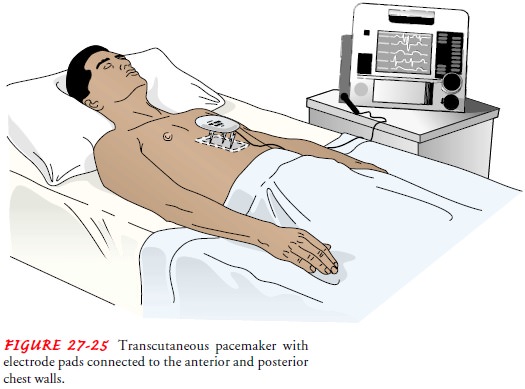 The electrodes are connected to the defibrillator, which is the temporary pacemaker generator (Fig. 27-25). Because the impulse must travel through the patient’s skin and tissue before reaching the heart, transcutaneous pacing can cause significant dis-comfort and is intended to be used only in emergencies. This type of pacing necessitates hospitalization. If the patient is alert, the use of sedation and analgesia should be discussed with the physician.

Because of the sophistication and wide use of pacemakers, a uni-versal code has been adopted to provide a means of safe commu-nication about their function. The coding is referred to as the NASPE-BPEG code because it is sanctioned by the North Amer-ican Society of Pacing and Electrophysiology and the British Pac-ing and Electrophysiology Group. The complete code consists of five letters, but only the first three are commonly used.

The first letter of the code identifies the chamber or chambers being paced—that is, the chamber containing a pacing electrode. The letter characters for this code are A (atrium), V (ventricle), or D (dual, meaning both A and V).

The second letter describes the chamber or chambers being sensed by the pacemaker generator. Information from the elec-trode within the chamber is sent to the generator for interpreta-tion and action by the generator. The possible letter characters are A (atrium), V (ventricle), D (dual), and O (indicating that the sensing function is turned off).

The fourth and fifth letters are used only with permanent pace-maker generators. The fourth letter of the code is related to a per-manent generator’s ability to be programmed or reset. The possible letters are O (none), P (simple programmability), M (multi-programmability; ability to change at least three factors, such as the rate at which pacing is initiated, the rate of pacing, and the amount of energy delivered), C (communicative or telemetry ability; information about the generator may be obtained [read or interrogated] with a hand-held device placed above the chest), and R (rate responsive capabilities; the ability of the pacemaker to change the rate from moment to moment based on parameters such as physical activity, acid-base changes, temperature, rate and depth of respirations, and oxygen saturation). A pacemaker with rate responsive ability will be capable of improving cardiac output during times of increased cardiac demand, such as with exercise.

An example of a NASPE-BPEG code is DVI:

D:Both the atrium and the ventricle have a pacing electrode in place.

V:The pacemaker is sensing the activity of the ventricle only.

I:The pacemaker’s stimulating effect is inhibited by ventric-ular activity—in other words, it does not create an impulse when the patient’s ventricle is active. The pacemaker paces the atrium and then the ventricle when no ventricular ac-tivity is sensed for a period of time (the time is individually programmed into the pacemaker for each patient).

The type of generator and its selected settings depend on the patient’s dysrhythmia, underlying cardiac function, and age. A straight vertical line usually can be seen on the ECG when pac-ing is initiated. The line that represents pacing is called a pacemaker spike. The appropriate ECG complex should immediately follow the pacing spike; therefore, a P wave should follow an atrial pacing spike and a QRS complex should follow a ventricular pac-ing spike. Because the impulse starts in a different place than the patient’s normal rhythm, the QRS complex or P wave that re-sponds to pacing looks different from the patient’s normal ECG complex. Capture is a term used to denote that the appropriate complex followed the pacing spike.

Pacemakers are generally set to sense and respond to intrinsic activity, which is called on-demand pacing (Fig. 27-26). If the pacemaker is set to pace but not to sense, it is called a fixed or asynchronous pacemaker (Fig. 27-27); this is written in code as AOO or VOO. The pacemaker will pace at a constant rate, inde-pendent of the patient’s intrinsic rhythm. Because AOO pacing stimulates only the atrium, it may be used in a patient who has undergone open heart surgery and develops sinus bradycardia. AOO pacing ensures synchrony between atrial stimulation and ventricular stimulation (and therefore contraction), as long as the patient has no conduction disturbances in the AV node. VOO is rare because of the risk that the pacemaker may deliver an impulse during the vulnerable repolarization phase, leading to VT.

Complications of Pacemaker Use

Complications associated with pacemakers relate to their pres-ence within the body, and improper functioning. The following complications may arise from a pacemaker:

·      Local infection at the entry site of the leads for temporary pacing, or at the subcutaneous site for permanent generator placement

·      Bleeding and hematoma at the lead entry sites for tem-porary pacing, or at the subcutaneous site for permanent generator placement

·      Phrenic nerve, diaphragmatic (hiccuping may be a sign of this), or skeletal muscle stimulation if the lead is dislocated or if the delivered energy (mA) is set high

In the initial hours after a temporary or permanent pacemaker is inserted, the most common complication is dislodgment of the pacing electrode. Minimizing patient activity can help to prevent this complication. If a temporary electrode is in place, the ex-tremity through which the catheter has been advanced is immo-bilized. With a permanent pacemaker, the patient is instructed initially to restrict activity on the side of the implantation.

The ECG is monitored very carefully to detect pacemaker mal-function. Improper pacemaker function, which can arise from failure in one or more components of the pacing system, is out-lined in Table 27-2. The following data should be noted on the patient’s record: model of pacemaker, type of generator, date and time of insertion, location of pulse generator, stimulation thresh-old, pacer settings (eg, rate, energy output [mA], and duration between atrial and ventricular impulses [AV delay]). This infor-mation is important for identifying normal pacemaker function and diagnosing pacemaker malfunction. 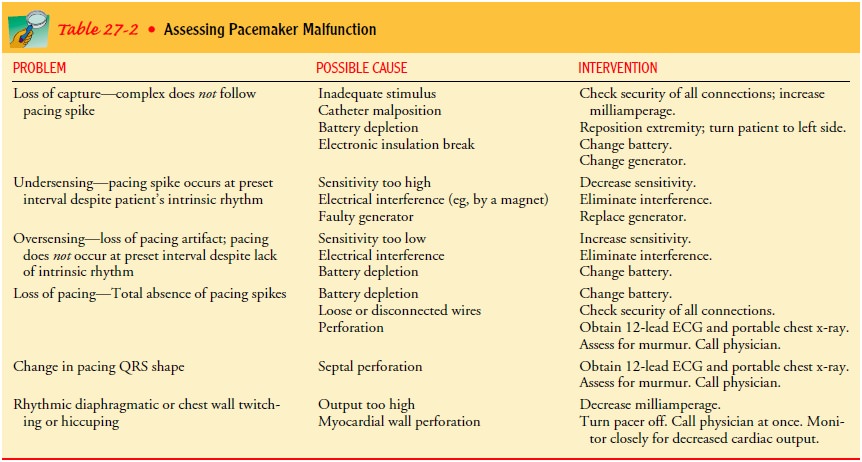 A patient experiencing pacemaker malfunction may develop signs and symptoms of decreased cardiac output. The degree to which these symptoms become apparent depends on the severity of the malfunction, the patient’s level of dependency on the pace-maker, and the patient’s underlying condition. Pacemaker mal-function is diagnosed by analyzing the ECG. Manipulating the electrodes, changing the generator’s settings, or replacing the pace-maker generator or leads (or both) may be necessary.

Inhibition of permanent pacemakers can occur with exposure to strong electromagnetic fields (electromagnetic interference). However, recent pacemaker technology allows patients to safely use most household electronic appliances and devices (eg, microwave ovens, electric tools) as long as they are not held close to the pace-maker generator. Gas-powered engines should be turned off before working on them. Objects that contain magnets (eg, the earpiece of a standard phone; large stereo speakers; magnet therapy prod-ucts such as mattresses, jewelry, and wraps) should not be near the generator for longer than a few seconds. Patients are advised to use digital cellular phones on the side opposite the pacemaker gen-erator. Large electromagnetic fields, such as those produced by magnetic resonance imaging (MRI), radio and TV transmitter tow-ers and lines, transmission power lines (these are different from the distribution lines that bring electricity into a home), and electrical substations may cause electromagnetic interference. Patients should be cautioned to avoid such situations or to simply move farther away from the area if they experience dizziness or a feeling of rapid or irregular heartbeats (palpitations). Welding and use of a chain saw should be avoided. If such tools are used, precautionary steps such as limiting the welding current to a 60- to 130-ampere range or using electric rather than gasoline-powered chain saws are advised.

Pacemaker clinics have been established to monitor patients and to test pulse generators for impending pacemaker battery failure. Several other factors, such as lead fracture, muscle inhibition, and insulation disruption, are assessed depending on the type of pace-maker and the equipment available. If indicated, the pacemaker is turned off for a few seconds, using a magnet or a programmer, while the ECG is recorded to assess the patient’s underlying car-diac rhythm.

Another follow-up method is transtelephonic transmission of the generator’s pulse rate. Special equipment is used to transmit information about the patient’s pacemaker over the telephone to a receiving system at a pacemaker clinic. The information is con-verted into tones, which equipment at the clinic converts to an electronic signal and records on an ECG strip. The pacemaker rate and other data concerning pacemaker function are obtained and evaluated by a cardiologist. This simplifies the diagnosis of a failing generator, reassures the patient, and improves manage-ment when the patient is physically remote from pacemaker testing facilities.