Cardiac arrest occurs when the heart ceases to produce an effec-tive pulse and blood circulation.

Cardiac arrest occurs when the heart ceases to produce an effec-tive pulse and blood circulation. It may be caused by a cardiac electrical event, as when the HR is too fast (especially ventricular tachycardia or ventricular fibrillation) or too slow (bradycardia or AV block) or when there is no heart rate at all (asystole). Cardiac arrest may follow respiratory arrest; it may also occur when elec-trical activity is present but there is ineffective cardiac contraction or circulating volume, which is called pulseless electrical activ-ity (PEA). Formerly called electrical-mechanical dissociation(EMD), PEA can be caused by hypovolemia (eg, with excessive bleeding), cardiac tamponade, hypothermia, massive pulmonary embolism, medication overdoses (eg, tricyclic agents, digitalis, beta-blockers, calcium channel blockers), significant acidosis, and massive acute myocardial infarction.

Consciousness, pulse, and blood pressure are lost immediately. Ineffective respiratory gasping may occur. The pupils of the eyes begin dilating within 45 seconds. Seizures may or may not occur.

The risk of irreversible brain damage and death increases with every minute from the time that circulation ceases. The interval varies with the age and underlying condition of the patient. Dur-ing this period, the diagnosis of cardiac arrest must be made, and measures must be taken immediately to restore circulation.

The ABCDs of basic cardiopulmonary resuscitation (CPR) are airway, breathing, circulation, and defibrillation (Guidelines2000 for Cardiopulmonary Resuscitation and Emergency Car-diovascular Care, 2000). Once loss of consciousness has been established, the resuscitation priority for the adult in most cases is placing a phone call to activate the code team or the emer-gency medical system (EMS). Exceptions to this include near drowning, drug or medication overdose, and respiratory arrest situations, for which 1 minute of CPR should be performed be-fore activating the EMS. Because the underlying cause of arrest in an infant or child is usually respiratory, the priority is to begin CPR and then activate the EMS after 1 minute of CPR. Because the care of the pediatric patient is individualized, the following discussion on the care of a cardiac arrest patient ap-plies only to adults.

Resuscitation consists of the following steps:

If the patient is monitored or is immediately placed on the monitor using the multifunction pads or the quick-look paddles (found on most defibrillators) and the ECG shows ventricular tachycardia or ventricular fibrillation, defibrillation rather than CPR is the treatment of choice. In this scenario, CPR is per-formed initially only if the defibrillator is not immediately avail-able. The survival rate decreases by 10% for every minute that defibrillation is delayed (Guidelines, 2000). If the patient has not been defibrillated within 10 minutes, the chance of survival is close to zero.

The first step in CPR is to obtain an open airway. Any obvious material in the mouth or throat should be removed. The chin is directed up and back, or the jaw (mandible) is lifted forward. The rescuer “looks, listens, and feels” for air movement. An oropha-ryngeal airway is inserted if available. Two rescue ventilations over 3 to 4 seconds are provided using a bag-mask or mouth-mask device (Fig. 30-5). An obstructed airway should be sus-pected when the rescuer cannot give the initial ventilations, and the Heimlich maneuver or abdominal thrusts should be admin-istered to relieve the obstruction. 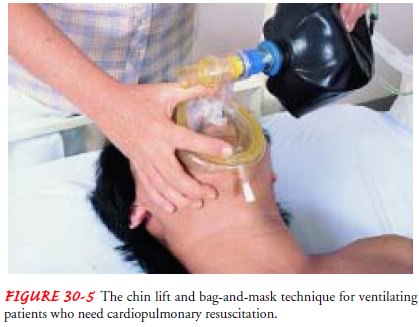 If the first rescue ventilations enter easily, the patient is venti-lated with 12 breaths per minute, and the open airway is main-tained. Endotracheal intubation is frequently performed by a physician, nurse anesthetist, or respiratory therapist during a re-suscitation procedure (also called a code) to ensure an adequate airway and ventilation. The resuscitation bag device is then con-nected directly to the endotracheal tube.

Because of the risk of unrecognized esophageal intubation or dislodgement of the endotracheal tube (ET), tracheal intubation must be confirmed by one technique from each of two different methods: a primary method (visualization of the ET through the vocal cords, auscultation of breath sounds in five areas on the chest, or bilateral chest expansion) and a secondary method (an esophageal detector device [such as Ambu TubeChek] or an end-tidal CO2 detector). The end-tidal CO2 detectors available give qualitative (yes/no) or quantitative (measurable; ie, capnometry) results. Because delivery of CO2 is low in patients in cardiopulmonary arrest, the qualitative devices are not as accurate in detecting incorrect placement as are esophageal detector devices (EDDs). There are two main types of EDD: a bulb type and a syringe type.

The bulb is collapsed or the plunger of the syringe compressed before its attachment to the ET; each creates a suction force at the end of the ET. If the ET is in the trachea, the presence of air in the lungs and the rigid walls of the trachea allow re-inflation of the bulb or aspiration of the syringe. If the ET is in the esopha-gus, the suction pulls on the unsupported walls of the esophagus, causing them to collapse and preventing the bulb from re-inflating or the syringe to aspirate. A chest x-ray, which is fre-quently obtained after ET placement, is helpful in determining whether the ET is too high, too low, or in a main bronchus. However, a chest x-ray cannot confirm placement of an ET. The ET may be in the esophagus or the trachea and result in the same appearance on the x-ray (Guidelines, 2000). Arterial blood gas levels are measured to guide oxygen therapy.

After performing ventilation, the carotid pulse is assessed and ex-ternal cardiac compressions are provided when no pulse is de-tected. If a defibrillator is not yet available but a process has been put into place to obtain one, chest compressions are initiated. Compressions are performed with the patient on a firm surface, such as the floor, a cardiac board, or a meal tray. The rescuer (fac-ing the patient’s side) places the heel of one hand on the lower half of the sternum, two fingerwidths (3.8 cm [1.5 inches]) from the tip of the xiphoid and positions the other hand on top of the first hand (Fig. 30-6) (Guidelines, 2000). The fingers should not touch the chest wall. 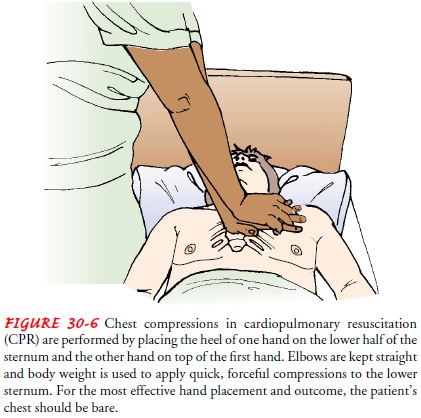 Using the body weight while keeping the elbows straight, the rescuer presses quickly downward from the shoulder area to de-liver a forceful compression to the victim’s lower sternum about 3.8 to 5 cm (1.5 to 2 inches) toward the spine (Guidelines, 2000). The chest compression rate is 80 to 100 times per minute. If only one rescuer is available, the rate is two ventila-tions to every 15 cardiac compressions. When two rescuers are available, the first person performs the cardiac compressions, pausing after the fifth compression, when the second rescuer gives one ventilation over 1.5 to 2 seconds and at a tidal volume of less than 1 L.

When the code team or emergency medical personnel arrive, the patient is quickly assessed to determine cardiac rhythm and res-piratory status, as well as possible causes for the arrest. The specific subsequent advanced life support interventions depend on the as-sessment results. For example, after the patient is placed on a car-diac monitor and ventricular fibrillation is detected, the patient will be defibrillated up to three times, and then CPR will be resumed. However, if asystole is detected on the monitor, CPR is resumed immediately while trying to identify the underlying cause, such as hypovolemia, hypothermia, or hypoxia. CPR may be stopped when the patient responds and begins to breathe, the rescuers are too exhausted or at risk (eg, the building is at risk of collapsing) to continue CPR, or signs of death are obvious. If the patient does not respond to therapies given during the arrest, the resuscitation effort may be stopped or “called” by the physician. The decision to ter-minate resuscitation is based on medical considerations and takes into account the underlying condition of the patient and the chances for survival.

Once successfully resuscitated, the patient is transferred to an in-tensive care unit for close monitoring. Continuous ECG moni-toring and frequent blood pressure assessments are essential until hemodynamic stability is reestablished. Etiologic factors that pre-cipitated the arrest, such as metabolic or rhythm abnormalities, must be identified and treated. Possible contributing factors, such as electrolyte or acid-base imbalances, need to be identified and corrected. Selected medications, as described in Table 30-5, may be used during and after resuscitation. 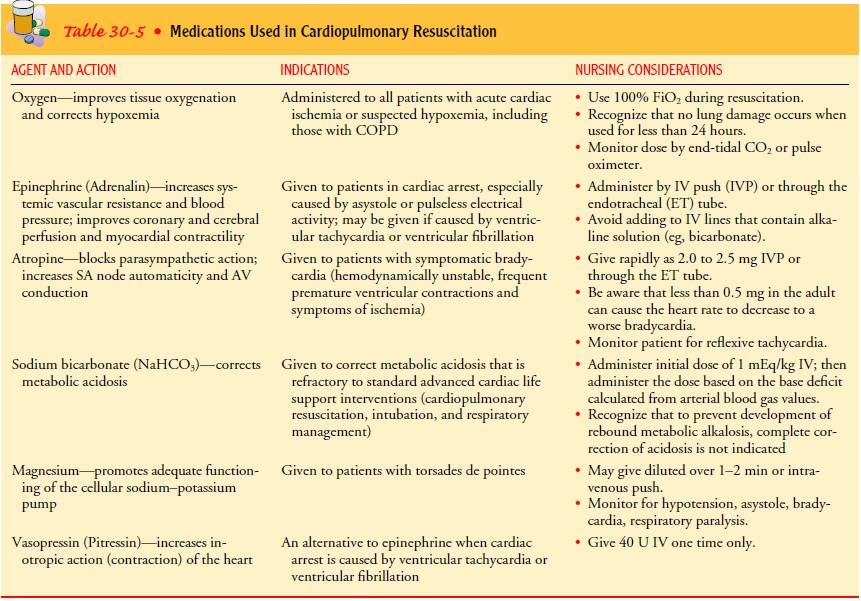