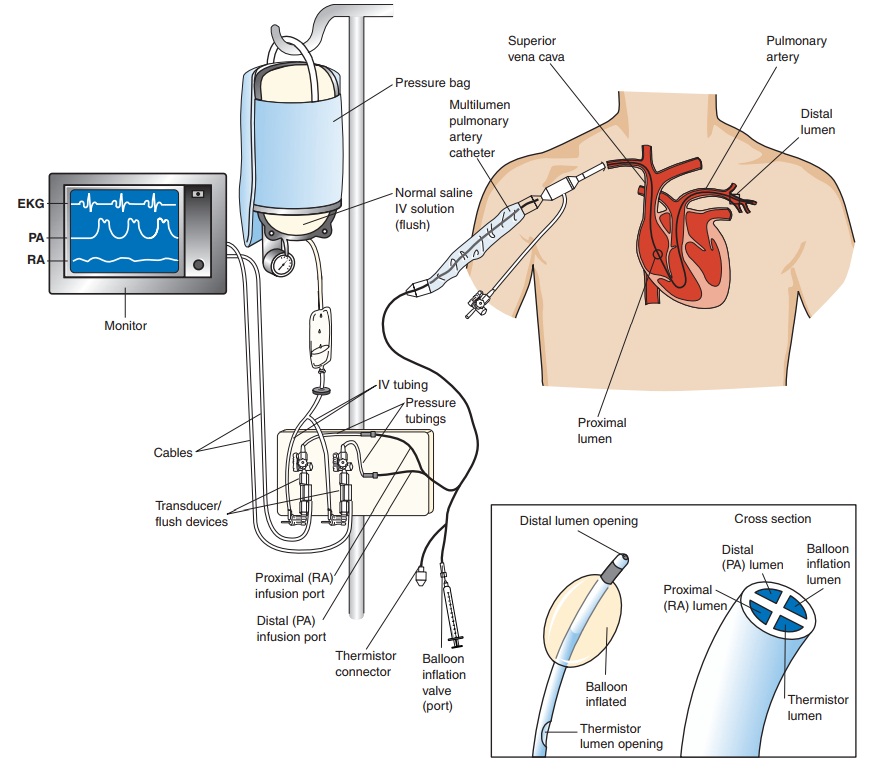 The basic function of the heart is to pump blood. The heart’s ability to pump is measured by cardiac output (CO), the amount of blood pumped in 1 minute.

The basic function of the heart is to pump blood. The heart’s ability to pump is measured by cardiac output (CO), the amount of blood pumped in 1 minute. CO is determined by measuring the heart rate (HR) and multiplying it by the stroke volume (SV), which is the amount of blood pumped out of the ventricle with each contraction. CO usually is calculated using the equationCO = HR × SV.

One of the factors controlling HR is the autonomic nervous system. When SV falls, the nervous system is stimulated to increase HR and thereby maintain adequate CO. SV depends on three factors: preload, afterload, and contractility.

Afterload refers to the amount of resistance to the ejection of blood from the ventricle. To eject blood, the ventricle must overcome this resistance. Afterload is inversely related to SV. The major factors that determine afterload are the diameter and distensibility of the great vessels (aorta and pulmonary artery) and the opening and competence of the semilunar valves (pulmonic and aortic valves). The more open the valves, the lower the resistance. If the patient has significant vasoconstriction, hypertension, or a narrowed opening from a stenotic valve, resistance (afterload) increases. When afterload increases, the workload of the heart must increase to overcome the resistance and eject blood.

Contractility, which refers to the force of contraction, is related  to  the  number  and  status  of  myocardial  cells.  Catecholamines, released by sympathetic stimulation such as exercise or from administration of positive inotropic medications, can increase contractility and stroke volume. MI causes necrosis of some myocardial cells, shifting the workload to the remaining cells. Significant loss of myocardial cells can decrease contractility and cause HF. Afterload must be reduced by stress reduction techniques or medications to match the lower contractility.

Several noninvasive assessment findings can indicate cardiac he-modynamic status, although the findings do not directly correlate to preload, afterload, or contractility. Right ventricular preload may be estimated by measuring jugular venous distention. Elevated left ventricular preload may be identified by a positive hepatojugu-lar test. Mean arterial blood pressure is a rough indicator of left ven-tricular afterload. Activity tolerance may be used as an indicator of overall cardiac functioning.

Impedance cardiography (ICG) is a noninvasive method for continuous calculation of SV, CO, systemic vascular resistance, ventricular contractility, and fluid status (Turner, 2000). Elec-trodes are placed on the patient’s chest. The electrodes are con-nected to a device that transmits a very small amount of alternating electric current through the chest and measures the resistance (Z) to the flow (conduction) of the current. Because the current seeks the path of least resistance and fluid is an excellent conductor, the current flows through the blood. ICG measures the volume of blood flow.

The cardiac cycle produces normal changes in blood flow vol-ume; for example, there is more blood flow volume during systole and less blood flow volume during diastole. The changes in blood flow volume change the resistance to flow of the current, which is called electrical impedance (dZ). During systole, the higher blood flow volume causes the red blood cells to be aligned in a more par-allel pattern, which makes the flow of current faster and reduces impedance. During diastole, the lower blood flow volume causes the red blood cells to be more randomly arranged, which makes the flow of current slower and increases impedance. Stroke vol-ume is determined by comparing dZ to the changes in time (dt) (Von Rueden & Turner, 1999). The preejection period (PEP) and ventricular ejection times (VET) can be measured, which further assists in understanding the hemodynamic status of the patient. For example, a dysfunctional left ventricle requires more time to generate pressure to overcome the resistance to ejection so that the aortic valve opens (increased PEP) and has less time during which blood is ejected into the aorta (decreased VET).

An important method for evaluating the components of SV in a hemodynamically unstable patient is the pulmonary artery (PA) catheter, which is used to obtain the hemodynamic data essential for diagnosis and treatment . Connected to a com-puterized transducer apparatus, the PA catheter serves as a fluid-filled conduit for detecting pressure changes within the heart. The pulsatile changes in pressure are converted into electrical sig-nals, which are displayed as waveforms on a monitor (Fig. 30-1; Chart 30-1). 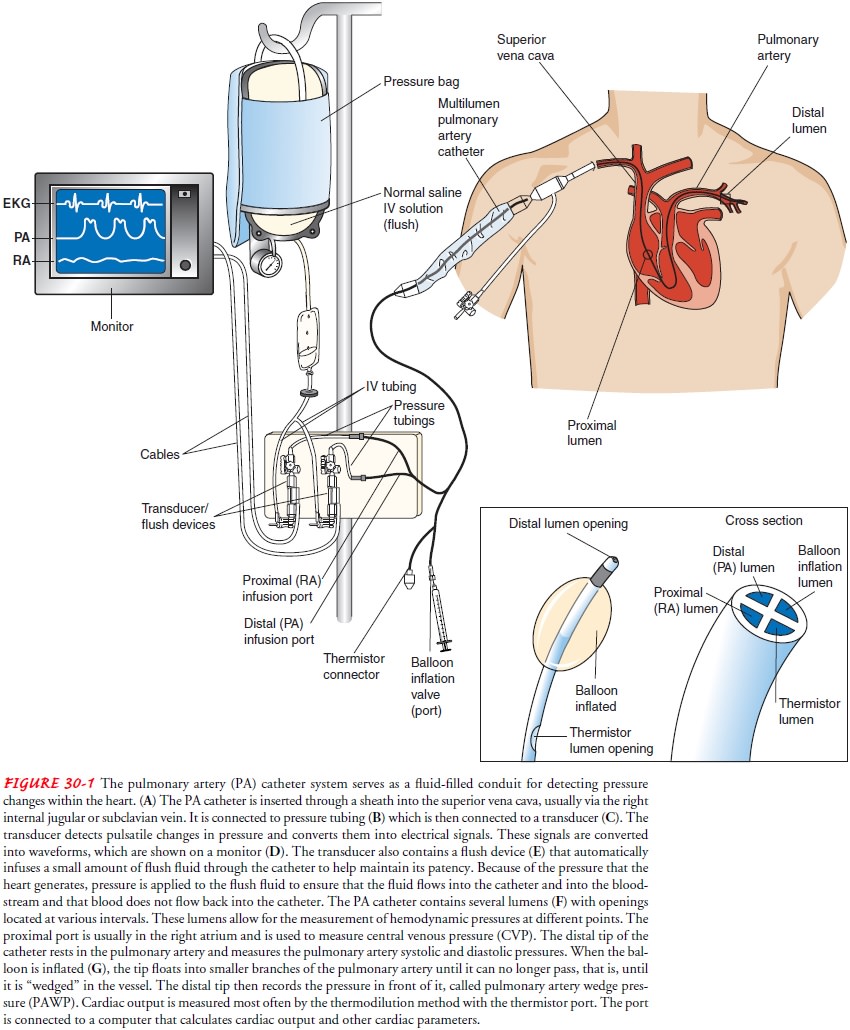 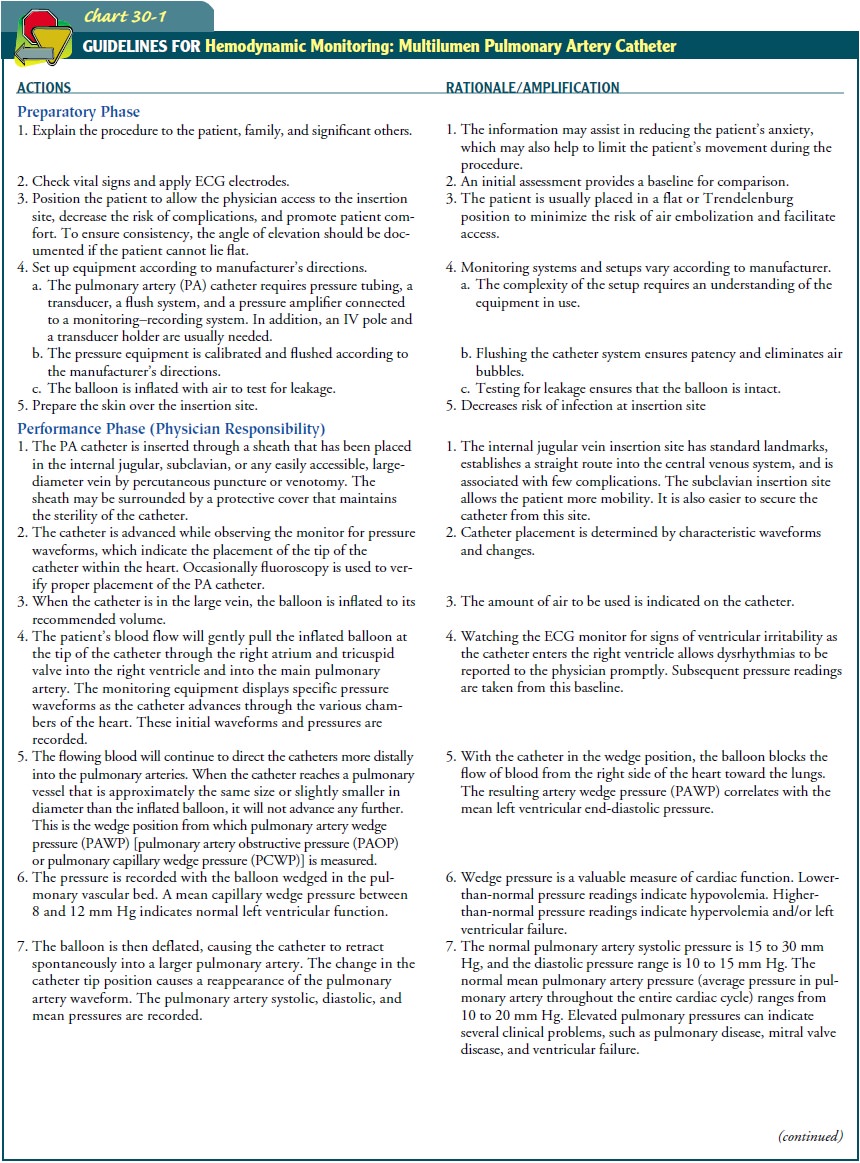 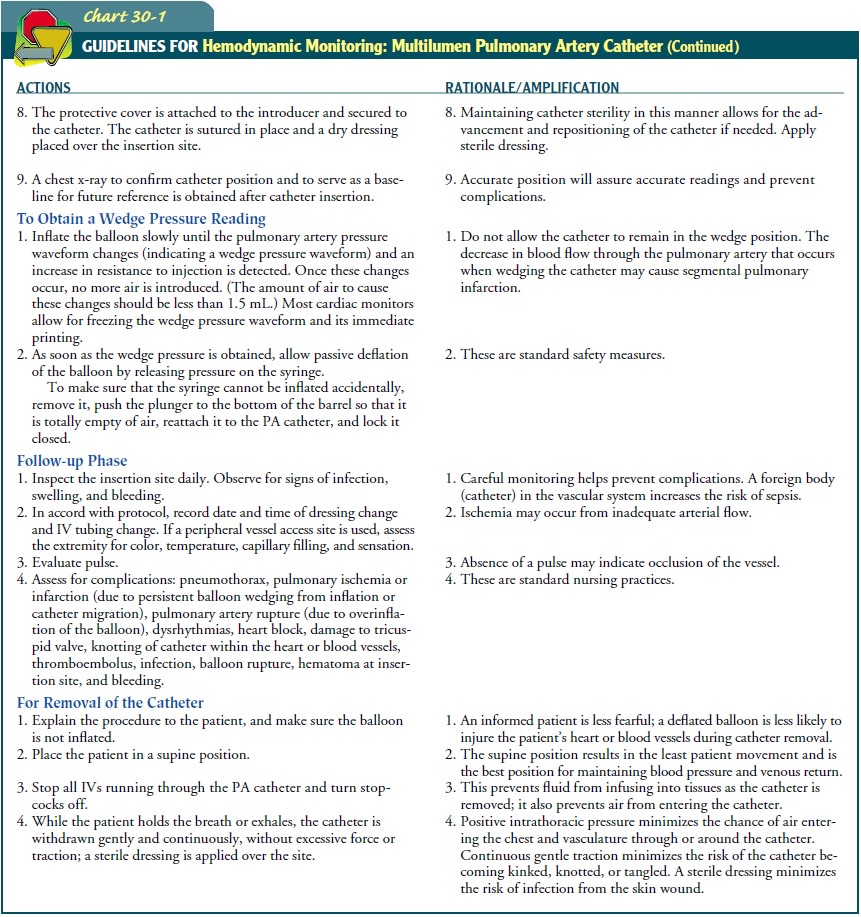 CO is measured most often by the thermodilution method with the thermistor port of the catheter. The port is connected to a computer that calculates CO and other cardiac parameters. In thermodilution, a specific volume of fluid that is colder than the patient’s blood is injected into the proximal port (right atrium). The fluid enters the right ventricle and is then ejected into the PA. The thermistor records the temperature before and after the ejection of fluid. The change in temperature is inversely related to CO; the greater the CO, the faster the blood and fluid moves, the less time the fluid has to mix with the blood to cause a changein temperature, and the less change in temperature detected by the thermistor.

Cardiac parameters for afterload and contractility are calcu-lated at the same time as CO (Table 30-1). Measurements of the various pressures are made at intervals. Therapy, especially intra-venous medication, is adjusted based on the assessment and di-agnostic findings.

The patient with an invasive hemodynamic catheter is usu-ally managed in an intensive care environment (see Chart 30-1) because of the need for frequent nursing assessments and inter-ventions.