Campylobacter: Properties of the Bacteria

Campylobacter infections are one of the most common bacte-rial infections in humans. They cause both diarrheal and other systemic diseases. 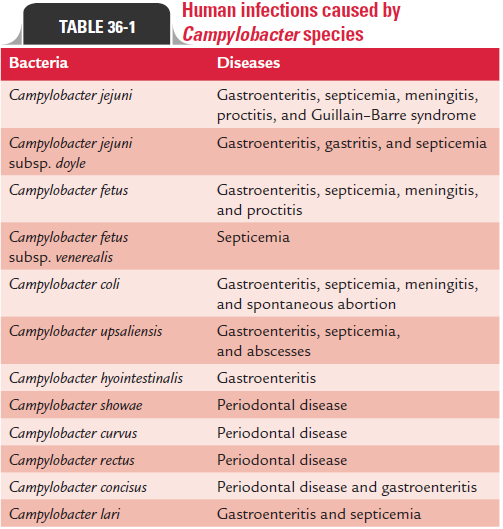 ·  They show a rapid darting motility in cork screw fashion by means of a single polar flagellum at one or both poles (monotrichous/amphitrichous).

Selective media for Campylobacter species are blood-based and antibiotics-containing media, such as Skirrow’s, Butzler, and Campy-BAP selective media. Campylobacter on these media produce well-formed colonies after 48 hours of incubation.

·    They are oxidase positive, catalase positive (C. jejuni subsp. doyle is an exception), and nitrate positive.

Susceptibilitytophysicalandchemicalagents: Campylobacterspp. survive at 4°C in Cary–Blair transport medium for many weeks.Campylobacter spp. are sensitive to hydrochloric acid in the stomach, and so conditions that decrease or neutralize gas-tric acid secretion reduce the amount of inoculum needed to cause disease.