C. jejuni possesses many virulence factors, such as enterotox-ins, lipopolysaccharide (LPS), adhesins, and cytotoxic enzymes (Table 36-2). However, specific role of these virulence factors in the pathogenesis of disease is not well-known. 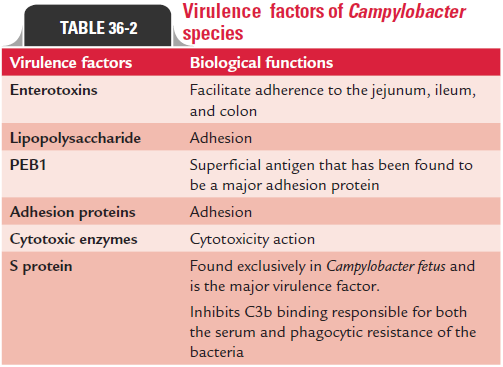 Human infection follows ingestion of 1000–10,000 bacteria, but the illness is infrequent with a dose of less than 10,000 bac-teria. Following three mechanisms have been postulated in the pathogenesis of intestinal disease caused by C. jejuni:

1. Adherence and production of heat-labile enterotoxins:C. jejuni adheres to the jejunum, ileum, and colon. Adherenceto epithelial cells or mucus at these sites is possibly facili-tated by flagella. LPS or other outer membrane compo-nents are also believed to contribute to adhesion. PEB1 is a superficial antigen that has been found to be a major adhesion protein, which is found among C. jejuni strains. Furthermore, C. jejuni enterotoxin is a heat-labile cholera-like enterotoxin, which is responsible for diarrhea observed during infections.

2. Invasion and proliferation of bacteria within the intes-tinal epithelium: C. jejunicauses characteristic histologic

damage in the mucosal surface of the jejunum, ileum, and colon. The organism produces diffuse, bloody, edematous, and exudative enteritis. Infiltration of lamina propria occurs with neutrophils, mononuclear cells, and eosino-phils. It is also associated with crypt abscesses in the epi-thelial glands and ulceration of the mucosal epithelium. Precise role of enterotoxins and cytopathic toxins in causa-tion of intestinal pathology is not known.

C. fetus is more frequently associated with systemic infections,such as bacteremia. A single protein, namely, S protein, found in C. fetus is the major virulence factor. It inhibits C3b binding responsible for both the serum and phagocytic resistance of the bacteria. Hence, it makes the bacteria resistant to the bacteri-cidal effects of serum.

Acute infection caused by C. jejuni confers immunity with devel-opment of specific IgG, IgM, and IgA antibody in the serum and also IgA antibodies in intestinal secretions. Both humoral and cell-mediated immunity are important in prevention and termination ofC. jejuni infections.