Cerebrospinal fluid and lymph are other important body fluids which are devoid of red blood cells and so they look colourless.

Cerebrospinal fluid and lymph are other important body fluids which are devoid of red blood cells and so they look colourless.

CSF is formed by the choroid plexus of the brain and is an ultrafiltrate of the plasma. It is present in the central ventricles, spinal canal and subarachnoid spaces. The total volume of CSF is 100-150ml. 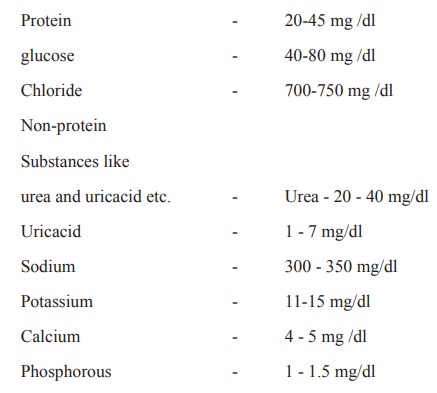 It acts as a protective jacket for the brain and spinal cord and maintains a uniform pressure on the nervous structures. It acts as a reservoir to regulate the contents of the cranium. To a limited extent it act as a medium for nutrient exchange in the nervous system.

The composition of CSF is altered in the following diseased conditions in human beings.

The term ‘lymph’ denotes a fluid not only present in the lymphatic vessels but also the fluid which bathes in the cells and the tissue.

It resembles plasma in its components and their composition which can permeate the capillary wall but there are some differences in electrolyte concentrations.

About 2 litres of lymph are drained into the blood stream per day. Lymph flow is very slow. The protein present in entire plasma in an adult human is about 210 gm. About 1/3rd of this leaks out into the lymph through the interstitial fluid and is returned to the blood at the thoracic duct. If the thoracic lymph is drained off, the concentration of plasma proteins fall and the blood volume decreases

Lymph is the main route of absorption of long chain fatty acids, partially digested fats, diacyl glycerol and cholesterol from the intestine and their transport via the thoracic duct. Lymph also helps to keep the tissues from drying up by maintaining contact with the interstitial fluids.