Benign Conditions of the Breast

Benign Conditions of the Breast

Fibrocystic breast changes occur as ducts dilate and cysts form.This condition occurs most commonly in women ages 30 to 50 years. Although the cause is unknown, estrogen appears to be a factor because cysts usually disappear after menopause. Cystic areas often fluctuate in size, depending on the menstrual cycle. They are usually larger premenstrually and smaller postmenstru-ally because of the retention of fluid in the days preceding the menstrual period. The cysts may be painless or may become very tender premenstrually. Occasionally, a patient may report breast pain, which is usually intermittent and can be shooting or a dull ache (Table 48-1 describes various breast masses). Breast pain (mastalgia) is usually related to hormonal fluctuations and their effect on the breasts or is stimulated by irritation of a nerve in the chest wall from an activity such as weight training. 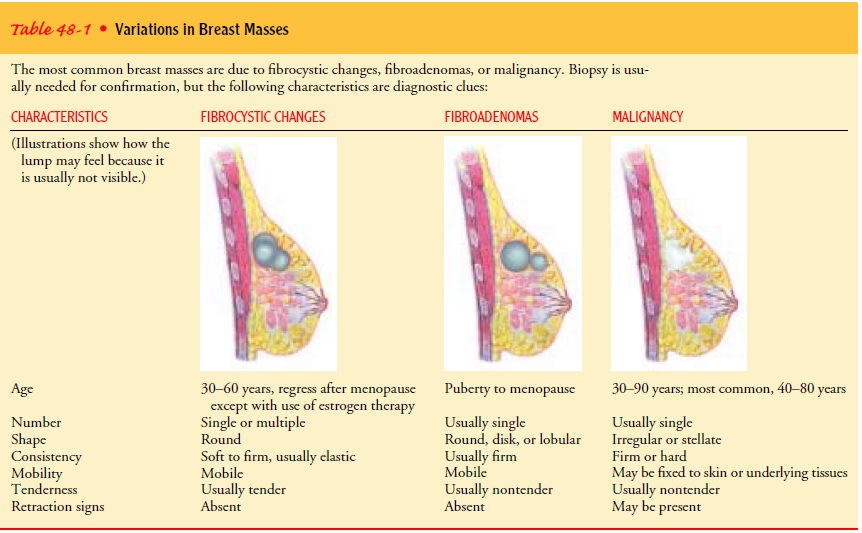 If pain and tenderness are severe, danazol (Danocrine) may be pre-scribed; this agent has an antiestrogenic effect, therefore decreas-ing breast pain and nodularity. Danazol is used only in severe cases because of its potential side effects, which include flushing, vaginitis, and androgenic changes (virilization).

The nurse may recommend that the patient wear a supportive bra both day and night for a week except during bathing, decrease her salt and caffeine intake, and take ibuprofen (Motrin, Advil) as needed for its anti-inflammatory actions. Vitamin E supplements or oil of evening primrose (an over-the-counter herbal prepara-tion) may also be helpful, but this recommendation is based on anecdotal information from patients, not on research.

If diuretic agents or oral contraceptives are prescribed, the pa-tient should know that symptoms usually recur after these med-ications are discontinued. Patients should also be reassured that breast pain is rarely indicative of cancer in its early stages. If the pain is not relieved after menses begins, however, the woman should see her primary health care provider.

Fibroadenomas are firm, round, movable, benign tumors of the breast that usually affect women in their late teens to late 30s. These masses are nontender and are sometimes removed for diag-nostic certainty.

Cystosarcoma phyllodes is a fibroepithelial lesion that tends to growrapidly. It is rarely malignant and is surgically excised. If it is malignant, mastectomy may follow. Fat necrosis is a rare condition of the breast that is often related to trauma from a blow; however, it may be indistinguishable from carcinoma, and the entire mass is usually excised.

Gigantomastia or macromastia (overly large breasts) is a prob-lem for some women. Weight loss and various medications have been tried to little avail. Reduction mammoplasty is an elective procedure for the patient who is physically or emotionally distressed by this condition. Superficialthrombophlebitis of the breast (Mondor’s disease) is an uncommoncondition that is usually associated with pregnancy, trauma, or breast surgery. Pain and redness occur as a result of a superficial thrombophlebitis in the vein that drains the outer part of the breast. The mass is usually linear, tender, and erythematous. Treatment consists of analgesics and heat.

The two most common diagnoses of benign proliferative breastdisease found on biopsy are atypical hyperplasia and lobular car-cinoma in situ. Both of these diagnoses increase a woman’s risk for the development of breast cancer. Atypical hyperplasia is an abnormal increase in the ductal or lobular cells in the breast and is usually found incidentally in mammographic abnormalities. Atypical hyperplasia increases a woman’s risk for breast cancer about 10% to 20% over a period of 10 years; the risk is greater for premenopausal women and decreases significantly after meno-pause (Hulka & Moorman, 2001). Lobular carcinoma in situ (LCIS) is usually an incidental finding in breast tissue because it cannot be seen on mammography and does not form a palpable lump. Historically, LCIS was considered a premalignant condi-tion, and treatment consisted of a bilateral prophylactic mastec-tomy; however, current research indicates that LCIS is a marker for the risk for invasive breast cancer, which can either be ductal or lobular in origin and can develop in either breast. LCIS in-creases a woman’s risk for breast cancer by about 25% to 40% over a period of 25 years, and the risk does not diminish with time (Frykberg, 1999).

For women at higher risk, a newer technique called ductal lavage may be used. It involves inserting a microcatheter through the nipple while instilling saline and retrieving the fluid for analy-sis. It has been shown to identify atypical cells in this population (Dooley, Ljung, Veronisi et al., 2001), providing women with more information regarding their risk. This procedure, which is done in the office and is well tolerated, was found to be more use-ful at detecting cellular changes within the breast tissue. Contin-ued research is needed to determine its benefit in screening and early detection for women at high risk.

After a woman has been diagnosed with a benign proliferative condition such as atypical hyperplasia or LCIS, she has three treatment options: long-term surveillance (observation), bilat-eral prophylactic mastectomy (a risk-reducing surgical proce-dure), or chemoprevention (using a medication to decrease the risk of developing breast cancer). Each of these options may be offered by a breast specialist, usually associated with a compre-hensive breast center. Most women choose surveillance and at-tempt to modify certain risk factors, such as diet, exercise, and alcohol consumption. For some women, however, prophylactic mastectomy may be an option; taking tamoxifen (Nolvadex) may be an option for others. Tamoxifen has recently been shown to decrease the incidence of invasive breast cancer for high-risk women by 49% (Fisher, Constantino, Wickerham et al., 1998). The risks and benefits of each of these options must be explained so that the woman can make a careful decision.