Automatic identification is a term that refers to various technologies used in automatic or semi automatic acquisition of product data for entry into a computer system.

Automatic identification is a term that refers to various technologies used in automatic or semi automatic acquisition of product data for entry into a computer system.

Classifications of bar codes according to the dimensions of width

A bar code (often seen as a single word, barcode) is the small image of lines (bars) and spaces that is affixed to retail store items, identification cards, and postal mail to identify a particular product number, person, or location. The code uses a sequence of vertical bars and spaces to represent numbers and other symbols. A bar code symbol typically consists of five parts: a quiet zone, a start character, data characters (including an optional check character), a stop character, and another quiet zone.

A barcode is an optical machine-readable representation of data relating to the object to which it is attached. Originally barcodes systematically represented data by varying the widths and spacings of parallel lines, and may be referred to as linear or one-dimensional (1D). Later they evolved into rectangles, dots, hexagons and other geometric patterns in two dimensions (2D). Although 2D systems use a variety of symbols, they are generally referred to as barcodes as well. Barcodes originally were scanned by special optical scanners called barcode readers. Later, scanners and interpretive software became available on devices including desktop printers and smartphones.

An early use of one type of barcode in an industrial context was sponsored by the Association of American Railroads in the late 1960s. Developed by General Telephone and Electronics (GTE) and called KarTrak ACI (Automatic Car Identification), this scheme involved placing colored stripes in various combinations on steel plates which were affixed to the sides of railroad rolling stock. Two plates were used per car, one on each side, with the arrangement of the colored stripes representing things such as ownership, type of equipment, and identification number. The plates were "read" by a trackside scanner located, for instance, at the entrance to a classification yard while the car was moving past The project was abandoned after about ten years because the system proved unreliable after long-term use in the field.

Barcodes became commercially successful when they were used to automate supermarket checkout systems, a task for which they have become almost universal. Their use has spread to many other tasks that are generically referred to as automatic identification and data capture (AIDC). The very first scanning of the now ubiquitous Universal Product Code (UPC) barcode was on a pack of Wrigley Company chewing gum in June 1974.

A barcode reader is used to read the code. The reader uses a laser beam that is sensitive to the reflections from the line and space thickness and variation. The reader translates the reflected light into digital data that is transferred to a computer for immediate action or storage. Bar codes and readers are most often seen in supermarkets and retail stores, but a large number of different uses have been found for them. They are also used to take inventory in retail stores; to check out books from a library; to track manufacturing and shipping movement; to sign in on a job; to identify hospital patients; and to tabulate the results of direct mail marketing returns.

Very small bar codes have been used to tag honey bees used in research. Readers may be attached to a computer (as they often are in retail store settings) or separate and portable, in which case they store the data they read until it can be fed into a computer.

There is no one standard bar code; instead, there are several different bar code standards called symbologies that serve different uses, industries, or geographic needs. Since 1973, the Uniform Product Code (UPC), regulated by the Uniform Code Council, an industry organization, has provided a standard bar code used by most retail stores. The European Article Numbering system (EAN), developed by Joe Woodland, the inventor of the first bar code system, allows for an extra pair of digits and is becoming widely used. POSTNET is the standard bar code used in the United States for ZIP codes in bulk mailing. The following table summarizes the most common bar code standards.

Deciding which scanning technology is right for your application can be a difficult task. Knowing the advantages and applications in which these two technologies are used is the first step to success.

The key to deciding between these two technologies is determining which fits the requirements and budget of your business most accurately. 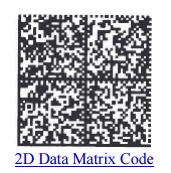 Both laser scanners and digital images are programmed to decode specific symbologies, or the “language,” of barcodes. The symbology used in the application can

help determine which scanning technology will provide the most benefit. The use of 2-

dimensional (2D) symbologies is on the rise in many markets, making digital imagers a better choice. However, for applications that don’t require reading 2D barcodes, laser

scanners are a cost-effective option.

They are of the size of a credit card and are embedded with one or more microchips.

These have a 8 bit or higher level microprocessors and a storage capacity of about 8kB-256kB. Personal identification numbers prevent their unauthorized use.