It may be used in amplifying or switching applications.

Bipolar transistors are so named because their operation involves both electrons and holes.

Charge flow in a BJT is due to bidirectional diffusion of charge carriers across a junction between two regions of different charge concentrations.

3 adjacent regions of doped Si (each connected to a lead):

–  Electrons diffuse from Emitter to Base (from n to p).

– There‘s a depletion layer on the Base-Collector junction  -- -- > no flow of e- allowed.

– BUT the Base is thin and Emitter region is n+ (heavily doped) -- -- >  electrons have enough momentum to cross the Base into the Collector.

–  The small base current IB controls a large current IC 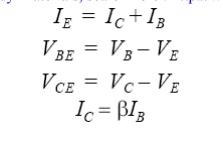 •         The voltages vEB and vCB are positive when they forward bias their respective pn junctions.

•         Collector current and base current exit the transistor terminals and emitter current enters the device.

Emitter current is given by:

Operation of NPN and NPN Transistor 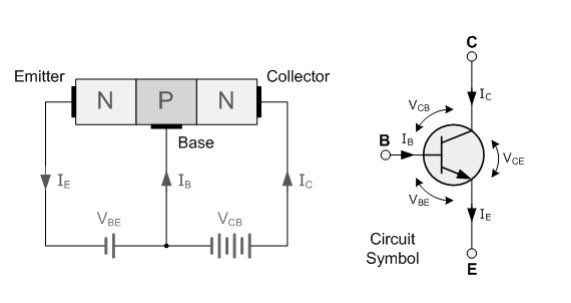 With the emitter-to-base junction in the figure biased in the forward direction, electrons leave the negative terminal of the battery and enter the n- material (emitter).

Since electrons are majority current carriers in the n- material, they pass easily through the emitter, cross over the junction, and combine with holes in the p material (base).

For each electron that fills a hole in the p material, another electron will leave the p material (creating a new hole) and enter the positive terminal of the battery.

The second pn- junction (base-to-collector), or reverse-biased junction as it is called blocks the majority current carriers from crossing the junction.

However, there is a very small current, that does pass through this junction.

This current is called minority current, or reverse current. This current was produced by the electron-hole pairs.

The minority carriers for the reverse-biased pn- junction are the electrons in the p material and the holes in the n- material.

However, the minority current electrons play the most important part in the operation of the npn transistor.

Total current flow in the npn transistor is through the emitter lead. Therefore, in terms of percentage, IE is 100 percent.

On the other hand, since the base is very thin and lightly doped, a smaller percentage of the total current (emitter current) will flow in the base circuit than in the collector circuit.

Usually no more than 2 to 5 percent of the total current is base current (IB) while the remaining 95 to 98 percent is collector current (IC).

A very basic relationship exists between these two currents: 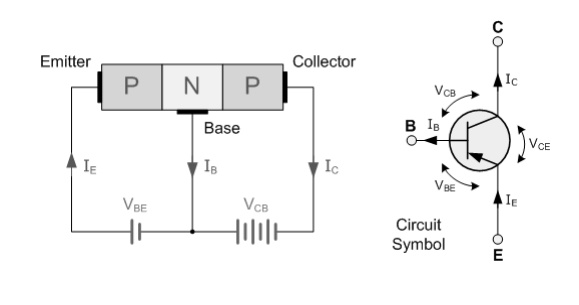 When an emitter hole and a base electron meet, they combine.

For each electron that combines with a hole, another electron leaves the negative terminal of the battery, and enters the base.

At the same time, an electron leaves the emitter, creating a new hole, and enters the positive terminal of the battery.

This movement of electrons into the base and out of the emitter constitutes base current flow (IB), and the path these electrons take is referred to as the emitter-base circuit.

However, this same negative collector voltage acts as forward bias for the minority current holes in the base, which cross the junction and enter the collector.

The minority current electrons in the collector also sense forward bias-the positive base voltage-and move into the base.

The holes in the collector are filled by electrons that flow from the negative terminal of the battery.