An SR Flip-Flop can be considered as a basic one-bit memory device that has two inputs, one which will "SET" the device and another which will "RESET" the device back to its original state and an output Q that will be either at a logic level "1" or logic "0" depending upon this Set/Reset condition.

An SR Flip-Flop can be considered as a basic one-bit memory device that has two inputs, one which will "SET" the device and another which will "RESET" the device back to its original state and an output Q that will be either at a logic level "1" or logic "0" depending upon this Set/Reset condition. A basic NAND Gate SR flip flop circuit provides feedback from its outputs to its inputs and is commonly used in memory circuits to store data bits. The term "Flip-flop" relates to the actual operation of the device, as it can be "Flipped" into one logic state or "Flopped" back into another.

The simplest way to make any basic one-bit Set/Reset SR flip-flop is to connect together a pair of cross-coupled 2-input NAND Gates to form a Set-Reset Bistable or a SR NAND Gate Latch, so that there is feedback from each output to one of the other NAND Gate inputs. This device consists of two inputs, one called the Reset, R and the other called the Set, S with two corresponding outputs Q and its inverse or complement Q as shown below.

Truth Table for this Set-Reset Function 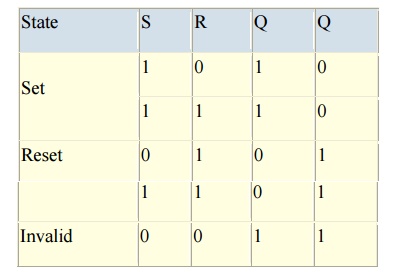 It can be seen that when both inputs S = "1" and R = "1" the outputs Q and Q can be at either logic level "1" or "0", depending upon the state of inputs S or R BEFORE this input condition existed. However, input state R = "0" and S = "0" is an undesirable or invalid condition and must be avoided because this will give both outputs Q and Q to be at logic level "1" at the same time and we would normally want Q to be the inverse of Q. However, if the two inputs are now switched HIGH again after this condition to logic "1", both the outputs will go LOW resulting in the flip-flop becoming unstable and switch to an unknown data state based upon the unbalance. This unbalance can cause one of the outputs to switch faster than the other resulting in the flip-flop switching to one state or the other which may not be the required state and data corruption will exist. This unstable condition is known as its Meta-stable state.

As well as using NAND Gates, it is also possible to construct simple 1-bit SR Flip-flops using two NOR Gates connected the same configuration. The circuit will work in a similar way to the NAND gate circuit above, except that the invalid condition exists when both its inputs are at logic level "1" and this is shown below.

The NOR Gate SR Flip-flop

From the previous tutorial we now know that the basic gated SR NAND Flip-flop suffers from two basic problems: Number 1, the S = 0 and R = 0 condition or S = R = 0 must always be avoided, and number 2, if S or R change state while the enable input is high the correct latching action will not occur. Then to overcome these two problems the JK Flip-Flop was developed.

The JK Flip-Flop is basically a Gated SR Flip-Flop with the addition of clock input circuitry that prevents the illegal or invalid output that can occur when both input S equals logic level "1" and input R equals logic level "1". The symbol for a JK Flip-flop is similar to that of an SR Bistable as seen in the previous tutorial except for the addition of a clock input. 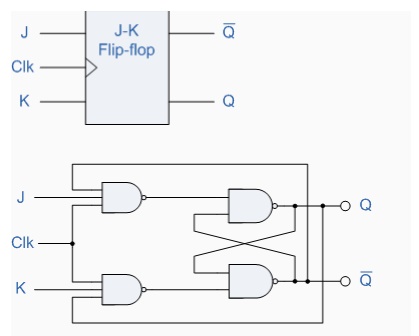 Both the S and the R inputs of the previous SR bistable have now been replaced by two inputs called the J and K inputs, respectively. The two 2-input NAND gates of the gated SR bistable have now been replaced by two 3-input AND gates with the third input of each gate connected to the outputs Q and Q. This cross coupling of the SR Flip-flop allows the previously invalid condition of S = "1" and R = "1" state to be usefully used to turn it into a "Toggle action" as the two inputs are now interlocked. If the circuit is "Set" the J input is inhibited by the "0" status of the Q through the lower AND gate. If the circuit is "Reset" the K input is inhibited by the "0" status of Q through the upper AND gate. When both inputs J and K are equal to logic "1", the JK flip-flop changes state and the truth table for this is given below.

The Truth Table for the JK Function 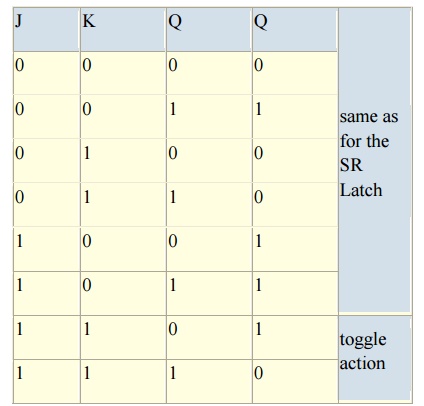 Then the JK Flip-flop is basically an SR Flip-flop with feedback and which enables only one of its two input terminals, either Set or Reset at any one time thereby eliminating the invalid condition seen previously in the SR Flip-flop circuit. Also when both the J and the K inputs are at logic level "1" at the same time, and the clock input is pulsed either "HIGH" or "LOW" the circuit will "Toggle" from a Set state to a Reset state, or visa-versa. This results in the JK Flip-flop acting more like a T-type Flip-flop when both terminals are "HIGH".

Although this circuit is an improvement on the clocked SR flip-flop it still suffers from timing problems called "race" if the output Q changes state before the timing pulse of the clock input has time to go "OFF". To avoid this the timing pulse period (T) must be kept as short as possible (high frequency). As this is sometimes is not possible with modern TTL IC's the much improved Master-Slave JK Flip-flop was developed. This eliminates all the timing problems by using two SR flip-flops connected together in series, one for the "Master" circuit, which triggers on the leading edge of the clock pulse and the other, the "Slave" circuit, which triggers on the falling edge of the clock pulse. 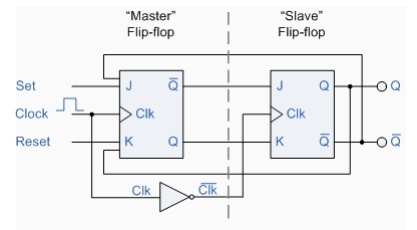