One of the main disadvantages of the basic SR NAND Gate Bistable circuit is that the indeterminate input condition of "SET" = logic "0" and "RESET" = logic "0" is forbidden. That state will force both outputs to be at logic "1", over-riding the feedback latching action and whichever input goes to logic level "1" first will lose control, while the other input still at logic "0" controls the resulting state of the latch.

One of the main disadvantages of the basic SR NAND Gate Bistable circuit is that the indeterminate input condition of "SET" = logic "0" and "RESET" = logic "0" is forbidden. That state will force both outputs to be at logic "1", over-riding the feedback latching action and whichever input goes to logic level "1" first will lose control, while the other input still at logic "0" controls the resulting state of the latch. In order to prevent this from happening an inverter can be connected between the "SET" and the "RESET" inputs to produce a D-Type Data Latch or simply Data Latch as it is generally called. 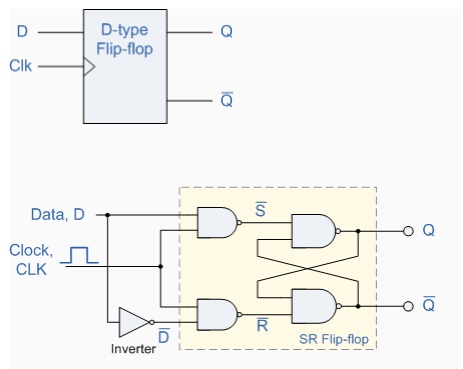 The D-Type Latch will store and output whatever logic level is applied to its data terminal so long as the clock input is high. Once the clock input goes low the SET and RESET inputs of the flip-flop are both held at logic level "1" so it will not change state and store whatever data was present on its output before the clock transition occurred. In other words the output is "latched" at either logic "0" or logic "1".

Truth Table for the D-type Flip-flop 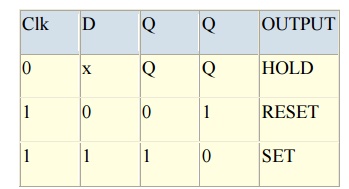 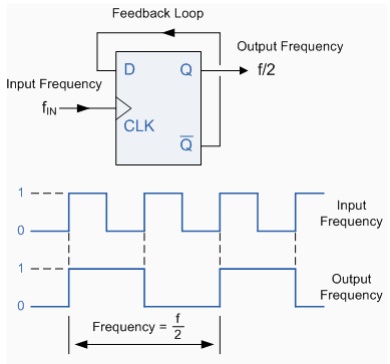 It can be seen from the frequency waveforms above, that by "feeding back" the output from Q to the input terminal D, the output pulses at Q have a frequency that are exactly one half (f/2) that of the input clock frequency, (Fin). In other words the circuit produces Frequency Division as it now divides the input frequency by a factor of two (an octave).

Another use of a Data Latch is to hold or remember its data, thereby acting as a single bit memory cell and IC's such as the TTL 74LS74 or the CMOS 4042 are available in Quad format for this purpose. By connecting together four, 1-bit latches so that all their clock terminals are connected at the same time a simple "4-bit" Data latch can be made as shown below. 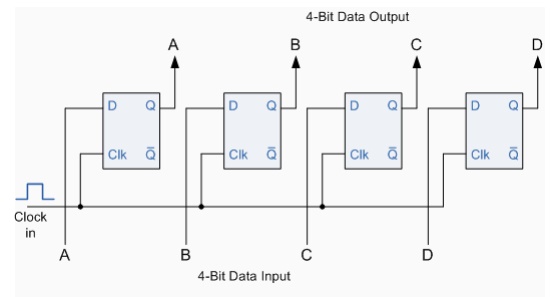 The Data Latch is a very useful devices in electronic and computer circuits. They can be designed to have very high output impedance at both outputs Q and its inverse Q to reduce the impedance effect on the connecting circuit when used as buffers, I/O ports, bi-directional bus drivers or even display drivers. But a single "1-bit" data latch is not very practical to use on its own and instead commercially available IC's incorporate 4, 8, 10, 16 or even 32 individual data latches into one single IC package, and one such IC device is the 74LS373 Octal D-type transparent latch.

synchronous (1) Pertaining to two or more processes that depend upon the occurrence of specific events such as common timing signals. (2) Occurring with a regular or predictable time relationship.

counter (1) A functional unit with a finite number of states each of which represents a number that can be, upon receipt of an appropriate signal, increased by unity or by a given constant. This device is usually capable of bringing the represented number to a specified value; for example zero.

So a "synchronous counter" is actually a functional unit with a certain number of states, each representing a number which can be increaced or decreased upon receiving an appropriate signal (e.g. a rising edge pulse), and is usually used to count to, or count down to zero from, a specified number N.

.Basically, any sequential circuit that goes through a prescribed sequence of states upon the application of input pulses is called a counter. The input pulses, called count pulses, may be clock pulses or they may originate from an external source and may occur at prescribed intervals of time or at random. The sequence of states in a counter may follow a binary count or any other sequence.