Combination Logic Circuits are made up from basic logic NAND, NOR or NOT gates that are "combined" or connected together to produce more complicated switching circuits.

Unlike Sequential Logic Circuits whose outputs are dependant on both their present inputs and their previous output state giving them some form of Memory, the outputs of Combinational Logic Circuits are only determined by the logical function of their current input state, logic "0" or logic "1", at any given instant in time as they have no feedback, and any changes to the signals being applied to their inputs will immediately have an effect at the output. In other words, in a Combinational Logic Circuit, the output is dependant at all times on the combination of its inputs and if one of its inputs condition changes state so does the output as combinational circuits have "no memory", "timing" or "feedback loops".

Combination Logic Circuits are made up from basic logic NAND, NOR or NOT gates that are "combined" or connected together to produce more complicated switching circuits. These logic gates are the building blocks of combinational logic circuits. An example of a combinational circuit is a decoder, which converts the binary code data present at its input into a number of different output lines, one at a time producing an equivalent decimal code at its output.

Truth Table Truth tables provide a concise list that shows the output values in tabular form for each possible combination of input variables.

Logic Diagram Shows the wiring and connections of each individual logic gate that implements the circuit  and all three are shown below. 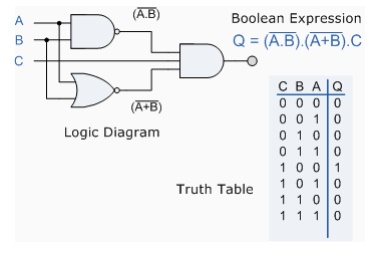 One of the most common uses of combination logic is in Multiplexer and De-multiplexer type circuits. Here, multiple inputs or outputs are connected to a common signal line and logic gates are used to decode an address to select a single data input or output switch. A multiplexer consist of two separate components, a logic decoder and some solid state switches, but before we can discuss multiplexers, decoders and de-multiplexers in more detail we first need to understand how these devices use these "solid state switches" in their design. 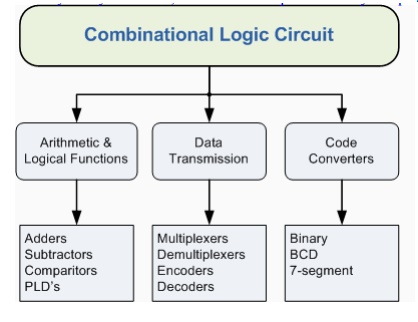