A data selector, more commonly called a Multiplexer, shortened to "Mux" or "MPX", are combinational logic switching devices that operate like a very fast acting multiple position rotary switch. They connect or control, multiple input lines called "channels" consisting of either 2, 4, 8 or 16 individual inputs, one at a time to an output. Then the job of a multiplexer is to allow multiple signals to share a single common output. For example, a single 8-channel multiplexer would connect one of its eight inputs to the single data output. Multiplexers are used as one method of reducing the number of logic gates required in a circuit or when a single data line is required to carry two or more different digital signals.

Digital Multiplexers are constructed from individual analogue switches encased in a single IC package as opposed to the "mechanical" type selectors such as normal conventional switches and relays. Generally, multiplexers have an even number of data inputs, usually an even power of two, n2 , a number of "control" inputs that correspond with the number of data inputs and according to the binary condition of these control inputs, the appropriate data input is connected directly to the output. An example of a Multiplexer configuration is shown below. 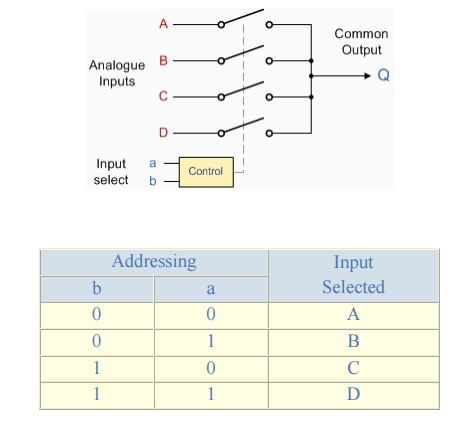 The Boolean expression for this 4-to-1 Multiplexer above with inputs A to D and data select lines a, b is given as:

In this example at any one instant in time only ONE of the four analogue switches is closed, connecting only one of the input lines A to D to the single output at Q. As to which switch is closed depends upon the addressing input code on lines "a" and "b", so for this example to select input B to the output at Q, the binary input address would need to be "a" = logic "1" and "b" = logic "0". Adding more control address lines will allow the multiplexer to control more inputs but each control line configuration will connect only ONE input to the output.

Then the implementation of this Boolean expression above using individual logic gates would require the use of seven individual gates consisting of AND, OR and NOT gates as shown. 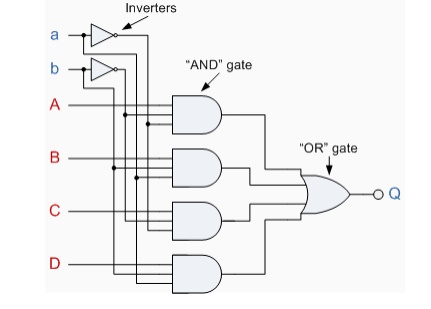 The symbol used in logic diagrams to identify a multiplexer is as follows. 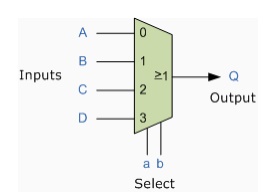 Multiplexers are not limited to just switching a number of different input lines or channels to one common single output. There are also types that can switch their inputs to multiple outputs and have arrangements or 4 to 2, 8 to 3 or even 16 to 4 etc configurations and an example of a simple Dual channel 4 input multiplexer (4 to 2) is given below:

Here in this example the 4 input channels are switched to 2 individual output lines but larger arrangements are also possible. This simple 4 to 2 configuration could be used for example, to switch audio signals for stereo pre-amplifiers or mixers.

The data distributor, known more commonly as a Demultiplexer or "Demux", is the exact opposite of the Multiplexer we saw in the previous tutorial. The demultiplexer takes one single input data line and then switches it to any one of a number of individual output lines one at a time. The demultiplexer converts a serial data signal at the input to a parallel data at its output lines as shown below. 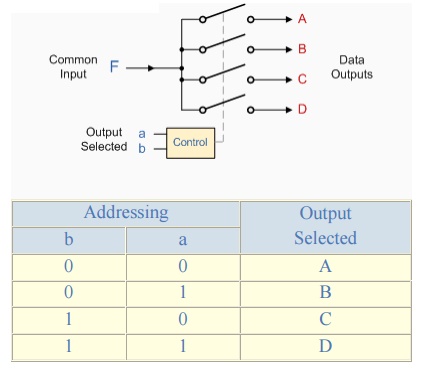 The Boolean expression for this 1-to-4 Demultiplexer above with outputs A to D and data select lines a, b is given as:

The function of the Demultiplexer is to switch one common data input line to any one of the 4 output data lines A to D in our example above. As with the multiplexer the individual solid state switches are selected by the binary input address code on the output select pins "a" and "b" and by adding more address line inputs it is possible to switch more outputs giving a 1-to-2n data line outputs. Some standard demultiplexer IC´s also have an "enable output" input pin which disables or prevents the input from being passed to the selected output. Also some have latches built into their outputs to maintain the output logic level after the address inputs have been changed. However, in standard decoder type circuits the address input will determine which single data output will have the same value as the data input with all other data outputs having the value of logic "0".

The implementation of the Boolean expression above using individual logic gates would require the use of six individual gates consisting of AND and NOT gates as shown. 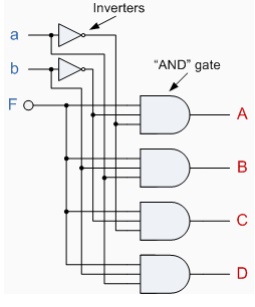 The symbol used in logic diagrams to identify a demultiplexer is as follows. 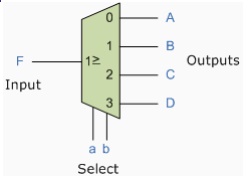