Following CPB, bleeding is controlled, bypass can-nulas are removed, anticoagulation is reversed, and the chest is closed.

Following CPB, bleeding is controlled, bypass can-nulas are removed, anticoagulation is reversed, and the chest is closed. Systolic arterial pressure is generally maintained at less than 140 mm Hg to minimize bleeding. Checking for bleeding, par-ticularly from the posterior surface of the heart, requires lifting the heart, which can cause periods of precipitous hypotension. Some surgeons will need to be informed of the extent and duration of the hypotension; others have greater situational awareness. The atrial cannula(s) is removed before the aortic cannula in case the latter must be used to rapidly administer volume to the patient. Most patients need additional blood volume after ter-mination of bypass. Administration of blood, col-loids, and crystalloid is guided by filling pressures (and observation of the left ventricle on TEE), and the postbypass hematocrit. A final hematocrit of 25–30% is desirable, but is not mandatory. Blood remaining in the CPB reservoir can be transfused via the aortic cannula (while it remains in place) or washed and processed by a cell-saver device and given intravenously. Frequent ventricular ectopy may reflect electrolyte disturbances or residual ischemia and should be treated with amiodarone (or lidocaine or procainamide); hypokalemia or hypomagnesemia should be corrected. Ventricular arrhythmias in this setting can rapidly deteriorate into ventricular tachycardia and fibrillation.

Once hemostasis is judged acceptable and the patient continues to remain stable, heparin activ-ity is reversed with protamine. Protamine is a highly positively charged protein that binds and effectively inactivates heparin (a highly negatively charged polysaccharide). Heparin–protamine complexes are then removed by the reticuloendo-thelial system. Protamine can be dosed in varying ways, but the results of all techniques should be checked for adequacy by repeating the ACT 3–5 min after completion of the protamine infusion. Additional incremental doses of protamine may be necessary. 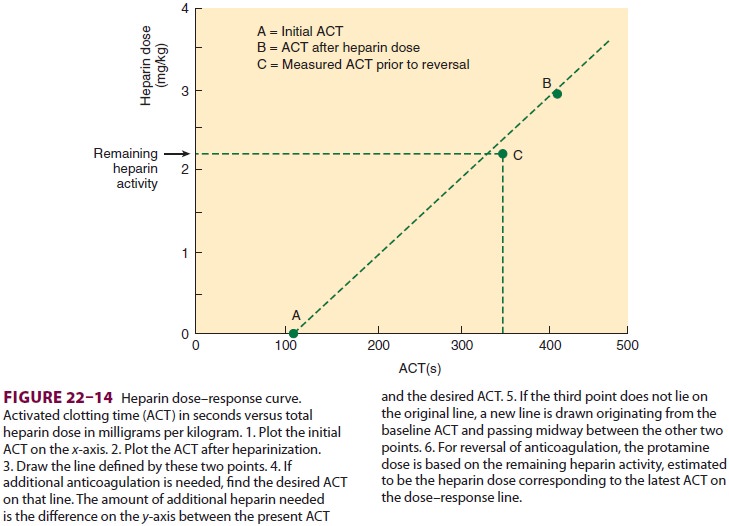 One dosing technique bases the protamine dose on the amount of heparin initially required to pro-duce the desired ACT; the protamine is then given in a ratio of 1–1.3 mg of protamine per 100 units of heparin. A still simpler approach is to give adult patients a defined dose (eg, 3–4 mg/kg) then check for adequacy of reversal. Another approach calculates the protamine dose based on the heparin dose–response curve (Figure 22–14). Automated heparin–protamine titration assays effectively mea-sure residual heparin concentration and can also be used to calculate the protamine dose. The justifica-tion for using this methodology is the observation that when protamine is given in excess it may have anticoagulant activity, although this has never been demonstrated in humans. This approach also assumes that administered protamine remains in circulation for a prolonged time (which has been proven false in studies of patients undergoing car-diac surgery). To accomplish the heparin:protamine titration, premeasured amounts of protamine are added in varying quantities to several wells, each containing a blood sample. The well whose prot-amine concentration best matches the heparin con-centration will clot first. Clotting will be prolonged in wells containing either too much or too little prot-amine. The protamine dose can then be estimated by multiplying the concentration in the tube that clots first by the patient’s calculated blood volume. Supplemental protamine (50–100 mg) should be considered after administration of unwashed blood remaining in the pump reservoir after CPB because that blood contains heparin.Protamine administration can result in a num-ber of adverse hemodynamic effects, some ofwhich are immunological in origin. Protamine given slowly (5–10 min) usually has few effects; when given more rapidly it produces a fairly consistent vasodilation that is easily treated with blood from the pump oxygenator and small doses of phenyl-ephrine. Catastrophic protamine reactions often include myocardial depression and marked pul-monary hypertension. Diabetic patients previously maintained on protamine-containing insulin (such as NPH) may be at increased risk for adverse reac-tions to protamine.

Persistent bleeding oft en follows prolonged durations of bypass (>2 h) and in most instances has multiple causes. Inadequate surgi-cal control of bleeding sites, incomplete reversal of heparin, thrombocytopenia, platelet dysfunc-tion, hypothermia-induced coagulation defects, and undiagnosed preoperative hemostatic defects, or newly acquired factor deficiency or hypofibri-nogenemia may be responsible. The absence (or loss) of clot formation may be noted in the surgical field. Normally, the ACT should return to baseline following administration of protamine; additional doses of protamine (25–50 mg) may be necessary. Reheparinization (heparin rebound) after appar-ent adequate reversal is poorly understood but often attributed to redistribution of peripherally bound heparin to the central compartment and to the exceedingly short persistence of protamine in blood. Hypothermia (<35°C) accentuates hemo-static defects and should be corrected. The admin-istration of platelets and coagulation factors should be guided by additional coagulation studies, but empiric therapy may be necessary when such tests are not readily or promptly available as well as when treating massive transfusion. On the other hand, there can be abnormalities in multiple tests of coag-ulation whether or not there is bleeding, so the true diagnostic specificity and reliability of these tests is often overstated.

If diffuse oozing continues despite adequate surgical hemostasis and the ACT is normal or the heparin–protamine titration assay shows no residual heparin, thrombocytopenia or platelet dysfunction is most likely. Comparison of a conventional ACT with an ACT measured in the presence of hepari-nase (an enzyme that cleaves and inactivates hepa-rin) can confirm that no residual heparin requiring protamine reversal remains present when both tests provide the same result. Platelet defects are recog-nized complications of CPB, which may necessitate platelet transfusion. Significant depletion of coagu-lation factors, particularly factors V and VIII, dur-ing CPB is less commonly responsible for bleeding but should be treated with fresh frozen plasma; both the prothrombin time and partial thromboplas-tin time are usually prolonged in such instances. Hypofibrinogenemia (fibrinogen level <100 mg/dL or a prolonged thrombin time without residual heparin) should be treated with cryoprecipitate. Desmopressin (DDAVP), 0.3 mcg/kg (intravenously over 20 min), can increase the activity of factors VIII and XII and the von Willebrand factor by releasing them from the vascular endothelium. DDAVP may be effective in reversing qualitative platelet defects in some patients but is not recommended for rou-tine use. Accelerated fibrinolysis may occasion-ally be encountered following CPB and should be treated with ε-aminocaproic acid or tranexamic acid if one or the other of these agents has not already being given; the diagnosis should be confirmed by elevated fibrin degradation products (≥32 mg/mL), or evidence of clot lysis on thromboelastography. Increasingly, factor VII concentrate (at a cost of many thousands of dollars) is administered as a “last resort” in the setting of coagulopathic bleeding fol-lowing cardiac surgery.

Unless a continuous intravenous infusion technique is used, additional anesthetic agents are necessary following CPB; the choice may be determined by the hemodynamic response of the patient follow-ing CPB. Traditional teaching would have unstable patients receive small amounts of an opioid, ben-zodiazepine, or scopolamine, whereas anesthetic doses of a volatile agent might be recommended forhyperdynamic patients. Nevertheless, we have found that most patients tolerate modest doses of volatile agents or propofol infusion. Patients with hyper-tension that is unresponsive to adequate anesthesia with opioids and either a volatile agent or propofol (or both) should receive a vasodilator such as nitro-glycerin, nitroprusside, clevidipine, or nicardipine (Table 22–4). Fenoldopam may be used and has the added benefit of increasing renal blood flow which might possibly improve kidney function in the early postoperative period. 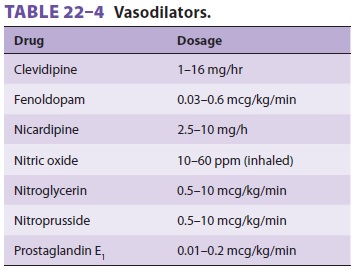 Transporting patients with critical illness from the operating room to the ICU is a consistently nerve-wracking and occasionally hazardous process that is complicated by the possibilities of monitor failure, overdosage or interruption of drug infusions, and hemodynamic instability en route. Portable moni-toring equipment, infusion pumps, and a full oxy-gen cylinder with a self-inflating bag for ventilation should be readied prior to the end of the operation. Minimum monitoring during transportation includes the ECG, arterial blood pressure, and pulse oximetry. A spare endotracheal tube, laryngoscope, succinyl-choline, and emergency resuscitation drugs should also accompany the patient. Upon arrival in the ICU, the patient should be attached to the ventilator, breath sounds should be checked, and an orderly transfer of monitors and infusions (one at a time) should follow. The ICU staff should be given a brief summary of the procedure, intraoperative problems, current drug therapy, and any expected difficulties. Many centers insist on a standard protocol for the “hand off.”