Anatomy of the Upper Respiratory Tract 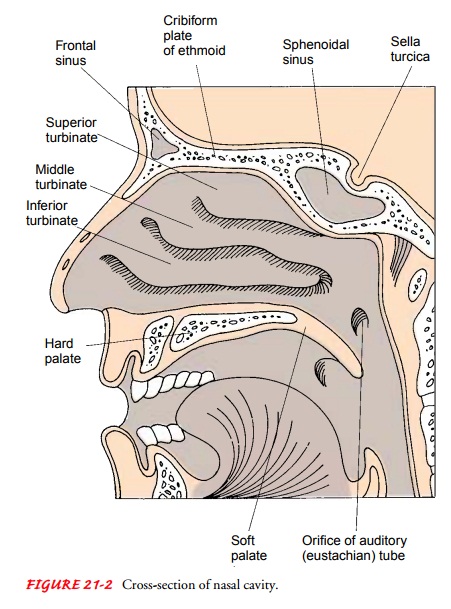 The respiratory system is composed of the upper and lower res-piratory tracts. Together, the two tracts are responsible for ven-tilation (movement of air in and out of the airways). The uppertract, known as the upper airway, warms and filters inspired air so that the lower respiratory tract (the lungs) can accomplish gas exchange. Gas exchange involves delivering oxygen to the tissues through the bloodstream and expelling waste gases, such as car-bon dioxide, during expiration.

ANATOMY OF THE UPPER RESPIRATORY TRACT

The nose is composed of an external and an internal portion. The external portion protrudes from the face and is supported by the nasal bones and cartilage. The anterior nares (nostrils) are the ex-ternal openings of the nasal cavities.

The internal portion of the nose is a hollow cavity separated into the right and left nasal cavities by a narrow vertical divider, the septum. Each nasal cavity is divided into three passageways by the projection of the turbinates (also called conchae) from the lateral walls. The nasal cavities are lined with highly vascular cil-iated mucous membranes called the nasal mucosa. Mucus, se-creted continuously by goblet cells, covers the surface of the nasal mucosa and is moved back to the nasopharynx by the action of the cilia (fine hairs).

The nose serves as a passageway for air to pass to and from the lungs. It filters impurities and humidifies and warms the air as it is inhaled. It is responsible for olfaction (smell) because the ol-factory receptors are located in the nasal mucosa. This function diminishes with age.

The paranasal sinuses include four pairs of bony cavities that are lined with nasal mucosa and ciliated pseudostratified columnar epithelium. These air spaces are connected by a series of ducts that drain into the nasal cavity. The sinuses are named by their location: frontal, ethmoidal, sphenoidal, and maxillary (Fig. 21-1). A prominent function of the sinuses is to serve as a resonating chamber in speech. The sinuses are a common site of infection. 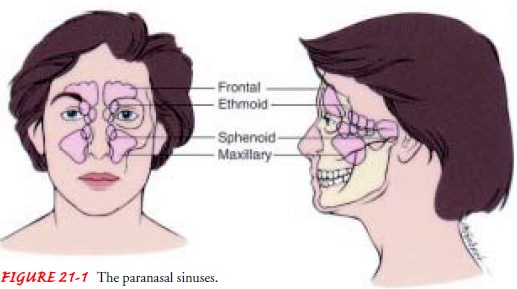 The turbinate bones are also called conchae (the name suggested by their shell-like appearance). Because of their curves, these bones increase the mucous membrane surface of the nasal passages and slightly obstruct the air flowing through them (Fig. 21-2). 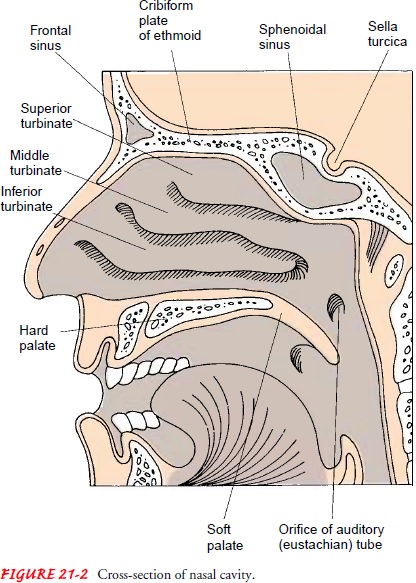 Air entering the nostrils is deflected upward to the roof of the nose, and it follows a circuitous route before it reaches the na-sopharynx. It comes into contact with a large surface of moist, warm mucous membrane that catches practically all the dust and organisms in the inhaled air. The air is moistened, warmed to body temperature, and brought into contact with sensitive nerves. Some of these nerves detect odors; others provoke sneezing to expel irritating dust.

The pharynx, or throat, is a tubelike structure that connects the nasal and oral cavities to the larynx. It is divided into three re-gions: nasal, oral, and laryngeal. The nasopharynx is located pos-terior to the nose and above the soft palate. The oropharynx houses the faucial, or palatine, tonsils. The laryngopharynx ex-tends from the hyoid bone to the cricoid cartilage. The epiglottis forms the entrance of the larynx.

The adenoids, or pharyngeal tonsils, are located in the roof of the nasopharynx. The tonsils, the adenoids, and other lymphoid tissue encircle the throat. These structures are important links in the chain of lymph nodes guarding the body from invasion by or-ganisms entering the nose and the throat. The pharynx functions as a passageway for the respiratory and digestive tracts.

The larynx, or voice organ, is a cartilaginous epithelium-lined structure that connects the pharynx and the trachea. The major function of the larynx is vocalization. It also protects the lower airway from foreign substances and facilitates coughing. It is fre-quently referred to as the voice box and consists of the following:

·  Glottis—the opening between the vocal cords in the larynx

·  Thyroid cartilage—the largest of the cartilage structures; part of it forms the Adam’s apple

·       Vocal cords—ligaments controlled by muscular movements that produce sounds; located in the lumen of the larynx

The trachea, or windpipe, is composed of smooth muscle with C-shaped rings of cartilage at regular intervals. The cartilaginous rings are incomplete on the posterior surface and give firmness to the wall of the trachea, preventing it from collapsing. The trachea serves as the passage between the larynx and the bronchi.