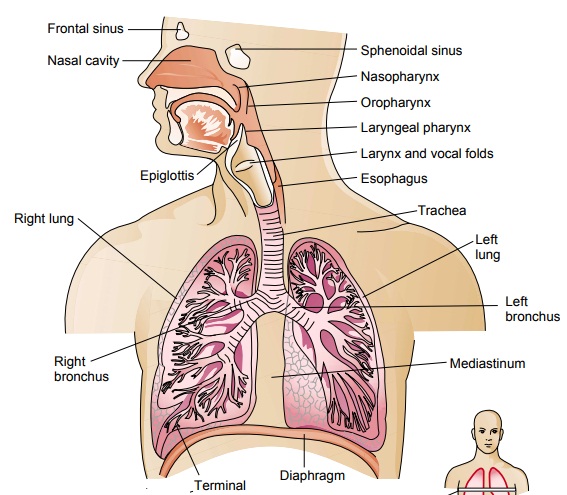 The lower respiratory tract consists of the lungs, which contain the bronchial and alveolar structures needed for gas exchange.

The lower respiratory tract consists of the lungs, which contain the bronchial and alveolar structures needed for gas exchange.

The lungs are paired elastic structures enclosed in the thoracic cage, which is an airtight chamber with distensible walls (Fig. 21-3). Ventilation requires movement of the walls of the thoracic cage and of its floor, the diaphragm. The effect of these movements is alter-nately to increase and decrease the capacity of the chest. When the capacity of the chest is increased, air enters through the trachea (in-spiration) because of the lowered pressure within and inflates the lungs. When the chest wall and diaphragm return to their previous positions (expiration), the lungs recoil and force the air out through the bronchi and trachea. The inspiratory phase of respiration nor-mally requires energy; the expiratory phase is normally passive. In-spiration occurs during the first third of the respiratory cycle, expiration during the latter two thirds. 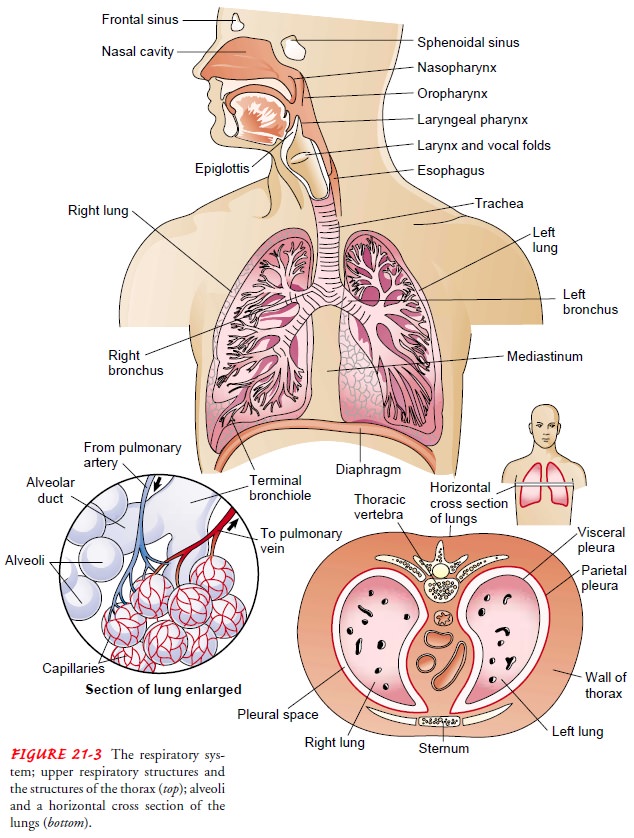 The mediastinum is in the middle of the thorax, between the pleural sacs that contain the two lungs. It extends from the ster-num to the vertebral column and contains all the thoracic tissue outside the lungs.

Each lung is divided into lobes. The left lung consists of an upper and lower lobe, whereas the right lung has an upper, middle, and lower lobe (Fig. 21-4). Each lobe is further subdivided into two to five segments separated by fissures, which are extensions of the pleura. 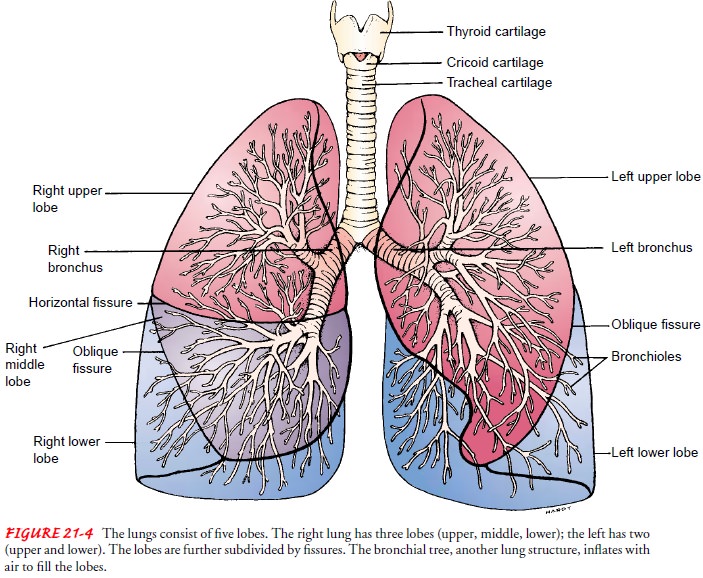 There are several divisions of the bronchi within each lobe of the lung. First are the lobar bronchi (three in the right lung and two in the left lung). Lobar bronchi divide into segmental bronchi (10 on the right and 8 on the left), which are the structures iden-tified when choosing the most effective postural drainage posi-tion for a given patient. Segmental bronchi then divide into subsegmental bronchi. These bronchi are surrounded by con-nective tissue that contains arteries, lymphatics, and nerves.

The subsegmental bronchi then branch into bronchioles, which have no cartilage in their walls. Their patency depends en-tirely on the elastic recoil of the surrounding smooth muscle and on the alveolar pressure. The bronchioles contain submucosal glands, which produce mucus that covers the inside lining of the airways. The bronchi and bronchioles are lined also with cells that have surfaces covered with cilia. These cilia create a constant whipping motion that propels mucus and foreign substances away from the lung toward the larynx.

The lung is made up of about 300 million alveoli, which are arranged in clusters of 15 to 20. These alveoli are so numerous that if their surfaces were united to form one sheet, it would cover 70 square meters—the size of a tennis court.