Alkyl halides are converted to Grignard reagents by treating them with magnesium metal in dry ether.

Alkyl halides are converted to organolithium reagents by treatment with lithium metal in an alkane solvent. They react similarly to Grignard reagents.

Alkyl halides of all types (1°, 2° and 3° ) react with magnesium in dry ether to form Grignard reagents, where the magnesium is ‘inserted’ between the halogen and the alkyl chain (Fig. 1).

These reagents are extremely useful in organic synthesis and can be used in a wide variety of reactions. Their reactivity reflects the polarity of the atoms pre- sent. Since magnesium is a metal it is electropositive, which means that the elec- trons in the C–Mg bond spend more of their time closer to the carbon making it slightly negative and a nucleophilic center. This reverses the character of this carbon since it is an electrophilic center in the original alkyl halide. In essence,  a  Grignard  reagent  can  be  viewed  as  providing  the  equivalent  of  a carbanion. The carbanion is not a distinct species, but the reactions which take place can be explained as if it was.

A Grignard reagent can react as a base with water to form an alkane. This is one way of converting an alkyl halide to an alkane. The same acid–base reaction can take place with a variety of proton donors (Brønsted acids) including functional groups such as alcohols, carboxylic acids, and amines (Fig. 2). This can prove a disadvantage if the Grignard reagent is intended to react at some other site on the target molecule. In such cases, functional groups containing an X–H bond (where X a heteroatom) would have to be protected before the Grignard reaction is carried out.

Alkyl halides can be converted to organolithium reagents using lithium metal in  an alkane solvent (Fig. 3).

Organolithium  reagents  react  similarly  to  Grignard  reagents.  For  example, reaction  with  aldehydes  and  ketones  results  in  nucleophilic  addition  to  give secondary and tertiary alcohols respectively . 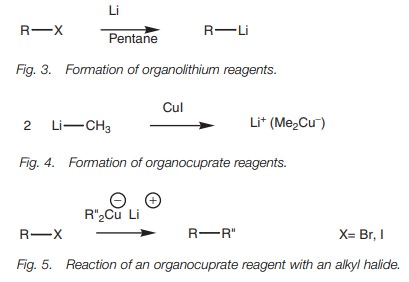 Organocuprate reagents (another source of carbanion equivalents) are prepared by the reaction of one equivalent of cuprous iodide with two equivalents of an organolithium reagent (Fig. 4).

These reagents are useful in the 1,4-addition of alkyl groups to α,β-unsaturated carbonyl systems and can also be reacted with alkyl halides to produce larger alkanes (Fig. 5). The mechanism is thought to be radical based.