Alkyl halides undergo elimination reactions with nucleophiles or bases, where hydrogen halide is lost from the molecule to produce an alkene.

Alkyl halides undergo elimination reactions with nucleophiles or bases, where hydrogen halide is lost from the molecule to produce an alkene.

Elimination is possible if the alkyl halide contains a susceptible β-proton which can be lost during the elimination reaction. β-Protons are situated on the carbon linked to the carbon of the C–X group.

The E2 mechanism is a concerted, one-stage process involving both alkyl halide and nucleophile. The reaction is second order and depends on the concentration of both reactants.

Alkyl halides which have a proton attached to a neighboring β-carbon atomcan undergo an elimination reaction to produce an alkene plus a hydrogenhalide  (Fig. 1).  In  essence,  this  reaction  is  the  reverse  of  the  electrophilicaddition of a hydrogen halide to an alkene.

There are twomechanisms by which this elimination can take place – the E2 mechanism andthe E1 mechanism.

An alkyl halide can undergo an elimination reaction if it has a susceptible proton situated on a β-carbon, that is, the carbon next to the C–X group. This proton is lost during the elimination reaction along with the halide ion. In some respects, there is a similarity here between alkyl halides and carbonyl compounds (Fig. 2). Alkyl halides can have susceptible protons at the β-position whilst carbonyl com-pounds can have acidic protons at their α-position. If we compare both structures, we can see that the acidic/susceptible proton is attached to a carbon neighboring an electrophilic carbon.

The E2 mechanism is a concerted mechanism involving both the alkyl halide and the nucleophile. As a result, the reaction rate depends on the concentration of both reagents and is defined as second order (E2 = Elimination second order). To illustrate the mechanism, we shall look at the reaction of 2-bromopropane with a hydroxide ion (Fig. 3).

The mechanism (Fig. 4) involves the hydroxide ion forming a bond to the susceptible proton. As the hydroxide ion forms its bond, the C–H bond breaks. Both electrons in that bond could move onto the carbon, but there is a neighbor-ing electrophilic carbon which attracts the electrons and so the electrons move in to form a π bond between the two carbons. At the same time as this π bond is formed, the C–Br bond breaks and both electrons end up on the bromine atom which is lost as a bromide ion.

The E2 elimination is stereospecific, with elimination occurring in an anti-periplanar geometry. The diagrams (Fig. 5) show that the four atoms involved in the reaction are in a plane with the H and Br on opposite sides of the molecule. 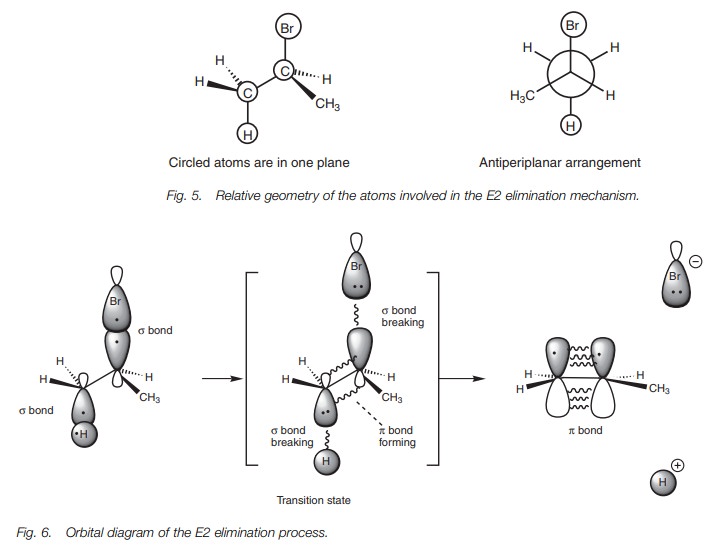 The reason for this stereospecificity can be explained using orbital diagrams (Fig. 6). In the transition state of this reaction, the C–H and C–Br σ bonds are in the process of breaking. As they do so, the sp3 hybridized orbitals which were used for these σ bonds are changing into p orbitals which start to interact with each other to form the eventual π bond. For all this to happen in the one transition state, an antiperiplanar arrangement is essential.

The E1 mechanism usually occurs when an alkyl halide is dissolved in a protic solvent where the solvent can act as a nonbasic nucleophile. These are the same conditions for the SN1 reaction and so both these reactions usually occur at the same time resulting in a mixture of products. As an example of the E1 mechanism, we shall look at the reaction of 2-iodo-2-methylbutane with methanol (Fig. 7). 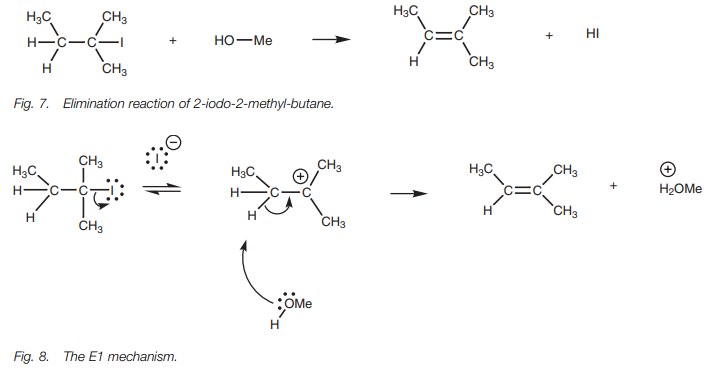 There are two stages to this mechanism (Fig. 8). The first stage is exactly the same process described for the SN1 mechanism and that is cleavage of the C–X bond to form a planar carbocation intermediate where the positive charge is sta- bilized by the three alkyl groups surrounding it. In the second stage, the methanol forms a bond to the susceptible proton on the β-carbon. The C–H bond breaks and both electrons are used to form a π bond to the neighboring carbocation. The first step of the reaction mechanism is the rate-determining step and since this is only dependent on the concentration of the alkyl halide, the reaction is first order (El elimination first order). There is no stereospecificity involved in this reaction and a mixture of isomers may be obtained with the more stable (more substituted) alkene being favored.