The SN1 mechanism is a two-stage mechanism where the first stage is the rate determining step. In the first stage, the C–X bond is broken and the halogen is lost as a halide ion. The remaining alkyl portion becomes a pla-nar carbocation. Since the first stage is the rate-determining step, the rate is dependent on the concentration of the alkyl halide alone. In the second stage of the mechanism, the incoming nucleophile can bond to either side of the carbocation to regenerate ansp3 hybridized, tetrahedral center. The reac-tion is not stereospecific. Asymmetric alkyl halides will be fully or partially racemized during the reaction.

The reaction between methyl iodide and a hydroxide ion is an example of the SN2 mechanism (Fig. 2). The hydroxide ion is a nucleophile and uses one of its lone pair of electrons to form a new bond to the electrophilic carbon of the alkyl halide. At the same time, the C–I bond breaks. Both electrons in that bond move onto the iodine to give it a fourth lone pair of electrons and a negative charge. Since iodine is electronegative, it can stabilize this charge, so the overall process is favored. 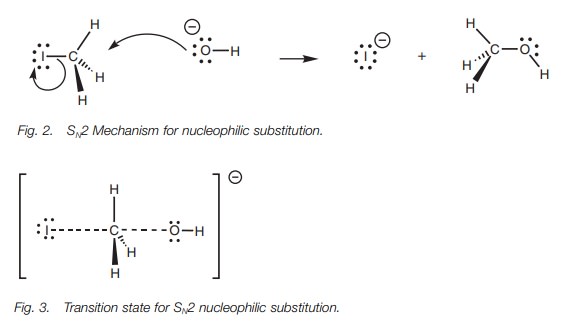 In the transition state for this process (Fig. 3), the new bond from the incoming nucleophile is partially formed and the C–X bond is partially broken. The reaction center itself (CH3) is planar. This transition state helps to explain several other fea-tures of the SN2 mechanism. First of all, both the alkyl halide and the nucleophile are required to form the transition state which means that the reaction rate is dependent on both components. Secondly, it can be seen that the hydroxide ion approaches iodomethane from one side while the iodide leaves from the opposite side. The hydroxide and the iodide ions are negatively charged and will repel each other, so it makes sense that they are as far apart as possible in the transition state. In addition, the hydroxide ion has to gain access to the reaction center – the elec-trophilic carbon. There is more room to attack from the ‘rear’ since the large iodine atom blocks approach from the other side. Lastly from an orbital point of view, it is proposed that the orbital from the incoming nucleophile starts to overlap with the empty antibonding orbital of the C–X bond (Fig. 4). As this interaction increases, the bonding interaction between the carbon and the halogen decreases until a transition state is reached where the incoming and outgoing nucleophiles are both partially bonded. The orbital geometry requires the nucleophiles to be on opposite sides of the molecule.

A third interesting feature about this mechanism concerns the three substituents on the carbon. Both the iodide and the alcohol product are tetrahedral compounds with the three hydrogens forming an ‘umbrella’ shape with the carbon (Fig. 5). However, the ‘umbrella’ is pointing in a different direction in the alcohol product compared to the alkyl halide. This means that the ‘umbrella’ has been turned inside out during the mechanism. In other words, the carbon center has been ‘inverted’. The transition state is the halfway house in this inversion.

There is no way of telling whether inversion has taken place in a molecule such as iodomethane, but proof of this inversion can be obtained by looking at the nucle-ophilic substitution of asymmetric alkyl halides with the hydroxide ion (Fig. 6). Measuring the optical activity of both the alkyl halide and the alcohol allows the configuration of each enantiomer to be identified. This in turn demonstrates that inversion of the asymmetric center takes place. This inversion is known as the ‘Walden Inversion’ and the mechanism is known as the SN2 mechanism. The SN stands for ‘substitution nucleophilic’. The 2 signifies that the rate of reaction is second order or bimolecular and depends on both the concentration of thenucleophile and the concentration of the alkyl halide. The SN2 mechanism is possi-ble for the nucleophilic substitutions of primary and secondary alkyl halides, but is difficult for tertiary alkyl halides. We can draw a general mechanism (Fig. 7) to account for a range of alkyl halides and charged nucleophiles. The mechanism is much the same with nucleophiles such as ammonia or amines – the only difference being that a salt is formed and an extra step is required in order to gain the free amine. 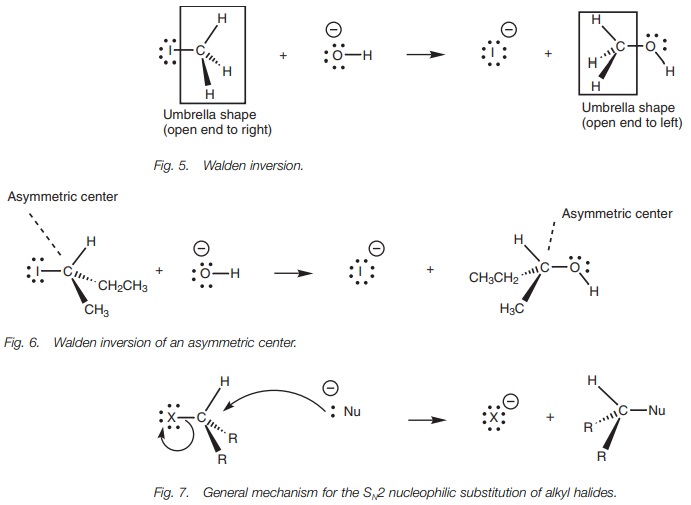 As an example, we shall consider the reaction between ammonia and 1-iodopropane (Fig. 8). Ammonia’s nitrogen atom is the nucleophilic center for this reaction and uses its lone pair of electrons to form a bond to the alkyl halide. As a result, the nitrogen will effectively lose an electron and will gain a positive charge. The C–I bond is broken as previously described and an iodide ion is formed as a leaving group, which then acts as a counterion to the alkylammonium salt. The free amine can be obtained by reaction with sodium hydroxide. This neutralizes the amine to the free base which becomes insoluble in water and precipitates as a solid or as an oil.

When an alkyl halide is dissolved in a protic solvent such as ethanol or water, it is exposed to a nonbasic nucleophile (i.e. the solvent molecule). Under these conditions, the order of reactivity to nucleophilic substitution changes dramatically from that observed in the SN2 reaction, such that tertiary alkyl halides are more reactive then secondary alkyl halides, with primary alkyl halides not reacting at all. Clearly a different mechanism must be involved. As an example, we shall consider the reaction of 2-iodo-2-methylpropane with water (Fig. 9). Here, the rate of reaction depends on the concentration of the alkyl halide alone and the concentration of the attacking nucleophile has no effect. Clearly, the nucleophile has to be present if the reaction is to take place, but it does not matter whether there is one equivalent of the nucleophile or an excess. Since the reaction rate only depends on the alkyl halide, the mechanism is known as the SNl reaction, where SN stands for substitution nucleophilic and the 1 shows that the reaction is first order or unimolecular, that is, only one of the reactants affects the reaction rate.

There are two steps in the SN1 mechanism (Fig. 10). The first step is the rate-determining step and involves loss of the halide ion. The C–I bond breaks with both electrons in the bond moving onto the iodine atom to give it a fourth lone pair of electrons and a negative charge. The alkyl portion becomes a planar car-bocation where all three alkyl groups are as far apart from each other as possible. The central carbon atom is now sp2 hybridized with an empty 2py orbital. In the second step, water acts as a nucleophile and reacts with the carbocation to form an alcohol.

In the mechanism shown, we have shown the water molecule coming in from the left hand side, but since the carbocation is planar, the water can attack equally well from the right hand side. Since the incoming nucleophile can attack from either side of the carbocation, there is no overall inversion of the carbon center. This is significant when the reaction is carried out on chiral molecules. For example, if a chiral alkyl halide reacts with water by the SN1 mechanism, both enantiomeric alcohols would be formed resulting in a racemate. However, it has to be stated that total racemization does not usually occur in SN1 reactions. This is because the halide ion (departing from one side of the molecule) is still in the vicinity when the attacking nucleophile makes its approach. As a result the departing halide ion can hinder the approach of the attacking nucleo-phile from that particular side. The term stereospecific indicates that the mecha-nism results in one specific stereochemical outcome (e.g. the SN2 mechanism). This is distinct from a reaction which is stereoselective where the mechanism can lead to more than one stereochemical outcome, but where there is a preference for one outcome over another. Many SN1 reactions will show a slight stereoselectivity.