● To identify variables and constants in the given terms of an algebraic expression.

● To find the coefficients of the terms of an algebraic expression.

● To add and subtract algebraic expressions with integer co-efficients.

In class VI, we have learnt how geometric patterns and number patterns can be generalised using variables and constants. A variable takes different values which is represented by x,y,z... and constant has numerical values such as 31, − 7, 3/10 etc.

Continuing in the same way, it is clear that if the number of squares (

) to be formed is k (any natural number), then the number of candy sticks required will be 4 × k = 4k, where k is a variable and 4 is a constant.

This can be observed in the following table:

1. Identify the variables and constants among the following terms:

Consider the situation. Murugan’s mother gave him ₹100 to buy 1 kilogram of sugar. If the shopkeeper returned ₹58, what is the price of sugar?

Let us see another situation. Jayashri wants to share chocolates among her friends on her birthday. She had ₹190 in her piggy bank. If she could buy 95 chocolates with that amount, then what is the price of one chocolate? 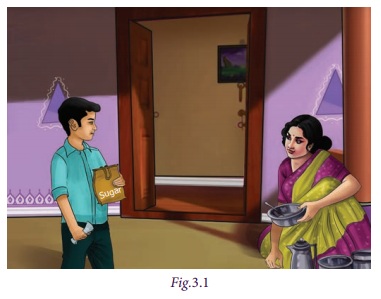 Did you get the answers? How did you work out?

Let us learn more about this interesting branch of mathematics which deals with the methods of finding the unknown values.