We combine variables and constants using the mathematical operations addition and subtraction to construct algebraic expressions.

We combine variables and constants using the mathematical operations addition and subtraction to construct algebraic expressions.

For example, the expression 6x + 1 is obtained by adding two parts 6x and 1. Here 6x and 1 are known as terms. The term 6x is a variable and the term 1 is a constant, since it is not multiplied by a variable. Also we say that 6, x are the factors of the term 6x.

Now let us further try to understand the terms of an algebraic expression.

What is the perimeter of the given figure? 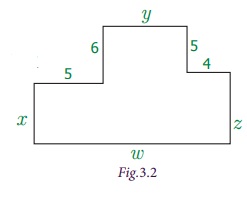 Note that, in the above expression, 5 terms are combined by using addition.

Also, a term may be any one of the following:

iv) a product of constant and a variable/variables such as 5x, −7pq, 3abc,…

Can we use the operations multiplication and division to combine terms?

To further strengthen the understanding of variables and constants, let us do the following activity.

Complete the following table by forming expressions using the terms given. One is done for you.

1. Co-efficient of a term

A co-efficient can either be a numerical factor or an algebraic factor or product of both.

Thus −6 is the numerical co-efficient of the term −6ab.