Now, let us learn to construct simple linear equations and solve them.

Now, let us learn to construct simple linear equations and solve them.

Consider an expression 7x + 3, where x is the variable.

In general, the RHS of an equation is just a number. But, this need not be always be so. The RHS may be an expression containing the variable. For example, the equation 7x + 3 = 3x − 1 has the expression 7x + 3 on the left and 3x − 1 on the right separated by an equality sign.

Let us look at some situations where we have the value of an expression without actually knowing the values of each of the variables.

2. “A rectangle of some dimensions has perimeter 50 cm”.

3. “Thamarai is 4 years elder to her sister Selvi and their ages add upto 24”

The ages of Thamarai and her sister are treated as variables. Although, their ages are different, we consider this as one variable, because the age of Thamarai is associated to the age of Selvi.

Try to construct algebraic equations for the following verbal statements.

An equation is like a weighing balance with equal weights on both of its pans, in which case the arm of the balance are exactly horizontal. 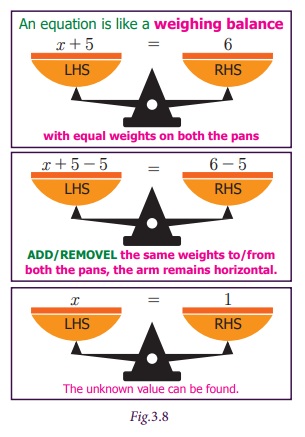 We use the following principles to separate the variables and constants thereby solving an equation.

Why should we subtract 5 and not some other number? Why don’t we add 5 on both sides? Discuss. 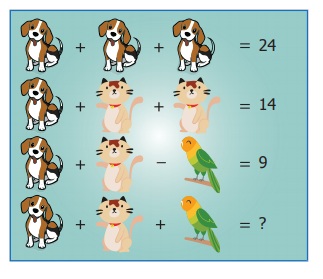 If the dogs, cats and parrots represent unknowns, find them. Substitute each of the values so obtained in the equations and verify the answers.

The numbers are natural and consecutive. Let the numbers be x and x + 1.

Therefore, the required numbers are 37 and 38.

Let the number of notes in each denomination be x.

Divide by 16 on both the sides,

Thus, the number of notes in each denomination is 60.

In an examination, a student scores 4 marks for every correct answer and loses one mark for every wrong answer. If he answers 60 questions in all and gets 130 marks, find the number of questions he answered correctly.

Let the number of correct answers be x

Divide by 5 on both the sides,

Hence, the number of correct answer is 38. 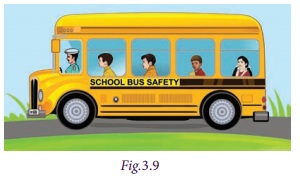 Thus, the number of students got down in the first bus stop is 17.

A cricket team won two matches more than they lost. If they win they get 5 points and for loss − 3 points, how many matches have they played if their total score is 50. 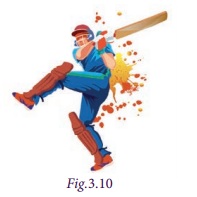 Kandhan and Kavya are friends. Both of them are having some pens.

Kandhan : If you give me one pen, then we will have equal number of pens. Will you?

Kavya : But, if you give me one of your pens, then mine will become twice as yours. Will you?

Construct algebraic equations for this situation. Can you guess and find the actual number of pens, they have?

If Kandhan gives 1 pen to Kavya, Kavya will become twice as Kandhan.