Addition and Subtraction of Algebraic expressions

Addition and Subtraction of Algebraic expressions

Now we see that even though 3 persons are involved with 3 unknown quantities, we make use of one variable, since all the three variables are related.

Let that one variable be x which represents the number of beads that Kannan has.

Kavitha has 3 beads more than Kannan and Aravind have together. So, the number of beads that Kavitha has is given by x+x+20+3.

If Kavitha has 3 beads more than what Kannan and Aravind have together, then find the number of beads that Kavitha has.

In the given algebraic expression, x,y,z are the variables.

For adding or subtracting algebraic expressions, we can write the like terms one after the other horizontally by using brackets or one below the other vertically.

What will you get if twice a number is subtracted from thrice the same number?

Mani and his friend Mohamed went to a hotel for dinner. Mani had 2 idlies and 2 dosas whereas Mohamed had 4 idlies and 1 dosa. If the price of each idly and dosa is x and y respectively, then find the bill amount in x and y. 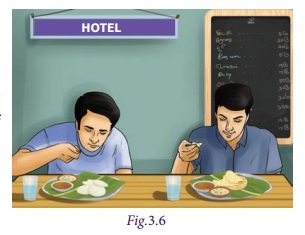 The amount earned on the first day is ₹ 200.

Here is a magic number trick that you can perform using Algebra.

Everyone will end up with the same result 4 irrespective of the number they think. Play this number game with your friends and surprise them. We generalized the pattern in the final column using algebraic expressions. Observe the same and create your own number game and verify whether it works for any number by finding the general term.