When to Use the Active Voice

At least during your undergraduate studies, the nature of your writing assignments generally favors the active voice, because you usually write about general interest topics to educated laypeople and other scientists or engineers in a reader-friendly fashion. In general, a sentence that opens with a concrete simple subject followed by an active verb will serve you well; the rest of the sentence can reveal the new (and often necessarily wordy) information.

Two common circumstances follow where passive voice is too often used, even though active voice is completely practical:

Generally, use active voice in the topic sentences and the opening sentences of paragraphs—that way the topic for the paragraph is clearly announced:

When referring to another author’s work or introducing a figure or table, it is often stylish and interpretive to put the author’s name or the figure or table right into the subject of the sentence, then follow it with an active and literally correct verb:

Feldman explains how the relative brightness of objects depends on the viewer’s angle of observation.

Figure 2 illustrates how fractal geometry can be used to create realistic landscapes.

The following excerpt from a meteorology paper demonstrates how admirable and efficient the active voice can be. This paragraph is especially impressive in that it explains the complex concept of vortices through an analysis of the seemingly ordinary phenomenon of smoke rings. Note the consistent use of simple exact subjects followed by active descriptive verbs.

Figure 4 depicts a smoke ring in which the layers of a toroidal vortex ring are visible. As the picture shows, the smoke ring moves away from its source and trails smoke from its center. The trail of smoke behind the moving smoke ring indicates that the same viscous stress that caused the smoke ring to form also causes its eventual destruction. As the smoke ring continues to move (Figure 5), the outside boundary of the ring rotates toward the same direction as the relative motion of the surrounding air. The inside boundary rotates opposite in direction, and thus the change in relative velocity with distance across the boundary produces drag.

Clearly, this is a paragraph that the writer toiled over, yet, thanks to the clear transitions and sensible use of the active voice, it is highly readable and efficient. This writer understood well how to marshal active verbs to explain phenomena. Note how, thanks to the active verbs, we can readily picture the described phenomena even without the figures being supplied.

One cautionary note, though: even though you are generally allowed to use “I” (or “we”) in papers written largely in the active voice, you must beware of overuse. Simple transition words can represent the writer’s thinking just as well as the use of “I.” For instance, the word “apparently” can do the same job as “I believe that”; the word “however” is much better than “as I turn to another way of thinking about it.” Also, using “I” can be distracting, especially because it might cause you to inject too much personal opinion or irrelevant subjectivity—technical papers are not the place to share digressive speculations or assert your personality. Remember that your focus is on information and your considered interpretation of that information. Strong interpretive verbs and confident, accurate pronouncements automatically suggest that an “I” is at work anyway, so concentrate on choosing simple transitions, concrete nouns, and muscular verbs.

What is passive voice?

In English, all sentences are in either "active" or "passive" voice:

Passive: The uncertainty principle was formulated by Werner Heisenberg in 1927.

In an active sentence, the person or thing responsible for the action in the sentence comes first. In a passive sentence, the person or thing acted on comes first, and the actor is added at the end, introduced with the preposition "by." The passive form of the verb is signaled by a form of "to be": in the sentence above, "was formulated" is in passive voice while "formulated" is in active.

In a passive sentence, we often omit the actor completely:

The uncertainty principle was formulated in 1927.

When do I use passive voice?

In some sentences, passive voice can be perfectly acceptable. You might use it in the following cases:

The cave paintings of Lascaux were made in the Upper Old Stone Age. [We don't know who made them.]

An experimental solar power plant will be built in the Australian desert. [We are not interested in who is building it.]

Mistakes were made. [Common in bureaucratic writing!]

Rules are made to be broken. [By whomever, whenever.]

You want to emphasize the person or thing acted on. For example, it may be your main topic:

Insulin was first discovered in 1921 by researchers at the University of Toronto. It is still the only treatment available for diabetes.

You are writing in a scientific genre that traditionally relies on passive voice. Passive voice is often preferred in lab reports and scientific research papers, most notably in the Materials and Methods section:

The sodium hydroxide was dissolved in water. This solution was then titrated with hydrochloric acid.

In these sentences you can count on your reader to know that you are the one who did the dissolving and the titrating. The passive voice places the emphasis on your experiment rather than on you.

Note: Over the past several years, there has been a movement within many science disciplines away from passive voice. Scientists often now prefer active voice in most parts of their published reports, even occasionally using the subject "we" in the Materials and Methods section. Check with your instructor or TA whether you can use the first person "I" or "we" in your lab reports to help avoid the passive.

When should I avoid passive voice?

Passive sentences can get you into trouble in academic writing because they can be vague about who is responsible for the action:

Both Othello and Iago desire Desdemona. She is courted. [Who courts Desdemona? Othello? Iago? Both of them?]

Academic writing often focuses on differences between the ideas of different researchers, or between your own ideas and those of the researchers you are discussing. Too many passive sentences can create confusion:

Research has been done to discredit this theory. [Who did the research? You? Your professor? Another author?]

Some students use passive sentences to hide holes in their research:

The telephone was invented in the nineteenth century. [I couldn't find out who invented the telephone!]

Since the car was being driven by Michael at the time of the accident, the damages should be paid for by him.

Passive voice for all tenses rules:

The places of subject and object in sentence are inter-changed in passive voice.

3rd form of verb (past participle) will be used only (as main verb) in passive voice.

Auxiliary verbs for each tense are given below in the table.

I am writing a letter       A letter is beingwritten by me.

Am I writing a letter?     Isa letterbeingwritten by me?

Auxiliary verb in passive voice: has been/have been

She has finished his work        Her work has beenfinished by her.

She has not finished her work.          Her work has not beenfinished by her.

Has she finished her work?     Hasher work beenfinished by her?

Auxiliary verb in passive voice: was being/were being

Was he driving a car?    Was a car being driven by him?

Auxiliary verb in passive voice: had been

Auxiliary verb in passive voice: will have been

Note: The following tenses cannot be changed into passive voice. 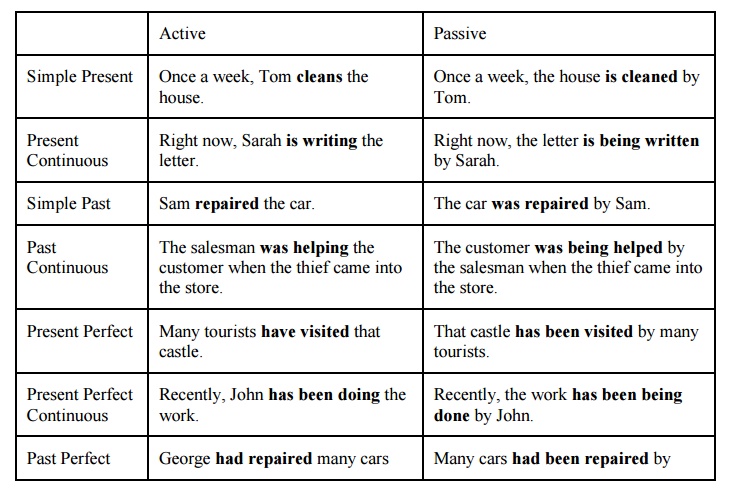 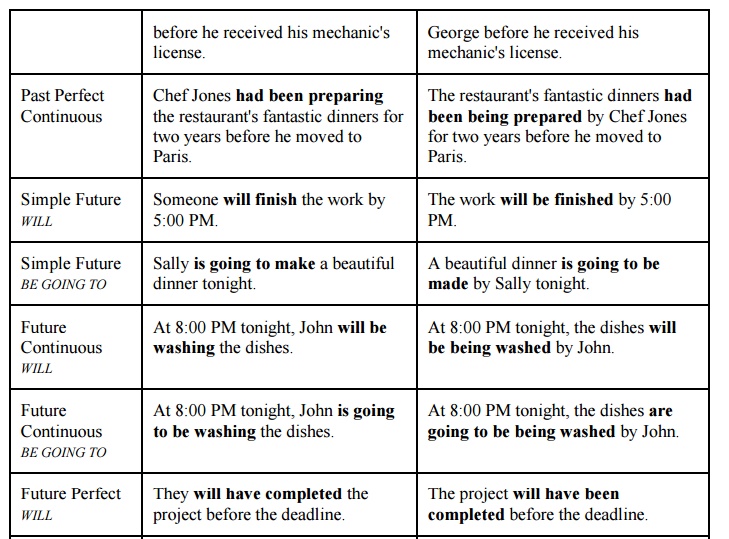 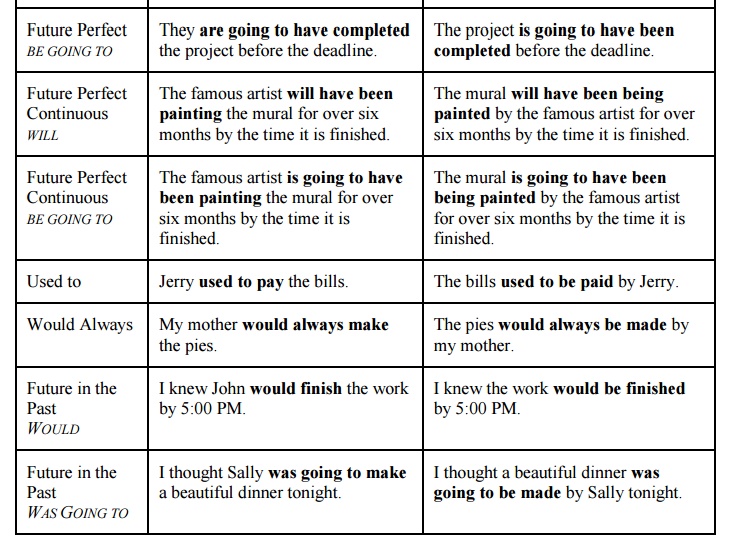 At dinner, six shrimp were eaten by Harry. (Passive)

The savannah is roamed by beautiful giraffes. (Passive)

The flat tire was changed by Sue. (Passive)

We are going to watch a movie tonight. (Active)

A movie is going to be watched by us tonight. (Passive)

I ran the obstacle course in record time. (Active)

The obstacle course was run by me in record time. (Passive)

The crew paved the entire stretch of highway. (Active)

The entire stretch of highway was paved by the crew. (Passive)

Mom read the novel in one day. (Active)

The novel was read by Mom in one day. (Passive)

A scathing review was written by the critic. (Passive)

I will clean the house every Saturday. (Active)

The house will be cleaned by me every Saturday. (Passive)

The staff is required to watch a safety video every year. (Active)

A safety video will be watched by the staff every year. (Passive)

She faxed her application for a new job. (Active)

The application for a new job was faxed by her. (Passive)

The entire house was painted by Tom. (Passive)

The students’ questions are always answered by the teacher. (Passive)

That piece is really enjoyed by the choir. (Passive)

Who taught you to ski? (Active)

By whom were you taught to ski? (Passive)

The whole suburb was destroyed by the forest fire. (Passive)

The two kings are signing the treaty. (Active)

The treaty is being signed by the two kings. (Passive)

The cleaning crew vacuums and dusts the office every night. (Active)

Every night the office is vacuumed and dusted by the cleaning crew. (Passive)

Money was generously donated to the homeless shelter by Larry. (Passive)

No one responded to my sales ad. (Active)

My sales ad was not responded to by anyone. (Passive)

The wedding planner is making all the reservations. (Active)

All the reservations will be made by the wedding planner. (Passive)

For the bake sale, two dozen cookies will be baked by Susan. (Passive)

The comet was viewed by the science class. (Passive)

The video was posted on Face book by Alex. (Passive)

The director will give you instructions. (Active)

Instructions will be given to you by the director. (Passive)

Thousands of tourists view the Grand Canyon every year. (Active)

The Grand Canyon is viewed by thousands of tourists every year. (Passive)

The homeowners remodeled the house to help it sell. (Active)

The house was remodeled by the homeowners to help it sell. (Passive)

The team will celebrate their victory tomorrow. (Active)

The victory will be celebrated by the team tomorrow. (Passive)

The metal beams were eventually corroded by the saltwater. (Passive)

The kangaroo carried her baby in her pouch. (Active)

The baby was carried by the kangaroo in her pouch. (Passive)

Sugar cane is raised by some people in Hawaii. (Passive)