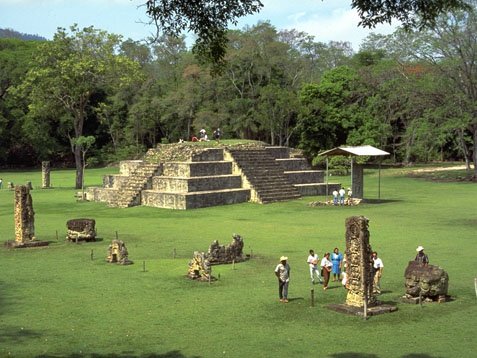 We climbed into the plane and started off. The mist had all melted away and, in a little while, there below us, clear as a map, was the valley of Copan, narrow between hills, with its village, its fields of dust-colored stubble, its winding river, its tree-grown Maya acropolis rising sheer in a great wall from the water's edge.

We climbed into the plane and started off. The mist had all melted away and, in a little while, there below us, clear as a map, was the valley of Copan, narrow between hills, with its village, its fields of dust-colored stubble, its winding river, its tree-grown Maya acropolis rising sheer in a great wall from the water's edge. We came spiraling down. A small bald patch not far from the ruins was evidently the landing field. A herd of cows scattered in hysterical agitation as we descended. Avoiding these animals as best he could, and steering clear of the larger of the numerous rocks with which the airport was strewn, our pilot, who was fortunately a most skillful flyer, brought us safely to land. We stepped out and, accompanied by some small boys who offered to be our guides, walked off to see the ruins. Our pilot took the road to the village; the local authorities would be anxious, he knew, to prove their importance by lengthily examining his paper. If he did not indulge them, they might turn savage.

Time and its allies in destruction, vegetation and weather, play curious tricks on the works of man. A city left to their tender mercies is generally destroyed as an architectural and engineering whole, but spared in its decorative details. The great masses of masonry are buried and disrupted; tend, if the vegetation is strong, to vanish altogether, dissolved into their component parts; the statues, the reliefs, the fragile pots and jewels survive, very often, almost intact. At Copan, for example, a few mounds covered with trees, a wall here and there, some rubbish heaps of tumbled stones, are all that remain of the great complex of pyramids, of platforms, of walls and terraces, of sunken courtyards, which once occupied the site. Buried and, under the mold, disintegrated by the thrusting roots of the tropical vegetation, a sacred city of pure geometrical forms once stood here. Its sharp-edged planes of hewn stone, of white or painted stucco, shone smooth, like the surfaces of a crystal, in the perpendicular sunlight. But toiling up and down through the scrub, among the fallen stones, I found it all but impossible to reconstruct in my imagination the Mayas' huge embodiment of a mathematician's dream. I had read the writings of the archeologists and knew what sort of monument had been raised at Copan. But these almost shapeless barrows supplied my fancy with no visible foundations on which to rebuild the Mayas' prodigious works. Only the plastic decorations with which their mountains of solid geometry had been incidentally trimmed were still there, in unequivocal existence, before my eyes. The whole had gone; but a few of the ornamental parts remained. In a maize field at the foot of the wooded mounds - the mounds were the acropolis and principal pyramid, the maize field had been a great forum - stood a group of magnificent stelae, floridly carved in such deep relief that the stone was sometimes pierced from side to side. Using neolithic tools, the Maya sculptors had displayed an almost contemptuous mastery of their material; they had treated their twenty-foot monoliths as a Chinese craftsman might treat a piece of ivory. One is left bewildered by the spectacle of so much technical accomplishment displayed by people having such inadequate technical resources.

The stelae are not Copan's only monuments. Scrambling among the ruins, we found an astonishing wealth of carved stones. Here was a great cubic skull-symbol, its eye sockets glaring, its teeth deep in the grass and weeds; here, at the base of a broken wall, a dado of small death's heads in low relief; here the famous altar with its frieze of fantastically adorned astronomer-priests in scientific conference; here, carved in the round, a giant's head, grotesquely open-mouthed; here a pair of statues, broken, but still violently alive. The finest specimens of sculpture in the round are no longer at Copan. I saw nothing to compare in grace, in plastic subtlety, in emotional expressiveness, with the torso of the maize god at the British Museum, or with the lovely head of the same god now at Boston. These two pieces and certain others in American museums, are stylistically so close to one another that one is tempted to think of them as the works of a single sculptor of outstanding ability. Of the other carvings in the round still at Copan, none exhibited the kind of approach to reality exemplified in these extraordinary statues. The beauty of most Mayan sculpture is felt by us to be profoundly, incommensurably alien. But with this particular group of carvings from Copan one feels suddenly at home, on familiar emotional ground. The mind of the man, or men, who made them seems to have been gifted with the same kind of sensibilities as ours. Now that these works have been taken away, the European visitor at Copan enjoys no such comforting conviction. He looks at the astonishing works around him, but looks at them from across a gulf; they exist in a universe of sentiment and discourse that is not his universe. Those colossal skulls, for example - they have nothing to do with the macabre of our later middle ages, or the florid horrors of baroque sepulchral art.

The flesh is bruckle, the fiend is slee

So wailed our ancestors. But I doubt if the Mayas were saying anything of the kind. In these great cubic monoliths, adorned (with what an unerring sense of the significantly decorative effect!) with eye sockets, nose hole, teeth, one finds no trace of our European lament for transience, our personal terror of extinction and decay. One finds - what? Confronted by the extraordinary objects themselves one can only ask the question, not hope to answer it. It is impossible to know by personal experience what the people who made such things felt and thought. Each life has its own private logic, and the logics of all the lives of people living at a given time, under a given cultural dispensation, have, at some point, a certain resemblance among themselves. The Mayas' life-logic was not the same as ours. The admiration with which we look at their works of art is tinged with a speculative incomprehension. What were they really up to? Quien sabe?

(From Beyond the Mexique Bay)