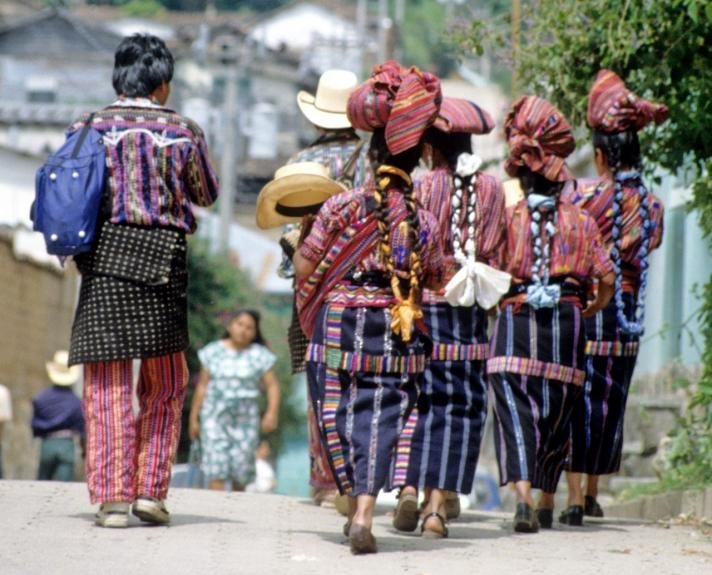 The market at Solol� was a walking museum of fancy dress. Unlike the Indians of Mexico, who have mostly gone into white cotton pajamas, with a blanket slung over the shoulder in lieu of great-coat, the Guatemaltecos of the highlands have kept their old costumes.

The market at Solol was a walking museum of fancy dress. Unlike the Indians of Mexico, who have mostly gone into white cotton pajamas, with a blanket slung over the shoulder in lieu of great-coat, the Guatemaltecos of the highlands have kept their old costumes. This conservatism has been to some extent affected by the slump and the persuasive salesmanship of shopkeepers and commercial travelers. Nobody starves in this self-supporting agricultural community; but money is a great deal scarcer than it was a few years ago, when the coffee fincas were in full production and called, during the picking season, for whole armies of workers from the hills. Those were the glorious times when a man could earn as much as twenty-five or thirty cents a day. The Quich villages were rich: their fiestas were grand events and the more elaborate of their old dances were staged on a lavish scale; aguardiente flowed like water, and when a man needed a new suit of the traditional clothes he could afford to buy the hand-woven cloth, the richly patterned sashes and kerchiefs, the hat bands and tassels. Today he has to think twice and three times before he renews his wardrobe. A new outfit will cost him the equivalent of four or five pounds, and at the present moment this is, for a Quich Indian, an enormous sum. At the local store the price of a suit of blue dungarees is only a few shillings, and when it is worn out, which it will be very soon, he will be able to afford to buy another. It looks, I am afraid, as though the traditional dress of the Indians were doomed. All the forces of industrialism are arrayed against it. Conservative prejudice cannot long resist the assaults of economics.

Meanwhile a majority of highlanders still wear the old costumes - a different one in every village. The most curious feature, for example, of the Solol costume is the black varnished hat, which is a strangely flattened version of John Bull's topper. From another village (I never discovered which; but it cannot have been far from Solol, for I saw several of its representatives at the market) came men in large mushroom-shaped hats, exactly like those worn by very distinguished old English ladies when they go gardening. I had a slight shock each time I saw one of them. It was as though Miss Jekyll had suddenly gone mad and taken to staining her face with walnut juice and wearing, with her old hat, a gray monkey-jacket and white cotton pants.

The most remarkable thing about these Indian costumes is that they are not Indian at all, but old European. Little scraps of seventeenth- and eighteenth-century Spain have been caught here and miraculously preserved, like flies in the hard amber of primitive conservatism. The Chichicastenango Indians, for example, wear a short-waisted embroidered jacket and knee-breeches of brown cloth, a gay woven sash and an embroidered kerchief tied round the head. It is, almost without modification, the costume of Sancho Panza. Elsewhere one finds a number of small variations on the Spanish theme. Thus, long kilts will sometimes be worn below a neatly tailored bullfighter's jacket - a reminiscence, perhaps, of the loin-cloths of an earlier dispensation.

The women's dress has been much less profoundly affected by Spanish fashion than the men's. There is no sign here of the long trailing skirts and Lancashire-lassie shawls of the Mexicans. The Filipino lady's low-cut corsage and puffed sleeves, her white petticoat and coquettishly looped-up skirt are unheard of. True, the Quich women's embroidered bodices may have borrowed something from European peasant costume; but their short skirts, reaching in many cases only to the knee - these are unquestionably Indian. Perhaps their color has changed since the conquest; for they are now dyed with indigo which was introduced by the Spaniards. But the cut is surely the same as it was when Alvarado passed this way.