You Are Not Your Khakis 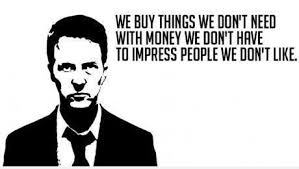 Back To The Future

I came home one day and it was all gone.

Where did all of my stuff go? He would have thought.

I worked so hard to buy all of that stuff, and now it's all gone!

My 28 year-old self would have panicked when he noticed that over 90% of his stuff was no longer there. It was gone. Vanished. Poof! He had given so much meaning to that stuff-the car, the clothes, the gadgets, the trappings of a consumer culture that he was a part of-but that stuff didn't have any real meaning.

He was part of the disease, not the cure.

There were so many lessons he learned in those two years…

Most of us know that Tyler Durden quote about how you are not your khakis, right? Well, suffice it to say, many of my learned lessons were similar to that quote.

I am so much more. I am who I am on the inside. I do amazing things, yet I am imperfect. I accomplish incredible feats, yet I make mistakes. I am a caring person, yet I forget about important things from time to time. I am proud of who I am as a person, yet I make bad decisions sometimes. I am a human being, a mixed bag. I am just like you.

And this is what I learned…

Stuff is just stuff. It can be replaced. You cannot. Stuff is not important. There are plenty of things that are important in life. Stuff is not on that list.

Important things in my life include my health, my relationships with other people, pursuing my passions, growing as an individual, and, most importantly, contributing to other people in a meaningful way.

You can not purchase a meaningful life. You can only live it, one day at a time.

Donating 90% of My Stuff: Baby Steps

But I wasn't robbed. It didn't happen over night. I didn't wake up one day and get rid of the vast majority of my stuff.

It started with a pair of khakis that I didn't wear, grew into an entire basement of clothes that no longer fit, and expanded from there, one item at a time.

Once I got rid of one thing, I started questioning other things in my life.

I started asking myself better questions to get to the root of why I had all this stuff that I didn't need (or even want most of the time).

Why did I buy this?

What could I have used that money for instead? Do I really need this?

What would happen if I didn't have this anymore? Could I replace this if I really needed to?

Can someone else use this more than I can?

I kept questioning my possessions and started getting rid of more and more stuff. A carload of clothes here, a piece of furniture there, one thing at a time, donating the majority of it. And then…

I came home one day last week, walked in, and realized that I didn't own much stuff anymore. I realized I could have less stuff and still be happy, still live a meaningful life.

A Certain Kind Of Prison

It's important to note that I don't think physical possessions are inherently evil or wrong or pernicious. I just think we give too much meaning to our stuff, stuff that doesn't really

matter at all. Every dollar we spend on stuff is a dollar we have to work for, which takes our time away from us. Our precious time. Our time is our freedom. Thus our stuff has the potential to rob us of our freedom.

So maybe I was robbed. Robbed by my stuff. Robbed of my freedom.

No more though. I am in control now. I am aware that I am not my stuff.

English essay writing topics, sample examples for school, college students and Competitions.
Coexistence with Nature
Contribution : Establishing Deeper Connections with People
You Are Not Your Khakis
30 Is Not the New 20
When Tempers Flare
Pride in Profession
When I Grow Up
A Quest for Earth-friendly Development
Who Understands Him Best?
My Story of Inspiration
From the Stone to the Heart
Growth Through Minimalism
My Story of Inspiration
Plant for Planet
The Drought City
Never Leave the Scene of a Good Idea without Taking Action
Killing Time: Over Time I Got Rid of Time
Living in the Moment : Be On the Mountain
Stop Trying
Emotional Health : On Happiness
Stop Living the Lie; Start Living the Life
Why I Don't Own a TV
A Bright Spark
Growth : Minimalism Scares the Shit Out of Me
A Real Life Nightmare That Woke Up My Consciousness