The normal pH of biological fluid is maintained in a narrow range.

The normal pH of biological fluid is maintained in a narrow range. For example, the pH of the blood is maintained between 7.35-7.40, i.e. slightly alkaline. The changes in pH range will affect metabolic functions e.g. denaturation of proteins, enzyme activity etc. Thus, maintenance of pH is vital for normal physiological and biochemical functions of the body. The change of pH is due to the change of acid-base concentrations in the cell and biological fluids. Hence, the control and maintenance of acid-base balance is essential for the maintenance of pH.

The acid-base balance in the body is maintained by buffer system along with the functions of lungs and kidney. 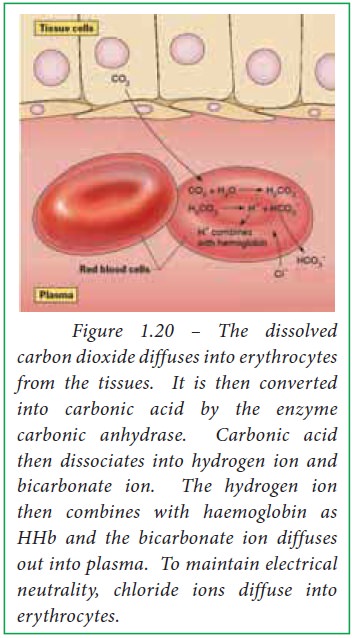 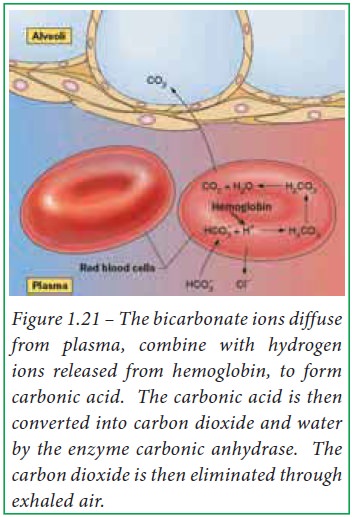 The kidney maintains pH by excreting either acidic or basic urine. Excretion of acidic urine increases pH whereas basic urine excretion decreases pH in extracellular fluid. Large amount of H+ ions are secreted into the tubular lumen by tubular epithelial cells. If they are removed in urine, they will increase the pH of extracellular fluid. Large amount of bicarbonate ions are also continuously secreted in the renal tubules. If they are excreted in urine, then they reduce pH by retaining H+ ions. If more hydrogen ions are removed than bicarbonate ions, then there will be a net loss of acid, whereas, if more bicarbonate ions are filtered than hydrogen ions are secreted, then there will be a net loss of base. These functions are achieved by mainly three components, namely, bicarbonate buffer system, phosphate buffer system and ammonia. The role of these components are as follows: 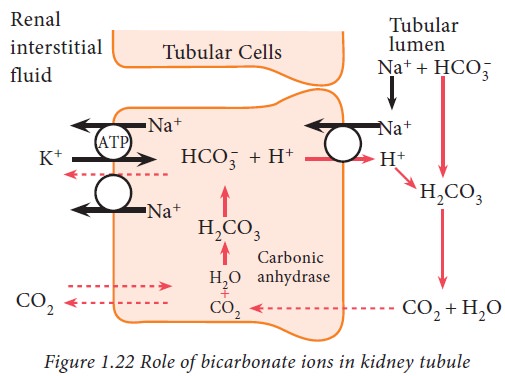 The bicarbonate ions, freely filtered through glomerulus, combine with hydrogen ions and form carbonic acid which, in turn, dissociates into carbon dioxide and water. The carbon dioxide then diffuses into tubular cells where it again combines with water to form carbonic acid in the presence of carbonic anhydrase. Thus, bicarbonate and hydrogen ions are reabsorbed and retained. This pattern of H+ ion secretion occurs in proximal convoluted tubule, ascending loop of Henle and early part of distal convoluted tubule.

After the absorption of available bicarbonate ions in tubular filtrate, remaining hydrogen ions interact with HPO24- or NaHPO –4 and form H2PO4– or NaH2PO4 which can be excreted in urine. Thus, hydrogen ions are removed from extracellular fluid. 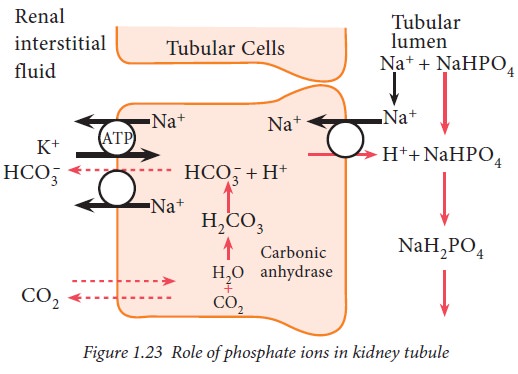 Ammonia produced from glutamine in tubular epithelial cells, can freely diffuse into tubular lumen. This ammonia then combines with hydrogen ions to form ammonium ions which can be easily excreted in urine. Thus, hydrogen ions are removed from extracellular fluid. 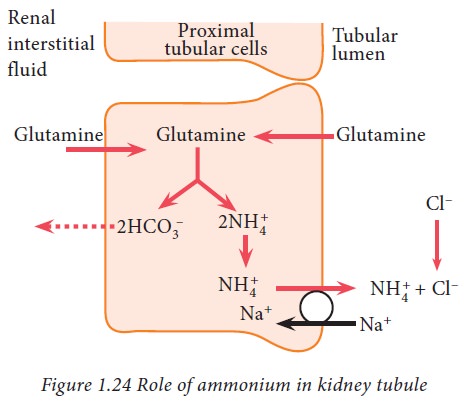