All parts of the body require nutrients and the metabolic wastes produced in them need to be removed from the body.

All parts of the body require nutrients and the metabolic wastes produced in them need to be removed from the body. Hence, there is a need to transport various substances like digested food materials, hormones, catabolites, enzymes, various gases from one part of the body to another. These movements are achieved through body fluids. In addition to this, body fluids also provide the medium for the occurrence of metabolic reactions. Water is major component of body fluids. Water is present within and around the cells of the body, and within all the blood vessels. The total body water (TBW) is approximately 60% of body weight. 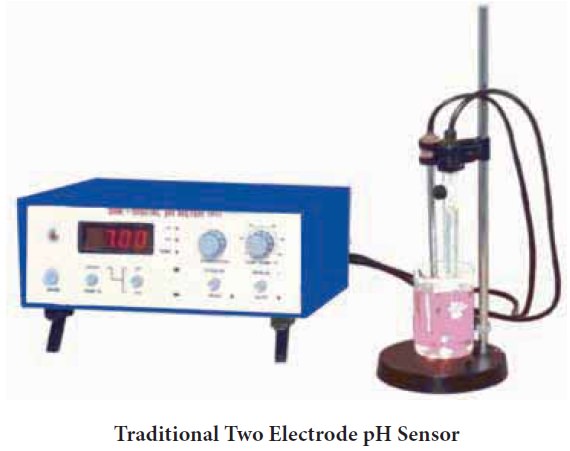 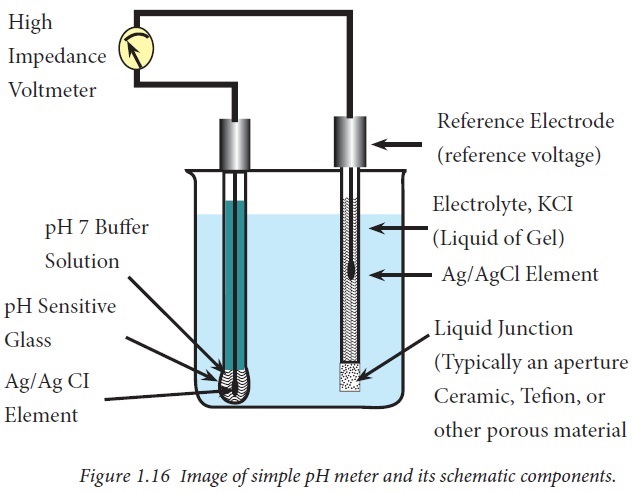 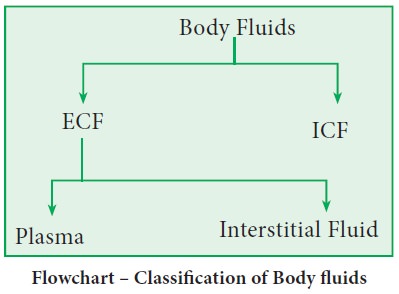 Collectively, the fluid present in the blood and in the spaces surrounding cells is called extracellular fluid (ECF), that is, all the fluid that is outside of cells. The ECF is one thirds of TBW i.e. 20% of body weight. The major cation is Na+. The major anions are Cl– and HCO3–. The ECF is comprised of plasma (1/4th of ECF) and interstitial fluid (3/4th of ECF).

The cavities of the brain (ventricles), the spinal cord and subarachnoid region is filled with CSF. The total volume of CSF is 100 – 150 ml. It is a clear, transparent and colorless fluid. It has similar pH as that of blood (7.20 to 7.40 i.e. slightly alkaline). It protects the brain and spinal cord from shocks and maintains a uniform pressure on the nervous structures. It acts as a reservoir to regulate the contents of the cranium. To a limited extent, it acts as a medium for nutrient exchange in the nervous system. 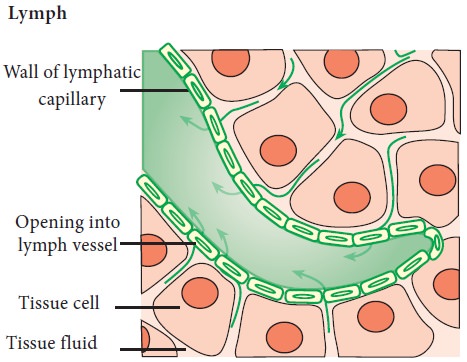 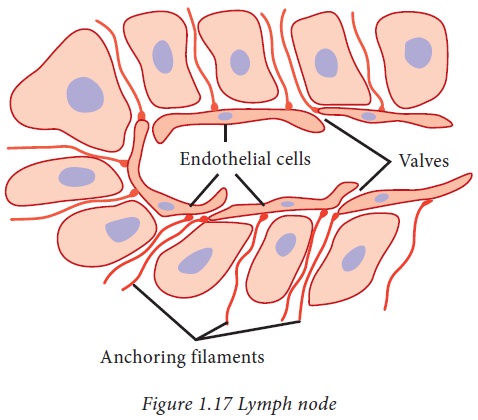 Formation and flow of lymph and interstitial fluid

The fluid present in the lymphatic system is called lymph. Lymph is a colorless fluid. It is composed of fluid matrix, plasma and leucocytes. It bathes tissues and organs in its protective covering. There are no erythrocytes in lymph and it has lower protein content than blood. Its pH is as same as that of blood (7.35 to 7.40 i.e. slightly alkaline).

When the blood passes through the capillaries in tissues, some water, along with many small water-soluble substances, move out into the spaces between the cells. Larger proteins and most of the formed elements are left in the blood vessels. This fluid is called the interstitial fluid or tissue fluid. Exchange of nutrients, gases, etc. between the blood and the cells always occur through this fluid. There is an elaborate network of vessels called the lymphatic system. The lymphatic system collects this lymph fluid and drains it back to the major veins such as thoracic duct and subclavian vein.

Fats are absorbed through lymph in the lacteals present in the intestinal villi. Lymph drains fluid from extracellular or intercellular spaces into blood. It is used to maintain a balance between blood and interstitial fluid.

Blood functions as a vehicle for mass transport of materials between cells and the environment or between the cells themselves for maintaining homeostasis. Blood consists of cellular portion called as formed elements (cells) that are suspended and carried in a fluid portion called plasma. The total blood volume in an adult is about 5 litres. The normal pH range of the blood is 7.35 – 7.40.

When a blood sample is centrifuged, the heavier formed elements are packed at the bottom of the centrifuge tube, leaving plasma at the top. The formed elements constitute 45% of total blood volume and the plasma accounts for the remaining 55%. 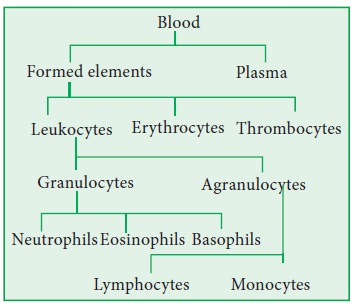 Leukocytes include granulocytes (neutrophils, eosinophils, basophils) and agranulocytes (lymphocytes and monocytes). The normal platelet count in the blood is between 150000 and 300000 cells per cubic millimeter.

Plasma is a pale-yellow coloured liquid consisting of water and dissolved solutes. The solutes include ions like Na+ as well as organic molecules such as metabolites, hormones, enzymes, albumins, globulins, fibrinogen and other proteins.

a.  Blood transports oxygen from lungs to the tissues and carbon dioxide from tissues to the lungs.

b.  It transports absorbed nutrients from digestive tract to all the body tissues.

c.   It transports metabolic waste materials to kidney, lungs, skin and intestine for their removal.

f.    It maintains acid-base balance in the body.

g.  It provides defense against various infections through leukocytes and antibodies. 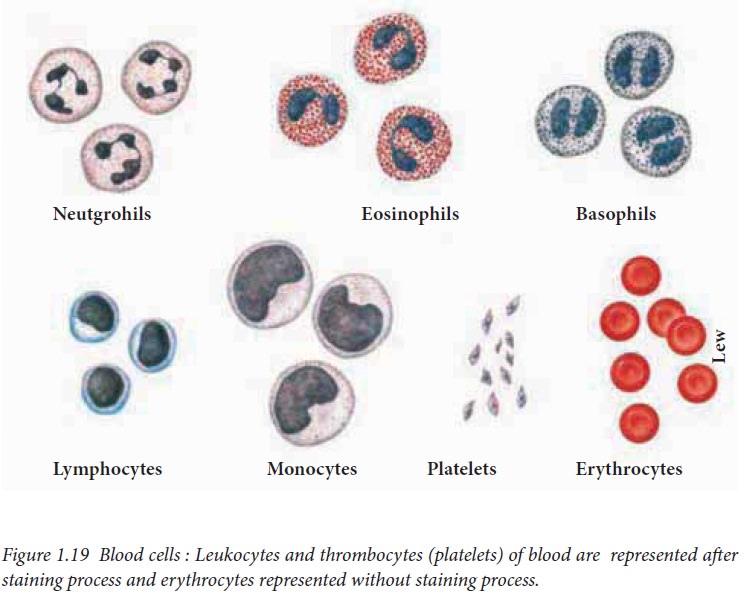 The pH of important biological fluids is presented in the following table (Table 1.3). 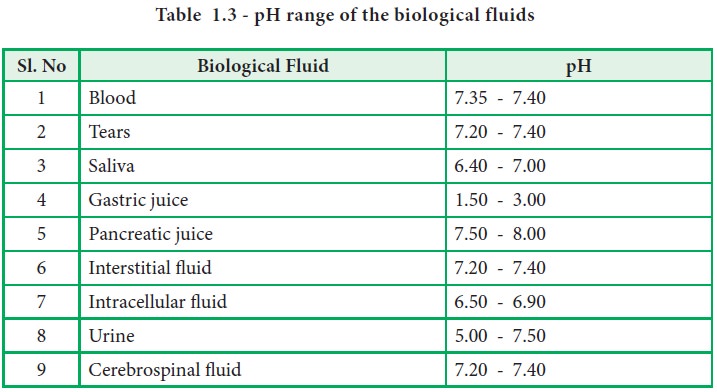 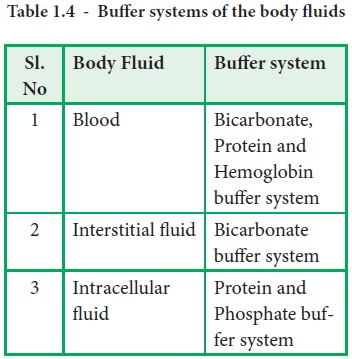 But, phosphate concentration is very low in blood, thus, phosphate buffer, plays a major role as an intracellular buffer in red blood cell and other types of cells where their concentrations are higher than in blood and interstitial fluid. The sodium salts of phosphoric acid also act as buffer system.

Plasma proteins are responsible for protein buffer system. The buffering capacity of proteins depends upon the pKa of ionisable group of aminoacid side chains. Histidine residue plays a vital role as buffering agent because its imidazole group pKa value is 6.7 and it is the more effective contributor for protein buffer system. The plasma proteins are responsible for the 2% buffering capacity of plasma. At blood pH 7.4, proteins exist as anions (Pr–) serving as conjugate base. After accepting H+ ions it is converted into weak acid (HPr). Thus, buffering action of proteins is due to the following dissociation reaction:

Hemoglobin present in erythrocytes also plays an important role as buffering agent. It mainly buffers the acids produced during gaseous transport between lungs and tissues.