A large diversity of isoprenoids has multiple functions in plant metabolism

Isoprenoids are present in all living organisms, but with a remarkable diver-sity in plants. More than 40,000 different plant isoprenoids are known and new compounds are being constantly identified.

A large diversity of isoprenoids has multiple functions in plant metabolism

Isoprenoids are present in all living organisms, but with a remarkable diver-sity in plants. More than 40,000 different plant isoprenoids are known and new compounds are being constantly identified. These isoprenoids have many different functions (Table 17.1). In primary metabolism, they func-tion as membrane constituents, photosynthetic pigments, electron trans-port carriers, growth substances, and plant hormones. They act as glucosyl carriers in glucosylation reactions and are involved in the regulation of cell growth. 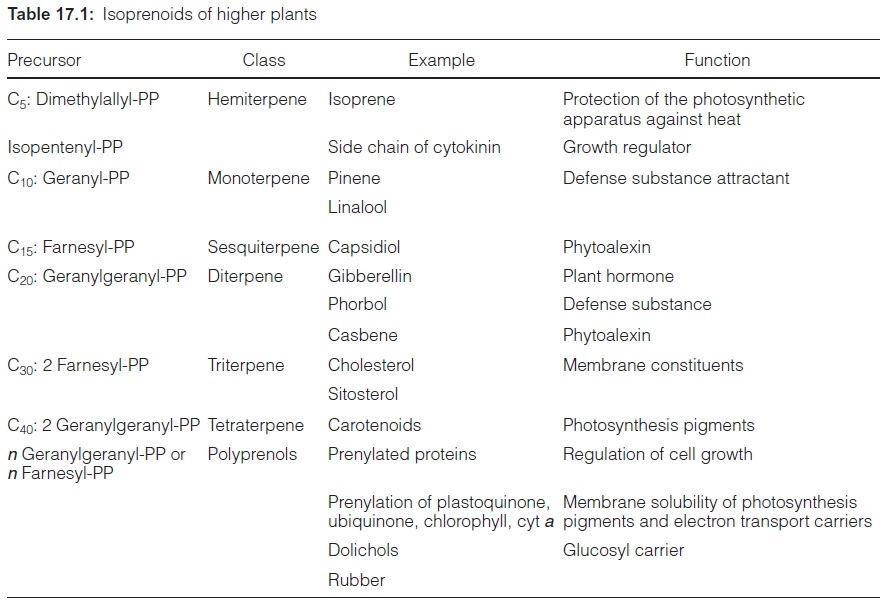 Plant isoprenoids (also known as terpenoids) are important commer-cially, for example as aroma substances for food, beverages, and cosmet-ics, as vitamins (A, D, and E), natural insecticides (e.g., pyrethrin), solvents (e.g., turpentine), and as rubber and gutta-percha. The plant isoprenoids also comprise important natural compounds, which are utilized as pharma-ceuticals or their precursors. Investigations are in progress to increase the ability of plants to synthesize isoprenoids by genetic engineering.

Plant ethereal oils have long been of interest to chemists. A number of mainly cyclic compounds containing 10, 15, 20, or correspondingly more C atoms have been isolated from turpentine oil. Such substances have been found in many plants and were given the collective name terpenes. Figure 17.1 shows some examples of terpenes. Limonene, an aromatic sub-stance from lemon oil, is a terpene with 10 C atoms and is called a monot-erpene. Carotene, with 40 C atoms, is accordingly a tetraterpene. Rubber is a polyterpene with about 1,500 C atoms. It is obtained from the latex of the rubber tree Hevea brasiliensis. 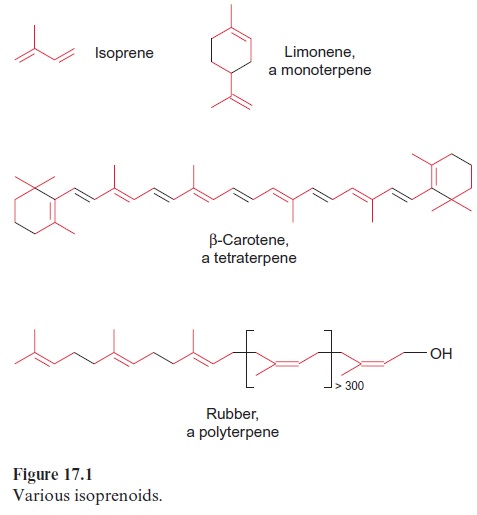 Otto Wallach (Bonn, Göttingen), who in 1910 was awarded the Nobel Prize in Chemistry for his basic studies on terpenes, recognized that iso-prene is the basic constituent of terpenes (Fig. 17.1). Continuing these stud-ies, Leopold Ruzicka (Zürich) found that isoprene is the universal basic element for the synthesis of many natural compounds, including steroids, and for this he was awarded the Nobel Prize in Chemistry in 1939. He pos-tulated the biogenic isoprene rule, according to which all terpenoids (deriv-atives of terpenes) are synthesized via a hypothetical precursor, which he named active isoprene. This speculation was verified by Feodor Lynen in Munich (1964 Nobel Prize in Medicine), when he identified isopentenyl pyrophosphate to be the “active isoprene.”