Generally found on the short arm of the Y chromosome, the coding genesare important for sex determination of males and spermatogenesis.

Y- STRs are present on the Y chromosome (Fig.10). Generally found on the short arm of the Y chromosome, the coding genesare important for sex determination of males and spermatogenesis. These Y-STRs are polymorphic among unrelated males.They are inherited through the paternal line with minute change through several generations. 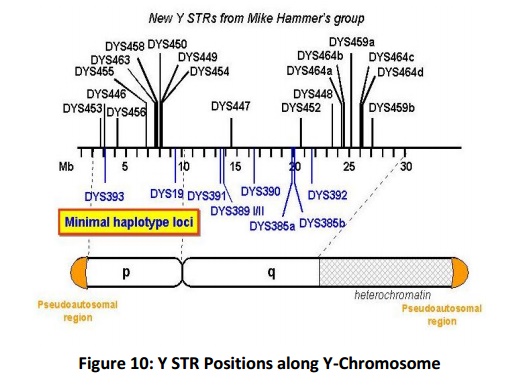 It focuses exclusively on the male DNA present in a particular sample. This technique can completely ignore the presence of female DNA because this technique amplifies definite DNA segments that are positioned only on the Y chromosome.

When the forensic results come back specifying that little male DNA present in the sample collected from crime scene is masked by the abundance of the victim's (female) own DNA then it could be further analyzed with Y-STR typing. In other cases viz. rape cases where sperm quantity is absent due to either a vasectomised rapist or a long duration between the alleged violence and gathering of the rape kit samples or bite mark swabbing procured from a female victim can produce Y-STR profiles even if large amounts of DNA from the female victim herself is present. In gang rapes, where several males may have contributed to the collected samples-STR typing can be helpful. This testing can to knowthe exact no. of males involved in the crime.

There are few disadvantages to this type of testing which are as follows:

Since, all males of a family would have exactly the same Y-STR profile any possible male suspect's Y-STR profile will be matching his father, his brothers, his uncles’ Y-STR profile. Additionally, it can be possible for individuals to have the same common Y-STR profile without being closely related. The advanced available Y-STR kits in use today concentrate upon either 12 or 17 loci on the Y chromosome to solve this issue. If the profiles of different suspects do not match, it is 100% exclusion and then other potential suspects can be focused. If the profiles match, this can be understand that the investigation is in correct direction.

There are plentiful other forensic uses for Y-STR analysis, comprising paternity cases and missing persons cases.

A woman, her child and the accused possible father of her child were profiled using 15 autosomal STR markers. In the child and alleged father, the Y STR profiles were identical. Thus, the result concluded the alleged father being the biological father.

A mother and her two sons were referred to the lab to assess sibling ship. The father was unavailable for testing.Y STR testing with markers demonstrated that the putative sons carry a Y chromosome sharing an identical Y haplotype at all 11 markers used.