Winds are caused by pressure difference between different regions. They carry enormous quantity of energy. Regions in which strong winds prevails for a sufficient time during the year can profitably use wind energy for different purpose.

Winds are caused by pressure difference between different regions. They carry enormous quantity of energy. Regions in which strong winds prevails for a sufficient time during the year can profitably use wind energy for different purpose.

Wind result from air in motion. Air in motion arises from a pressure gradient. On a global basis one primary forcing function causing surface winds from the poles towards the equator, and this low this low density heated air is buoyed up. At the surface it is displaced by cooler more dense higher pressure air flowing from the poles. In the upper atmosphere near the equator the air thus tend to flow back toward the poles and away from the equator. The net result is a global convective circulation with surface winds from north to south in the northern hemisphere.

It is clear that from the above over simplified model that the wind is basically caused by the solar energy irradiating the earth. This is why wind utilization is considered a part of solar technology.

Local winds are caused by two mechanisms. They are

i. The differential heating of land and water. Solar radiation during the day is readily converted to sensible energy of the land surface but is partly absorbed in layer below the water surface and partly consumed in evaporating some of the water. The land mass becomes hotter than the water, which causes the air above the land to heat up and become warmer than the air above water. The warmer lighter air above the land rises, and cooler heavier air above the water moves into replace it. This is the mechanism of shore breezes. At night, the direction o the breezes is reversed because the land mass cools to the sky

ii. The local winds is caused by hills and mountain sides. The air above the slopes heats up during the days and cools down at night, more rapidly than air above the low lands. This causes heated air the day to rise along the slopes and relatively cool heavy air to air to flow down at night.

Wind speed generally changes with height, which requires an equation the predict the wind speed at one height in terms of the measured at another height. Under normal conditions, a wind speed is greater at higher distance above ground. This is largely because the effect of surface features and turbulence diminishes as the height increases. The variability depends on distance from the ground and roughness of the terrain. The most common accepted to describe the vertical variation of wind speed is expressed by a power law having the following form.

Where, v is the wind speed at the required height h, v0 is wind speed at the original height h0, and a is the surface roughness coefficient. The value of the exponent a varies from less than 0.10 over the tops of steep hills to over 0.25 in sheltered locations. The typical value for flat coastal regions is 0.143, which is termed the one-seventh power law. From measurements at different heights the exponent can be determined.

Wind Power – What is it?

All renewable energy (except tidal and geothermal power), ultimately comes from the sun. The earth receives 1.74x1017 watts of power (per hour) from the sun. About one or 2 percent of this energy is converted to wind energy (which is about 50-100 times) more than the energy converted to biomass by all plants on earth.

Differential heating of the earth’s surface and atmosphere induces vertical and horizontal air currents that are affected by the earth’s rotation and contours of the land - > WIND. E.g.: Land Sea Breeze Cycle. Winds are influenced by the ground surface at altitudes up to 100 meters. Wind is slowed by the surface roughness and obstacles.

When dealing with wind energy, we are concerned with surface winds. A wind turbine obtains it power input by converting the force o the wind into a torque (turning force) acting on the rotor blades. The amount of energy which the wind transfers to the rotor depends on the density of the air, the rotor area, and the wind speed.

The kinetic energy of a moving body is proportional to its mass (or weight). The kinetic energy in the wind thus depends on the density of the air, i.e. its mass per unit of volume. In other words, the “heavier” the air, the more energy is received by the turbine at 15oC air weight about 1.225 kg per cubic meter, but the density decrease slightly with increasing humidity.

A typical 600 kW wind turbine has a rotor diameter of 43-44 meters, i.e., a rotor area of some 1,500 square meters. Fig 5.1 shows the power generated by the wind mill with respect to the height. 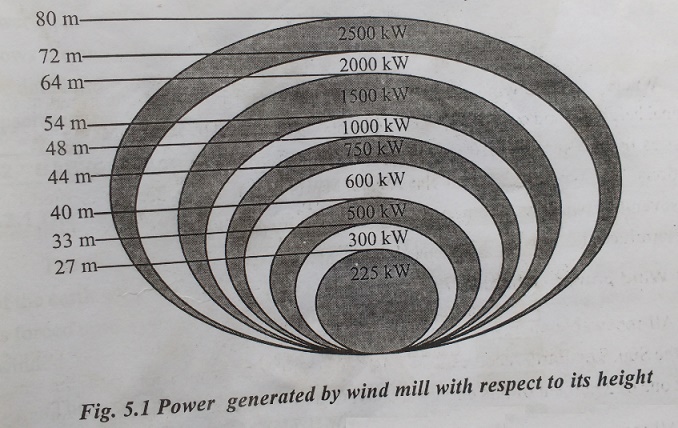 The rotor area determines how much energy a wind turbine is able to harvest from the wind. Since the rotor area increases with the square of the rotor diameter, a tubine which is twice as large will receive 22=2x2 = Four times as much energy. To be considered a good location for wind energy, an area needs to have average annual wind speeds of at least 12 miles per hour.

They have traditionally been measured at a standard height of ten meters where they are found to be 20-25% greater than close to the surface. At a height of 60 metre they may be 30-60% higher because of the reduction in the drag effect of the earth surface. 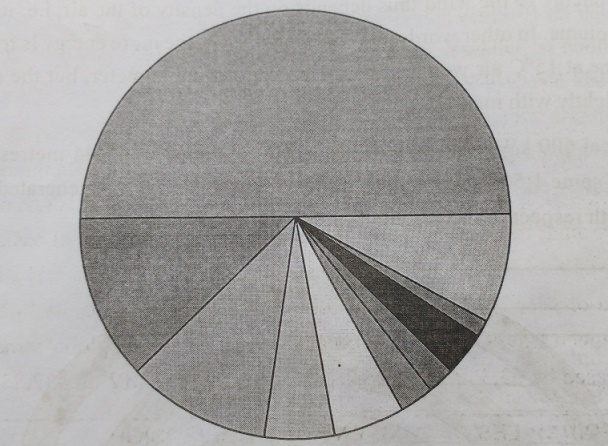 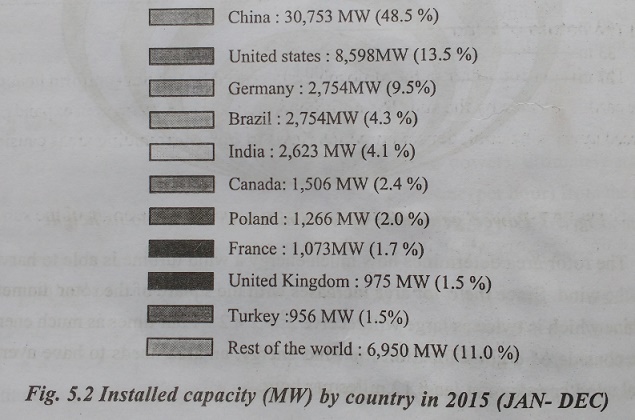 Since, 2010 more than half of all new wind power was added outside of the traditional markets of Europe and North America, nearly driven by the continuing boom in China and India. At the end of 2015, China had 145 GW of wind power installed. In 2015, China installed close to half of the world’s added wind power capacity.