Structure and components of wind mill

The simple structure of horizontal axis wind turbine (wind mill) shown in fig.5.11. The following components are used in a wind mill.

Structure and components of wind mill

The following components are used in a wind mill.

Most turbines have either two or three blades. Wind blowing over the blades causes the blades to “lift” and rotate.

A disc brake, which can be applied mechanically, electrically, or hydraulically to stop the rotor in emergencies. 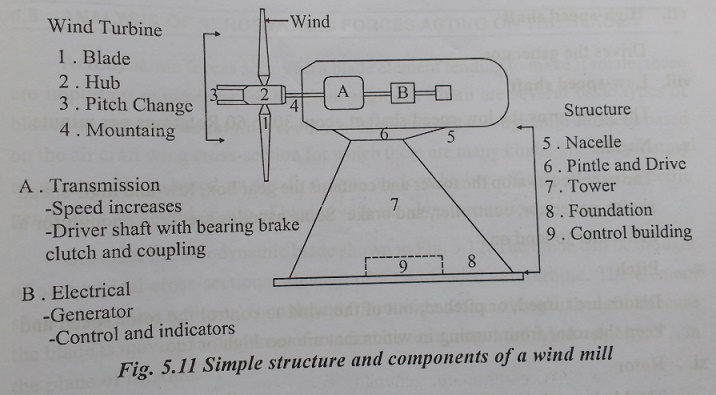 The rotor turns the low-speed shaft 30 to 60 rotations per minute.

The nacelle sits the lower and contains the gear box, low-and high-speed shafts, generator, controller, and brake. Some nacelle are large enough for a helicopter to land on.

Blades are turned, or pitched, out of the wind to control the rotor speed and keep the rotor form turning in winds that are too high or too.

The blades and the hub together are called the rotor.

This is an “upwind” turbine, so called because it operates facing into the wind. Other turbines are designed to run “downwind”, facing away from the wind.

Measure wind direction and communicates with the yaw drive to orient the turbine properly with respect to the wind.