Wind results from air motion. Air in motion arises from a pressure gradient. The circulation of air in the atmosphere is caused by the non-uniform heating of the earth’s surface by the Sun.

2. Why utilization of wind is considered as part of solar technology?

The major forcing function causing surface winds from the poles toward the equator is convective circulation. Solar radiation heats the air near the equator, and this low density heated air is buoyed up. At the surface it is displaced by cooler more dense higher pressure air flowing from the poles. In the upper atmosphere near the equator the air thus tends to low back toward the poles and away from the equator. The net result is a global convective with surface winds from north to south in the northan hemisphere.

It is clear from the above over simplified model that the wind is basically caused by the Solar Energy irradiating the Earth. This is why wind utilization is considered part solar technology.

3. What are the different causes of Local Winds?

Local winds are caused by two mechanisms. They are

i. Differential heating of land and water, and

4. Give the relationship between wind speed and height

Wind speeds increase with height. They have traditionally been measures at a standard height of 10m where they are found to be 20-25% greater than close to the surface. At height of 60m they may be 30-60% higher because of the reduction in the day effect of Earth’s surface.

5. What are the factors determine the output from a wind energy converter:

i. The wind speed,

ii. The cross-section of wind swept by rotor, and

iii. The overall conversion efficiency of the rotor, transmission system and generator or pump.

6. What are the conversion losses available wind energy conversion system.

A 100% efficient aerogenerator would able to convert upto a maximum 60% o the available energy in wind into mechanical energy. Well-designed blades will typically extract 70% of the theoretical maximum, but losses incurred in the gearbox, transmission system and generator or pump could decrease overall wind turbine efficiency to 35% or less.

7. Give the expression for available wind power.

8. Draw the curve a shows the combined effects of wind Speed and Rotor Diameter on wind power generation. 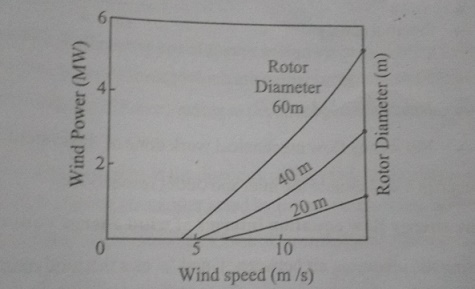 The fraction of the free-flow wind power that can be ectracted by a rotor is a called the power co-efficient. Thus

Where, power available is calculated from the air density, rotor diameter and free wind speed as discussed earlier. The maximum theoretical power coefficient is equal to 16/27 or 0.593. This value cannot be exceeded by a rotor in free-flow wind-stream.

10. What are the advantage o selecting sites with annual mean wind speeds and building larger rather than smaller wind generator?

ii. Doubling the diameter of the turbine’s rotor quadruples the swept area and hence the power output from the device. (This law only applies to horizontal axis machines, for vertical axis machines the changes in power output with diameter will be determined by the geometry of the rotor).

The general energy for steady state flow for unit mass (for a control volume) is: 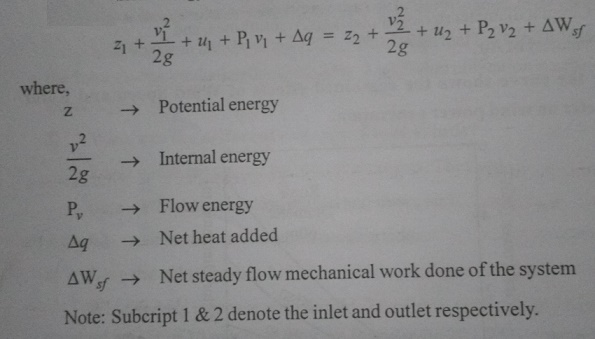 Considering the incoming air between ‘i’ and ‘a’ as a thermodynamic system, and assuming that the air density remains constant (since changes in pressure and temperature are very small compared to ambient), that the potential energy is zero, and no heat or work are added or removed between ‘i’ and ’a’, the general energy equation reduces to the kinetic and low energy-terms. Thus,

13. Write down the condition for maximum power generation in wind conversion system.

The condition for maximum power generation from wind conversion system is given by,

14. Write down the expression or maximum power generated from an ideal wind turbine with horizontal axis.

15. What are the different types o forces acting on propeller type wind turbine.

There are two types of forces which are acting on the blades. They are

(1)  Circumferential force acting in the direction of wheel rotation that provides the torque, and

(2)  Axial force acting in the wind stream that provides an axial thrust that must be countered by proper mechanical design.

16. Write down the expression for Circumferential and Axial Thrust Force. 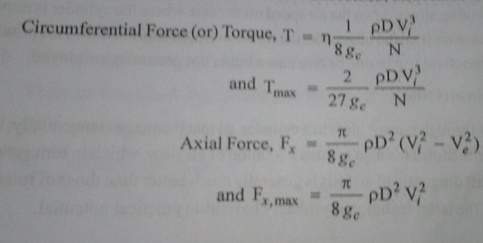 17. What is the function of back-up in small producers?

For small producers, back-up can take the form of

(2)  Connection with the local electricity distribution systems, or

(3)  A stand by generator powered by liquid or gaseous fuels

18. What are the mechanisms for producing forces from wind?

There are two primary mechanism for producing forces from the winds. They are

i. Lift force, and

Lift forces are produced by changing the velocity of the air stream flowing over either side of the lifting surface. Speeding up the air flow causes the pressure to drop, while slowing the air stream down leads to increase in pressure.

This pressure difference produces a force that begins to act on the high pressure side and moves towards the low pressure side of the lifting surface which is called an airfoil.

Magnus Effect, caused by spinning a cylinder in an air stream at a high-speed of rotation. The spinnings slows down the air speed on the side where the cylinder is moving into wind and increases it on the other side; the result is similar to an airfoil. This principle has been put to practical use in one or two cases but is not generally employed.

To blow air through narrow slots in a cylinder, so that it emerges tangentially; this is known as a Thwaits Slot.

Thwaits Slots also creates a rotation (or circulation) of airflow, which in turn generate lift. Because the lift drag ratio of airfoils is generally much better than those of rotating or slotted cylinders, the latter techniques probably have little practical potential.

When lift decreases and the drag increases quite substantially; this phenomenon is known as Stalling. For efficient operation, a wind turbine blade needs to function with as much lift and as little drag as possible because drag dissipates energy.

23. Give some important factor consider for side selection of WECS

3. Availability of wind V(t) Curve at the proposed site:

4. Wind structure at the proposed site:

5. Altitude of the proposed site:

6. Terrain and its aerodynamic:

8. Distance to road or railways:

9. Nearness of site to local centre/users:

24. What are the major broad classification of WECS?

There are two broad classification of WECS. They are

i. Horizontal Axis machines and

25.What are the different types of vertical axis wind turbines.