The Savonius wind turbine is a type of vertical-axis wind turbine invented by the finnish engineer sigurd Savonius in the 1920’s. It is one of the simplest wind turbine designs. It consists of two to three “scoops” that employ a drag action to convert wind energy into torque to drive a turbine. When looked at from above in cross-section, a two scoop Savonius turbine looks like an S-shape. Due to the curvature of the scoops, the turbine encounters less drag when moving against the wind than with it, and this causes the spin in any wind regardless of facing.

A Savonius is a drag type turbine, they are commonly used in cases of high reliability in many things such as ventilation and anemometers. Because they are a drag type turbine they are less efficiency than the common HAWT. Savonius are excellent in areas of turbulent wind and self starting. The schematic diagram of savonius wind turbine as shown in fig.5.10. 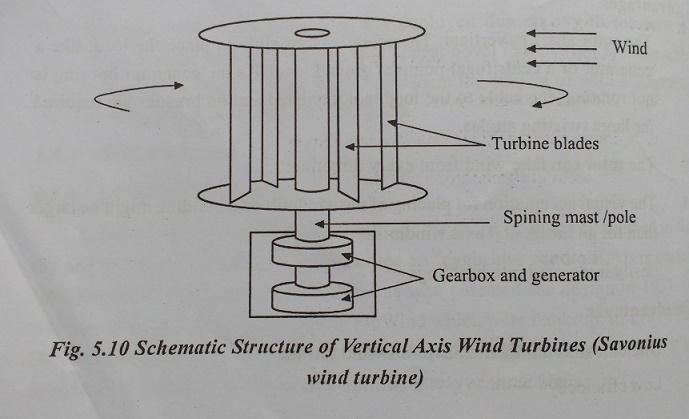 (1)   Having a vertical axis, the Savonius turbine continues to work effectively even if the wind changes direction.

(2)   Because the Savonius design works well even at low wind speeds, there’s no need for a tower or other expensive structure to hold it in place, greatly reducing the initial setup cost.

(3)   The device is quiet, easy to build, and relatively small.

(4)   Because the turbine is close to the ground, maintenance is easy.

The scoop system used to capture the wind’s energy is half as efficient as a conventional turbine, resulting in less power generation.