What is total intravenous anesthesia (TIVA), and what are its advantages and disadvantages?

TIVA is a technique in which continuous or bolus doses of intravenous infusions of anesthetic drugs are administered for induction and maintenance of anesthesia .

What is total intravenous anesthesia (TIVA), and what are its advantages and disadvantages?

TIVA is a technique in which continuous or bolus doses of intravenous infusions of anesthetic drugs are administered for induction and maintenance of anesthesia (Table 77.2). The various components of a general anesthetic—hypnosis, amnesia, analgesia, as well as muscle relaxation—can be individually provided and controlled by varying the rates of infusion, thereby influencing serum concentrations. The depth of anesthesia can be controlled in a similar manner to dialing in desired concentrations on a vaporizer.

TIVA avoids the use of all gases with the exception of oxygen, compressed air, or helium. Therefore, contami-nation of the operating room suite that invariably occurs when using volatile agents, despite the use of scavenger systems, may be eliminated entirely. Intravenous drugs are used to provide unconsciousness, anesthesia, and muscle relaxation, if desired. Because nonflammable gases may be employed, the technique is ideal for laser surgery. For procedures on the upper airway, TIVA is perfect for use with jet Venturi ventilation. Additionally, intravenous anesthesia does not depend on normal pulmonary func-tion for either wash-in or washout of active agent. 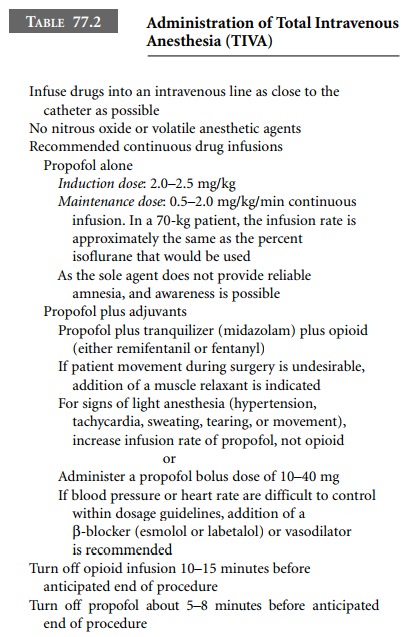 The further refinement of computer-assisted infusion systems will allow the anesthesiologist to achieve therapeu-tic blood concentrations of various anesthetic and sedative drugs. Episodes of “light” anesthesia can be treated with bolus doses or increased rate of infusion. Additional benefits of the technique are the potential for attainment of rapid awakening at the conclusion of the surgical procedure and decreased nausea and vomiting in the postoperative period in patients who receive propofol.

Since few facilities have monitors that measure the blood concentration of the intravenous anesthetics, a potential disadvantage of the technique may include the risk of patient awareness during surgery. However, presently there are sev-eral monitors that use processed electroencephalography (EEG) data to monitor the depth of sedation, and may in fact decrease the risk of awareness during a general anes-thetic. Each monitor uses a proprietary algorithm to ana-lyze EEG data to derive a linear score of 0–100. A score of 0 usually denotes complete EEG suppression while a score of 100 usually correlates with the awake unsedated state. Each monitor has its own range of numbers that correlate with general anesthesia. These monitors have proven to be very helpful intraoperatively in the decision-making tree of the anesthesiologist.

Traditionally, when a patient became hypertensive or tachycardic intraoperatively, the anesthesiologist would usually deepen the anesthetic. However, this change in vital signs can be attributed to several causes, and has been repeatedly shown to correlate very poorly with anesthetic depth. The most common of these causes are “light” anes-thesia, pain, or intrinsic hypertension. If during this period of increased heart rate and blood pressure there is a con-comitant rise in the score to above the general anesthesia level, the most likely cause is “light” anesthesia. Thus, the appropriate response would be to deepen the depth of anesthesia with a bolus of propofol. If, however, the score on the monitor of anesthetic depth remains within the range for general anesthesia, the response would be to give an opi-oid for pain. The choice of opioid would be either an ultra-short-acting opioid, such as remifentanil, for a short-lived painful stimulus (i.e., esophagoscopy) or a longer acting opioid, such as fentanyl, for a persistent painful stimulus (i.e., an incision). However, care must be taken to utilize the information gleaned from a depth of anesthesia moni-tor in conjunction with all clinical data, including the pro-cedure being done, the medical condition of the patient, the patient’s need for perfusion to the vital organs, as well as hemodynamic variables.

Monitors of anesthetic depth are particularly useful in the ambulatory setting since they have been associated with decreases in times to extubation, postoperative nausea and vomiting, and time to home readiness. Whether or not it is cost-effective to utilize this monitor on all patients has been heatedly debated in the anesthesia community.