Home | | Clinical Cases in Anesthesia | What are the etiologies of nausea and vomiting, and what measures can be taken to decrease their incidence and severity?
Posted On :  08.09.2017 11:33 am

Unfortunately, postoperative nausea and vomiting remain a significant problem in patients who receive either general anesthesia or intravenous sedation. They are among the most commonly reported complications associated with ambulatory surgery, and hospitalization following an ambulatory procedure is often attributable to them. Persistent and severe retching or vomiting can disrupt sur-gical repairs and cause increased bleeding; left untreated, they may lead to dehydration and electrolyte imbalance. From 10% to 40% of patients who have not received anti-emetic prophylaxis may be expected to experience some degree of nausea or frank vomiting. The incidence of nausea and vomiting depends on the type of surgical proce-dure performed, as well as the anesthetic administered. It has been demonstrated that patients undergoing laparoscopy have a 35% incidence of nausea and vomiting. This may be due to manipulation of abdominal viscera, retained intraperitoneal carbon dioxide, and the use of electrocautery. Symptoms occur regardless of whether a general anesthetic or epidural technique is employed. Arthroscopic surgical procedures are associated with a much lower incidence of symptoms than laparoscopic surgeries or ovum retrievals. 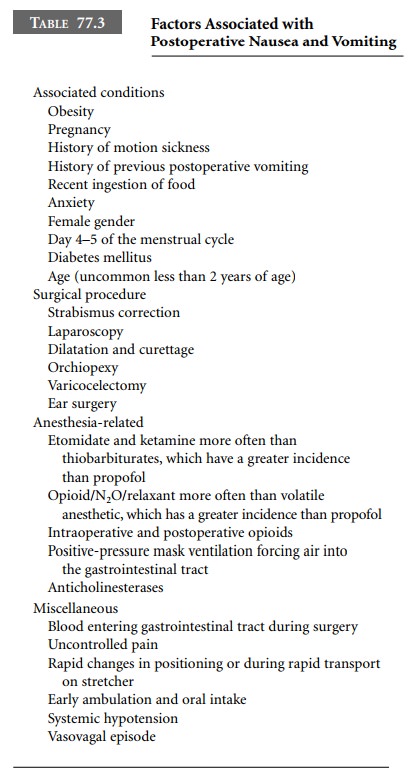 The cause of postoperative nausea and vomiting is multifactorial (Table 77.3). Obesity, sudden movement or changes in patient position, a history of motion sickness, postoperative hypotension, female gender, days 4 and 5 of the menstrual cycle, pain, opioid administration, the anes-thetic technique used, and site of surgery may all contribute to the establishment and persistence of these symptoms. They are often disquieting and sometimes incapacitating. Physical measures as well as pharmacologic agents have been employed in an attempt to reduce the incidence of these distressing sequelae. Examples include the attempted removal of stomach contents by intraoperative gastric suc-tioning; avoidance of excessive positive pressure during mask ventilation, which may force gas into the stomach; and diminished use of opioid-based general anesthesia. These have proven to have variable effects in the reduction of nausea and vomiting, probably because the problem is strongly multifactorial in nature.

Nitrous oxide has been both implicated and exonerated in multiple studies. It is unlikely that this gas plays a major role in influencing the presence or absence of nausea in the postoperative period. However, the selection of induction agent does influence the incidence of postoperative symp-tomatology. Etomidate and ketamine are associated with a much higher incidence of these symptoms when compared with thiopental. General anesthesia induced and main-tained with propofol is associated with the least number of episodes of nausea and emesis.

To help prevent symptoms, moving patients slowly from the operating room table to the stretcher, avoiding sudden turns during transport to the PACU, and allowing patients to wake up slowly have been applied with some measure of success. Warm blankets and repeated verbal reassurance may reduce overall anxiety by increasing feelings of well-being and a sense of security. A vigorous stir-up, sit-them-up reg-imen with early oral intake is likely to precipitate nausea and vomiting. The end result of significant symptomatology is an increased length of stay in the PACU. For the patient with unremitting symptoms, overnight admission for observation and further treatment with anti-emetics and intravenous fluids to prevent dehydration may be required.

Adequate hydration must be ensured during the opera-tive period as well as maintained in the PACU. To avoid pre-cipitating episodes of nausea or vomiting postoperatively, it is recommended to hydrate vigorously intraoperatively with at least 15–20 mL/kg of crystalloid solutions and to avoid pushing oral fluids and food. Intravenous fluid repletion allows oral fluids to be offered sparingly. Solids should be withheld until the patient expresses hunger. In addition, postponing early ambulation may help to reduce symptoms.

Prophylactic administration of dexamethasone (4–10 mg IV) at the beginning of the procedure, and metoclopramide (10 mg IV) have been advocated. Droperidol, a potent anti-emetic, has fallen into disfavor because of its association with QT prolongation and torsades de pointes. This led the FDA to issue a black-box warning regarding its use. The FDA’s rec-ommendations have been challenged because of droperi-dol’s long history of efficacy and rare occurrence of adverse events. If one decides to administer droperidol, a baseline ECG should be performed, and the QT interval should be measured. Furthermore, the ECG should be monitored during its administration (Table 77.4). 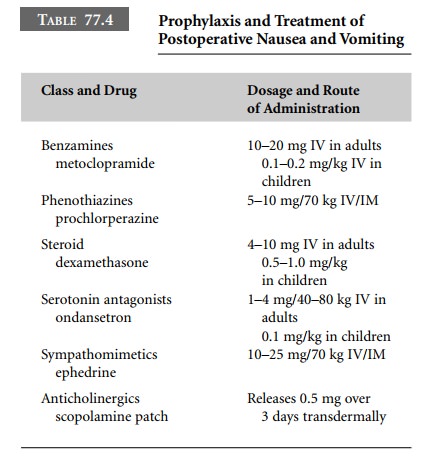 Unfortunately, clinically significant side-effects have been reported with these agents. These include prolonged sedation and delayed awakening, an increase in anxiety as well as restlessness, and extrapyramidal symptoms. Acute dystonic reactions including torticollis, tics, or an oculogyric crisis can be treated with diphenhydramine, 25–50 mg, or with benztropine, 1–2 mg, intravenously or intramuscularly.

Transdermal scopolamine, proven earlier to be effica-cious in the prevention of motion sickness, has been studied for the prevention of postoperative nausea and vomiting. Although effective in reducing symptoms when applied 12 hours before surgery, significant side-effects including dry mouth as well as sedation, dysphoria, and urinary retention may occur. It is often reserved for preoperative use in patients who have a strong history of motion sickness. In the pediatric age group, the incidence of visual distur-bances and hallucinations after application of the patch is increased. Some clinicians have placed the patch before discharge in patients whose nausea has not completely resolved. However, the patch should be avoided in the geriatric population, pregnant or lactating patients, and in patients with glaucoma.

Ephedrine has been used in the treatment of nausea and vomiting in the PACU. Hypotension or documented postural hypotension in the postoperative period is often due to an intravascular volume deficit and should be ruled out. Treatment consists of crystalloid infusion to correct hemo-dynamic instability. Ephedrine has been demonstrated to be useful in patients whose symptoms are causally related to assuming the upright position. Ephedrine, 0.5 mg/kg given intramuscularly, has been used in laparoscopy patients with some success. Patients who received ephedrine also had lower sedation scores, and no differences in mean arterial blood pressure were noted. It may be indicated in other-wise healthy patients who have a history of motion sickness or in those patients who experience dizziness, nausea, or vomiting when attempting to ambulate in the postopera-tive period.

A popular drug in the anesthesiologist’s armamen-tarium against nausea and vomiting, ondansetron, is a serotonin receptor antagonist with possible central and peripheral sites of action. It does not appear to affect awakening from general anesthesia and has no extra-pyramidal effects or sedative qualities. Ondansetron appears to offer improved control over both nausea and vomiting. The effective dose is 2–4 mg intravenously and has a duration of action of up to 24 hours. An oral for-mulation is also available. It has been demonstrated that a combination of agents, perhaps in conjunction with propofol, will prove to be most efficacious in the prophyl-axis of nausea and vomiting.

Many surgical centers have abandoned the routine administration of prophylactic anti-emetics to every patient. However, anti-emetic regimens should be admin-istered for specific surgical procedures, such as strabismus repair or laparoscopic surgery, that are associated with an extraordinarily high incidence of postoperative nausea and vomiting.

Sometimes simply relieving postoperative pain may alleviate nausea. The use of acupuncture has been reported in some studies to be effective, but its use is not wide-spread. A propofol-based anesthetic is associated with fewer emetic symptoms, earlier ability to tolerate oral ali-mentation, and shorter stays in the PACU when compared with induction with a thiobarbiturate and maintenance with isoflurane. Unfortunately, despite careful anes-thetic management including propofol and even prophyl-actic medication, symptoms of nausea and vomiting in the postoperative period still remain a problem.

Study Material, Lecturing Notes, Assignment, Reference, Wiki description explanation, brief detail
Clinical Cases in Anesthesia : Ambulatory Surgery : What are the etiologies of nausea and vomiting, and what measures can be taken to decrease their incidence and severity? |