When two atoms with the same electronegativity form a bond, the electrons are shared equally between the two atoms. 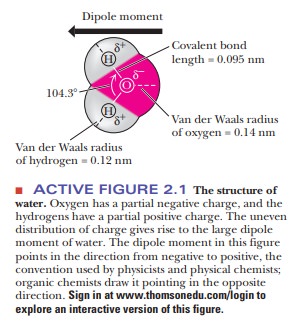 The bonds in a molecule may be polar, but the molecule itself can still be nonpolar because of its geometry. Carbon dioxide is an example. The two C=O bonds are polar, but because the CO2 molecule is linear, the attraction of the oxygen for the electrons in one bond is cancelled out by the equal and opposite attraction for the electrons by the oxygen on the other side of the molecule.

Water is a bent molecule with a bond angle of 104.3° (Figure 2.1), and the uneven sharing of electrons in the two bonds is not cancelled out as it is in CO2. The result is that the bonding electrons are more likely to be found at the oxygen end of the molecule than at the hydrogen end. Bonds with positive and negative ends are called dipoles.