The tank outlet or drain normally has two functions: 1, to remove the waste from the tank as quickly as possible, before the leakage of nutrient starts; 2, to maintain the correct water level inside the tank.

The tank outlet or drain normally has two functions: 1, to remove the waste from the tank as quickly as possible, before the leakage of nutrient starts; 2, to maintain the correct water level inside the tank. Correct design of the outlet is also important for the water exchange rate and to ensure effective self-cleaning. Incorrect specification of the outlet system or the outlet pipe may result in settling of uneaten feed particles and faeces, and the outlet system will function as a settling basin. This situation can be rectified by shock draining the tank, by removing the device that controls the tank water level. Shock draining will increase the water velocity through the outlet above normal and eventually settled solids will be dragged out. If there are large number of particles coming out, there may be places in the outlet pipe system where settling of solids occurs if the design of the outlet system is sub-optimal. It should not be necessary to shock drain a well-designed outlet system to remove particles that have settled in the outlet. The outlet pipe should be designed for water velocities above 0.3 m/s to ensure no settling of solids. Velocities above 1.5 m/s in the outlet will result in rough treat- ment of the particles which may break up. This makes later filtration of the outlet water more difficult.

It is important to treat the outlet water as gently as possible to avoid increased particle breakage. Elbows and other pipe parts that create additional turbulence should therefore be avoided. It is important to use long bends and small bend angles in the piping. It is also important to understand that the inlet and outlet of a tank are designed for a given flow rate, but with some latitude outside which the inlet and outlet will not function optimally because the velocity is either too low or too high.

The supply of water to a fish tank with a farming volume of 6 m3 should be between 60 and 200 l/min to ensure sufficient self-cleaning. Find a suitable diameter for the outlet pipe.

Choose a velocity of 0.5 m/s and calculate for the smallest amount of water. 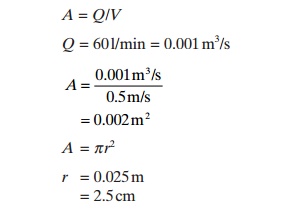 The next task is to calculate the water velocity in the pipe with the largest amount of water when the radius of the pipe is 2.5 cm.

A larger dimension for the outlet pipe is recommended because this velocity is rather high. This also shows that the outlet system is not designed optimally if there is too large a variation in the water flow.

When designing the outlet system, it is important that the outlet creates a drag on the water in the tank. Particles lying close to the outlet will be forced against the outlet by the reduced pressure there.

The design of the outlet can be either of the flat or tower type (Fig. 13.11). The flat outlet contains a horizontal screen inside the fish tank, adapted to the fish size. This normally covers an outlet pot. From the outlet pot the outlet pipe goes to a vertical standing pipe where the water level inside the tank is controlled. It is important to increase the speed through the holes in the outlet screen to avoid fouling and blockage. Velocities above 0.3–0.4 m/s are recommended. The outlet screen is a perforated sheet of stainless steel, aluminium or plastic. Good results have been achieved by using oblong slots instead of holes in the outlet screen. Slots do not clog as quickly and are easier to clean. The holes or slots are recommended to be as large as possible, but of course not so large that fish escape. It may also be possible to run the tank without any outlet screen, because the fish prefer not to go down in the outlet pipe. However, this is species dependent, and some species that have a crowding behaviour, such as eel, will go down. For salmonids, the author’s experience is that it is possible to run without any outlet screen. If this is done it is necessary to install a trap in the outlet system to collect the dead fish (see Section 13.11). 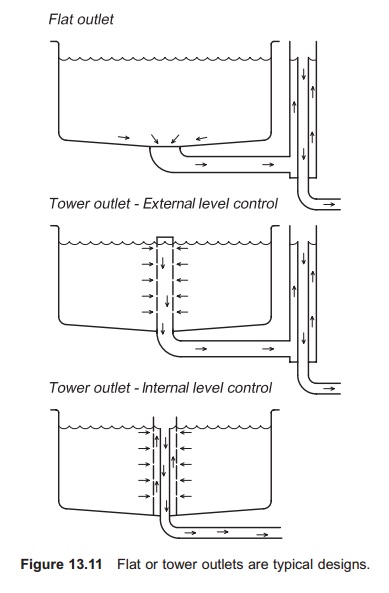 The outlet pot, if used in the tank, has been shown to be a critical part of the construction (Fig. 13.12). Settling of solids is very common here. It is therefore important not to reduce the water velocity in this pot too much, both to prevent set-tling of particles and also to reduce the amount of fouling. Good results are obtained by using an eccentric outlet from the pot; here the outlet pipe from the pot is not in the centre but to one side, and a swirl is therefore created inside the pot. Another possibility is to avoid the use of the outlet pot 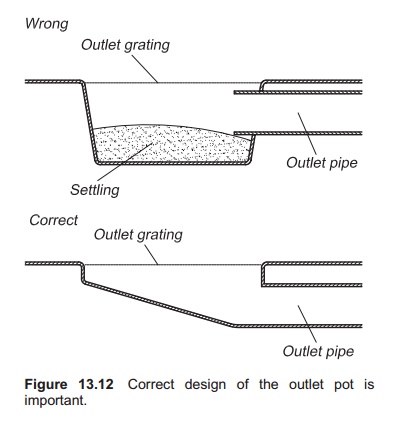 totally by having the outlet pipe directly into the tank bottom. This requires the use of another type of outlet screen inside the tank (not a horizontal one) to ensure enough hole or slot area. Outlet screens may, for instance, be shaped like a cone, pyramid or a small tower, not reaching the water surface.

There are two types of tower outlet, with either internal or external regulation of the water level. In both cases there will be a tower inside the tank going from the bottom to the water surface, consisting of a screen with holes or slots that prevent the fish leaving the tank. The disadvantage of this outlet is that the presence of the tower in the middle of the tank may make it difficult to handle the fish in the tank. With regard to self-cleaning, no differences have been observed between flat and tower outlet systems.

Instead of taking the outlet from the bottom of the tank, a siphon can be used. Here the outlet from the tank goes over the top edge of the tank; however, this will require a fixed water level. The advantage with the system is that it is not necessary to have any pipes going out of the bottom of the tank, which is therefore only a basin. This reduces the cost and increases the second hand value. The disadvantage is that it is not possible to reduce the water level because it is fixed; a pump must be used to drain the tank completely.