It is also possible to use a double outlet, i.e. a dual drain.

It is also possible to use a double outlet, i.e. a dual drain (Fig. 13.13). Such an outlet allows part of the water flow (up to 5% of the total flow) to be taken through a separate centre drain located in the bottom of the tank, while the main water flow is taken out from the water column above the tank bottom through some type of tower outlet. This can be a traditional tower outlet or a small tower reaching 5–10 cm up from the tank bottom. In this way the tank is used as the first effluent treatment system. A particle purification step is achieved because the tank functions as a swirl separator using the ‘tea-cup’ principal. The circular flow pattern in the tank will cause the solids to be colleted in the centre of the bottom where the particle outlet is located. Normally over 90% of the solids be taken out via the bottom outlet. Hence the particle concentration will be significantly reduced in the main outlet that is taken out slightly higher up the water column. 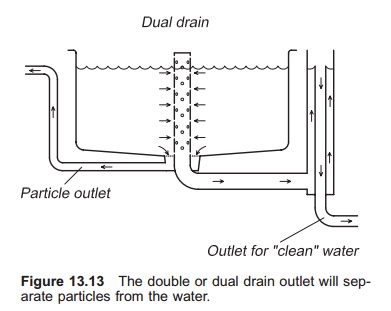 The main water flow may also be taken out via a sidewall. By taking out up to 20% through the bottom and the rest through the outlet in the upper part of a tank wall, good separations have been achieved. A specially designed square tank with cut corners, with the main inlet and main outlet in the corners and the particle outlet in the centre, has also been used with good results.20Here less than 1% of the total water flow was taken out via the particle outlet. In both the above two systems the flow pattern inside the tank gave satisfactory self-cleaning. In the last system the place on the tank bottom where the main effluent collected was easily regulated by changing the direction of the nozzles in the inlet pipe; these were adjusted to force the effluent towards the middle of the tank where the particle outlet was located.

By using dual drain systems the cost of particle purification will be reduced because only a minor part of the total water flow has to be purified; the size of the particle filter will be reduced dramatically. If using a water re-use system, the water in the main outlet may be re-used without going through a particle separation step as the concentration of particles is already low enough.

Handling facilities can also be an integral part of the tank construction. Additional outlets used only for guiding the fish to a common centre, or hatches in the tank walls for trans-port of fish through channel systems, can be inte-grated.21 The tank may also be constructed to include guides for adapting tank internal grading grids.

A feed detection unit may also be integrated into the tank outlet system.