Human civilization through gradual application of science and technology, have utilized water resources for economic, political and military activities.

“Water is a free gift of nature’. Human civilization  through  gradual  application of science and technology, have utilized water resources for economic,  political  and military activities. Remarkable advancements are taking place in water transport due to considerable improvement in the construction, design motive power, speed and safety of ships and boats.

Water transport is the process of moving people, goods etc. by barge, boat, ship or sailboat over a sea, ocean, lake, canal, river, etc. This category does not include articles on the transport of water for the purpose of consuming the water. Water Transports are of two types

Inland Waterways comprise of rivers, canals and lakes. It is also known as  internal water transport. Rivers that are naturally navigable are called natural waterways. Canals and canalized rivers belong to the category of ‘Artificial Waterways’. Generally small boats  and  steamers  are  operated  on rivers to transport people and goods. Where rivers are deep enough, large ships can also ply on them. Canals are man- made waterways, constructed for the twin purposes of navigation and irrigation. 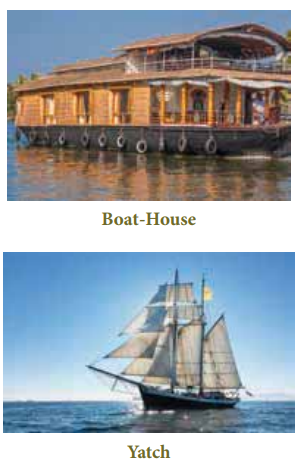 ·           It carries goods smoothly due to the absence of shaking and jolting during transit. It is eminently suitable for the carriage of fragile goods like glassware, earth ware etc., without causing damage.

·           Initial investment on river services as well as expenditure on their maintenance is much lesser as compared to road and rail transport.

·           Floods caused during rainy season, lack of flow of water during summer season affect to ply boats and steamers.

·           Sometimes rivers also change their way. It leads to stoppage and uncertainty in usage of this means of transport.

Ocean transport may be divided into two broad categories. 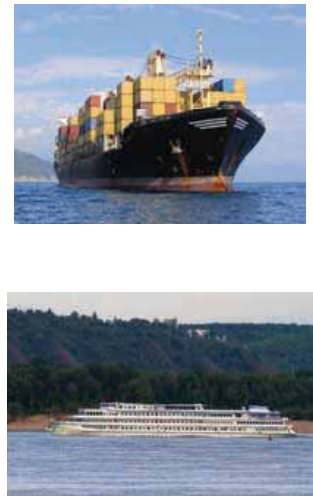 It means the passengers’ and goods have to cross ocean. Example India export goods to America.

Ocean going ships may also be divided into two, namely Liners and Tramps:

An ocean liner is a passenger ship primarily used as a form of transportation across seas or oceans. Liners  may  also  carry  cargo or mail, and may sometimes be used for other purposes (e.g., for  pleasure  cruises or as hospitals ship). They sail to schedule, whether they have a full load or not. They follow defined routes with fixed places and times of call. Regularity of service, god sped and luxurious facilities to passengers are the specialties of liners.

There are two types of liners, namely,  Passenger liners and Cargo liners.

Tramps are essentially cargo vessels. See the picture above. They have no set routes. They do not follow any timetable. They sail only when they get sufficient load. They sail at any time and carry cargoes for almost any ports.

The following is the major types of commercial ships